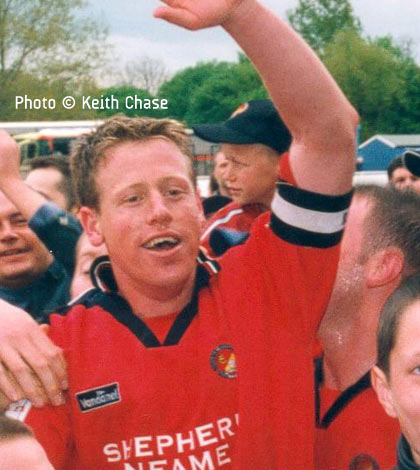 One apiece in Kent showpiece

You wait more than 10 years for a Dover-Fleet cup final, then two of them come along at once! Dover’s noteworthy 3-0 triumph over Sutton with 10 men has set up a tantalising Skrill South Promotion Final – but before that comes the county cup clash.

Meeting for the third time in a Kent Senior Cup Final – and third time this season – Fleet and Dover currently share the spoils, both having won a final against each other in the recent past.

The first was more than 20 years ago – in 1990-91 – and also took place at Priestfield, as Dover – then, as now, managed by Chris Kinnear – beat Eddie McCluskey’s Gravesend & Northfleet with the only goal of the game. Fleet had already excelled in reaching the final, having beaten then-Football League side Maidstone United after extra time in the semi-finals – one of the great Stonebridge Road nights of the early Nineties.

Fleet were in all sorts of bother heading into the final that season, having finished second from bottom of the Southern League Premier Division and wondering whether the fate of Rushden Town would save them from relegation (it eventually did). Dover, by contrast, were flying high, having finished fourth in the same division (they would finished second the following season, and go up to the Conference as champions a year after that).

On paper, the Fleet side was a good one. Left-back Paul Hennessy – who would later join Dartford – was a lynchpin in defence alongside former Barnet and Enfield veteran Nicky Ironton. Ex-Charlton youth Roy Parkyn filled midfield and there were a couple of players left from Fleet’s promotion-winning side two years earlier: Gary Groom in midfield, John Palmer on the bench and Colin Blewden up front. Blewden, perhaps the most talented of the bunch, would move to Dover in the summer for £6,000 and form a major part of their push to the Conference.

The final attracted a decent gate of 1,704 to Priestfield and Fleet had an opportunity to inflict an upset when Dover midfielder Joe Jackson punched the fiery Ironton on 35 minutes and was duly sent off. In the aftermath, former Dover striker Micky Cotter – on the bench for the Fleet – earned the dubious distinction of being booked before even kicking a ball. Fleet had another player booked, while the Dover physio saw yellow and Whites’ Tony MacDonald was cautioned in the tunnel for “staring fiercely” at the referee.

But Fleet were undone straight after the sending-off when ex-Charlton striker Leroy Ambrose was set up by Mark Harrop – another who would later swap clubs as he became part of Fleet’s 1993-94 promotion side. Ambrose also hit the post, but Fleet with 11 men were much the better side after the break. Local youth Chris Fordred led the line alongside Mal Watkins – whose son Luke played in goal for Whitstable at Stonebridge Road this season – and his aerial threat helped Fleet win 10 corners in the second half.

Ironton had a header cleared off the line, Parkyn had a free-kick palmed onto the bar and Fleet’s last throw of the dice, Cotter on for Groom, came to nothing as Dover finished the game on the counterattack and had chances to extend the lead to 2-0. Fleet boss McCluskey bemoaned his side’s inability to take chances. “Dover were there to be beaten,” he later said. “But to be honest I couldn’t see how we were going to get a goal. Considering the terrible season we’ve had it’s some achievement to reach the final.”

McCluskey’s close season improved when Fleet were saved from relegation – but it was a stay of execution as his side performed even more poorly the following campaign and were relegated again, this time for certain.

Dover, of course, went from strength to strength – but never won another Kent Senior Cup. They reached two more finals – in 1994 and 1997, losing to Margate and Bromley. Fleet’s next appearance was a defeat to Margate in 1998, but they won it in 2000 against Folkestone before another clash with Dover arrived in 2001.

Bill Williams’ Dover, still in the Conference, fancied their chances at home against Ryman League Fleet but in Jimmy Jackson’s testimonial season, the visitors put on a majestic performance. Jackson (pictured), captaining the side in the absence of Scott Lindsay, won man of the match. A crowd of 1,002 saw Che Stadhart return from injury to fire Fleet’s first goal off the underside of the bar. It was a welcome respite for boss Andy Ford who had played much of the latter months with only one striker and even had to re-sign Steve Restarick, who had joined Welling earlier in the season, for a one-off appearance in the final.

Twenty minutes in and it was 2-0, Darren Smith’s corner headed home by Craig Wilkins – who after a distinguished Fleet career would later give equally great service to Dover.

Fleet doubled their lead in the second-half, Aaron Barnett’s cross turned into his own goal by Stuart Munday and then Jackson – another who later played for Dover – made it 4-0 on 80 minutes from the penalty spot. Dover fans slow-clapped their side and chanted “what a load of rubbish” as Jackson lifted the cup with club captain Lindsay, who had been dropped for the game.

The 4-0 thrashing was a sign of things to come, with Ford’s Fleet – his team more or less the one that had won the KSC at Crabble – racing to the Ryman League title the following season and replacing Dover in the Conference. Fleet’s Kent Senior Cup haul would continue too, with a 5-0 thrashing of Chris Kinnear’s Margate at Hartsdown Park rounding off three Kent titles in succession between 2000 and 2002.

Ed Miller has been Ebbsfleet United's communications manager and programme editor since 2014 and responsible for the club website since 2007. Contact him on ed.miller@eufc.co.uk
PrevPreviousFleet boss mulls options for finals double-bill
NextDover Athletic 0-4 FleetNext