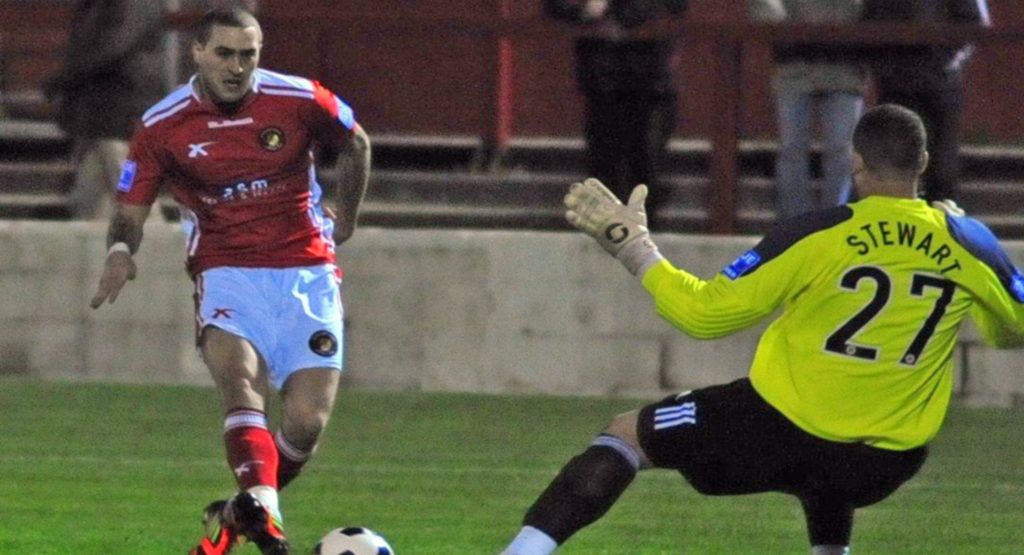 Today we would have hosted one of the season’s trailblazers in St Albans City at the Kuflink Stadium on a day that’s been quite a busy one down the years, with no fewer than 18 games played on March 27th in Fleet history.

In that time, it’s been a fairly even spread of games with seven wins, two draws and nine defeats, four of those coming one after the other in the luckless Sixties. There wasn’t much happening at Stonebridge Road on March 27th in that period either, with all seven fixtures on this day between 1963 and 1982 on our travels and a gap of almost 30 years between home games, from 1955 to 1984.

Our games in 1964 against Yiewsley and 1976 versus Hillingdon Borough were actually against the same club, with a name change effected to reflect the local government reorganisation in London.

27th March 2012
Fleet 1-2 Alfreton Town
With Fleet pretty much safe from relegation in the season following our bounceback promotion, this was a disappointing reverse against a side that did have real fears of the drop. Alfreton Town’s first ever visit to Stonebridge Road didn’t exactly entice the public on a cold Tuesday night, with just 687 turning up. In his first loan spell with the club, a young Gozie Ugwu supplied the pass for Liam Enver-Marum to fire the home side into an early lead as Fleet threatened to run rampant for the opening half-hour. Enver-Marum and Neil Barrett both spurned further gilt-edged chances, allowing the visitors to settle and future Fleet striker Adam Cunnington headed in a corner on 35 minutes. Alfreton built on that only three minutes into the second half when Josh Law converted from another corner, past Lance Cronin who had returned to the club on loan from Bristol Rovers. Alfreton ended the season on equal points with the Fleet, one place behind on goal difference.

27th March 1999
Fleet 2-1 Sutton United
Until very recently, Sutton United had never had much luck at Stonebridge Road and they got nothing on this visit despite being league leaders in a season where they ended up romping to the title and promotion by 11 clear points. But Fleet edged this one in front of a crowd of 536 despite having lost Jimmy Jackson for the season to ligament damage in a midweek friendly with Guru Nanak. Instead there were two fresh signings to form a new strike partnership, ex-Gillingham and Leyton Orient frontman Mark Cooper along with Steve Callinan from Barton Rovers. Bruce Sewell got Fleet off to a flying start on 13 minutes and debutants Cooper and Callinan combined at the end of the first half, Cooper’s header allowing Callinan to tap home for 2-0. The win ended a period of four straight defeats in style for the Fleet, despite Sutton mounting a late fightback in a poor second-half for Andy Ford’s men. It was a patchy season, Ford’s first full one in charge, that left little to impress the locals, Fleet finishing in 10th place. But the manager had begun to assemble the side that would press its claims in the division over the next few seasons and he was unlucky with injuries and player turnover in 1998/99.

27th March 1948
Colchester United 6-1 Fleet
A thorough whopping for the Fleet at Layer Road as our second season in existence that had begun with such promise was already fuelling rumours that we might not see far beyond the end of it! The summer before Fleet had promised to match the £20 a week going rate for the top professional players but by mid-season the directors had asked those players to take a 30% wage cut. The squad refused and the directors financed the club out of their own pockets until the end of the season but it had an effect on results, with a mid-season slump that included a few hefty beatings. This was one such as Colchester “ran riot” according to contemporary reports, scoring all six goals in the opening 25 minutes. Fleet’s defence was somewhat kindly described as “none too sure” and although the U’s eventually stopped the goal avalanche, the visitors managed only one of their own with the wind in their favour in the second half, Fleet’s goal scored by Peter Elliott. One mystery of this game remains in that stalwart local defender Sam Chambers was named twice in the team lineup in match reports… so may possibly be credited with two additional appearances in his huge total for the club!

Ed Miller has been Ebbsfleet United's communications manager and programme editor since 2014 and responsible for the club website since 2007. Contact him on ed.miller@eufc.co.uk
PrevPreviousNational League Statement- Club Charges
NextClassic Fleet shirts make a comebackNext