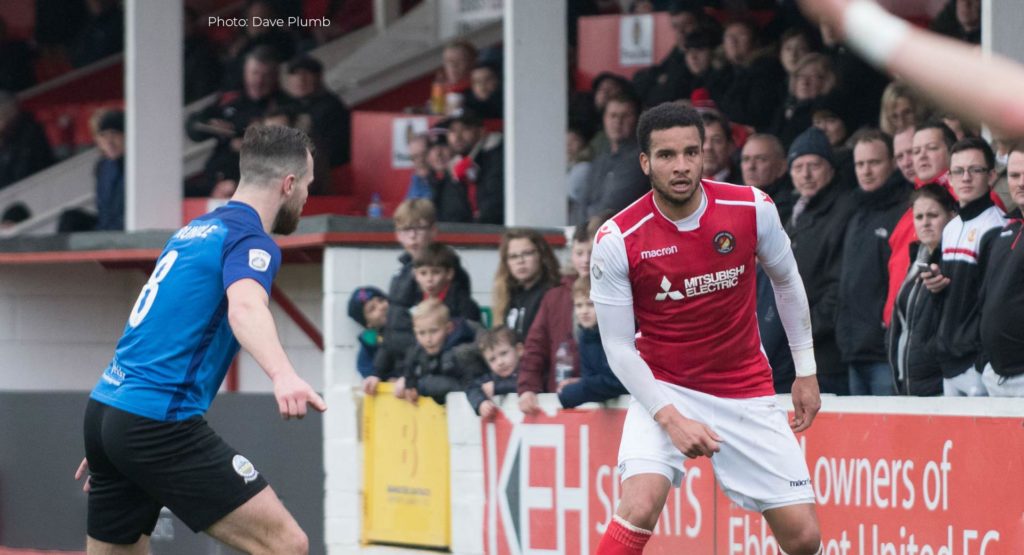 On This Day: April 2nd

A Good Friday trip to Hungerford Town was on the cards as scheduled this season – the first match between the clubs in 2020/21 having been arguably one of the best games of the campaign when Bobby-Joe Taylor’s excellently worked goal was the difference in a 3-2 win for the 10 men of the Fleet.

April 2nd in Fleet history has some good recent memories and we have lost only once since 1988 in all meetings on this day. Games in the 20th century on this day aren’t particularly memorable and indeed few will recall our opponents this day in 1983 – Addlestone & Weybridge Town! The Surrey club, formerly Addlestone FC, played Fleet a couple of times in the Southern League before selling their ground and then dissolving in 1985.

More recently, however, April 2nd games have provided much good cheer. A Ricky Shakes brace at Basingstoke kept our play-off ambitions on course in 2011 and there were two very memorable games a few years later, as described below…

2nd April 2018
Fleet 2-1 Dover Athletic
A sharp improvement in Fleet’s win ratio in the early part of 2018 kept the play-off dream alive for Daryl McMahon’s side. Four wins in quick succession had been followed by two draws so it was still very much in the balance and visitors Dover had their own ambitions for the play-offs. Fleet had the better of a humdrum first-half but 10 minutes into the second half, it was Sean Shields who broke the deadlock, his usual twist and turn into the box allowing just enough room for a low shot through a crowd into the corner of the goal. Fleet held on to the lead until late, home supporters tantalisingly close to their first league win at Dover’s expense in 40 years. But five minutes into time added on, drama ensued. Chris Bush upended Giancarlo Gallifuoco in the box and substitute Keanu Marsh-Brown slotted home the penalty. With the red majority of the 1,735 crowd still holding their heads in their hands, one last forward flourish from the Fleet earned a free-kick. Myles Weston slung it across, Kenny Clark swiped at it but missed and it fell for Andy Drury who kept his head to fire home an unbelievable late winner and spark joyous scenes around the ground. That sparked another mini-run of four wins in five for the Fleet whose late-season form earned a play-off berth.

2nd April 2016
Hayes & Yeading United 0-5 Fleet
In a season where Fleet had once been so certain of the title, the remorseless unbeaten spectre of Sutton United had finally appeared over the horizon and overhauled us. Daryl McMahon’s side managed just two wins in nine before this game, dropping points with a host of draws as the campaign neared its end. But in bright spring sunshine at Maidenhead’s York Road, shared that season with homeless Hayes & Yeading United, a buoyant performance put a smile back on the travelling fans’ faces. Only 287 witnessed Fleet demolish Hayes and gain revenge on home skipper Darren Purse whose part in a four-man sending-off incident earlier in the season at Stonebridge Road had painted him as the pantomime villain for this one. It was pretty much the Matt Godden show as the in-form frontman grabbed four goals to take his club tally past 40 and he scored the Fleet’s first on seven minutes. Despite bossing the game, it took until first-half injury time for Fleet to add another, Godden’s half-volley crashing in off the underside of the bar. Godden’s hat-trick arrived on 68 minutes and he thundered home his fourth on 74 with Fleet fans recalling Steve Portway’s double hat-trick blast more than two decades earlier and wondering if Godden might do the same. In the end, it was Charlie Sheringham – on for Godden as substitute – who added the finale with a finish from close range. Sutton, however, continued to tally up their points by winning their games in hand and though Fleet followed up this win at Hayes with two more victories, defeat at Sutton in between sent the title to Surrey.

2nd April 1960
Fleet 3-3 Kettering Town
It was 1958’s Southern League champions at home to the kings of 1957 – but the class of 1960 on both sides was a step down from those that had preceded them. By the start of this new decade, Kettering were bottom of the Southern League and the Fleet had seen better days, too, adrift in the bottom four also as Lionel Smith’s tenure as manager ran into its final month. A week earlier, injury-hit Fleet had crashed 7-1 at Essex rivals Chelmsford City and the Stonebridge Road faithful were rapidly losing that faith, with a couple of attendances dangerously close to three figures. This one wasn’t far off that, with 1,195 watching an exchange of six goals. That season’s top scorer, former England Amateur international Jimmy Fletcher, added to the goal he got in the debacle at Chelmsford with a hat-trick here, Bill Draper and Andy Easton (2) responding for the Poppies. While a draw was disappointing, it ended a run of six straight defeats for the Fleet. However, Smith’s side also lost their last six, including the return fixture at Kettering, all those matches packed into less than three weeks, to leave Fleet 17th at the end of the campaign. Hat-trick hero this day, Jimmy Fletcher, went on to train greyhounds in later life, winning £200,000 on one of his races in 1991. He passed away only last year, in November 2020.

Ed Miller has been Ebbsfleet United's communications manager and programme editor since 2014 and responsible for the club website since 2007. Contact him on ed.miller@eufc.co.uk
PrevPreviousClassic Fleet shirts make a comeback
NextTake 20% off your junior shirts now!Next