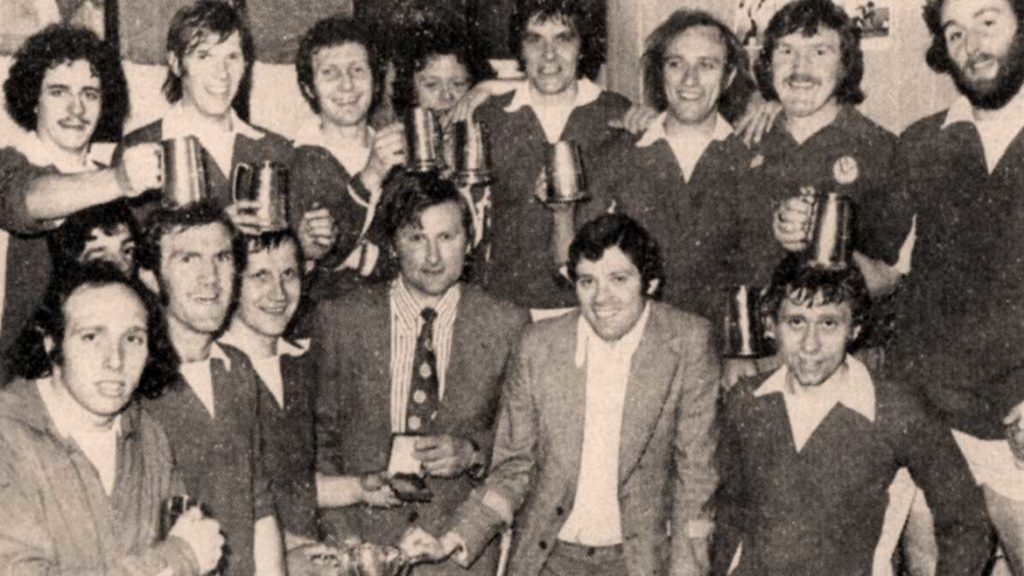 So here we are then. The final matchday of the abortive season that would have seen us travel to Aldershot Town, scene of two of the greatest Fleet triumphs of the 21st century.

It’s a date that has served as the end of the season numerous times before, with two notable games in 2013 and 2015 seeing the end of Liam Daish’s reign and the start of Daryl McMahon’s respectively.

We’ve won a league title on this day (see below) and in 2011 qualified for the Conference South play-offs in a 0-0 draw at Thurrock, while in 1959 secured runners-up berth in the Southern League the season after winning it.

25th April 1975
Fleet 3-0 Metropolitan Police
One of the decade’s highlights, this Friday evening celebration drew 1,310 to see Fleet lift the Southern League Southern Division title, even though that had already been clinched two weeks previously. Manager Tony Sitford had masterminded only the club’s second league title, losing just two games across the whole season. This 3-0 win over mid-table Met Police was Fleet’s 15th win in 18 since the last defeat and the four-figure crowd enjoyed the celebrations as the Fleet players climbed the steps in the Main Stand to take take the applause, receive their souvenir tankards and hold aloft a ‘Champions’ scarf in red and white. The result was fairly immaterial as Pip Jeffrey, Dave Bostock and John Thurgood scored the goals to take another two points and Fleet’s Seventies ascendancy continued in some style.

25th April 2013
Fleet 1-2 Tonbridge Angels
This Kent Senior Cup semi-final was a game that the precious few who attended even cared about. There was a very real fear that this would be the last match the Fleet would ever play as financial chickens came home to roost. Supporters took pictures around the ground and some contemplated removing bits of turf as the writing seemed to be on the wall as to the club’s future. As for the football, relegated Fleet had returned from the last game of the season against Gateshead at far-flung Middlesbrough with just enough in the tank to see off Margate in the Kent Senior Cup quarter-final. But this semi-final two days later on a Thursday night proved too much. Liam Enver-Marum who had scored a hat-trick against Margate got another one here but Tonbridge prevailed. That was that for a tough season and it spelled the end of an era with the likes of Liam Daish, Craig Stone, Neil Barrett, Ram Marwa and Ashley Carew all marking their final games for the club. It probably should have spelled the end for Stonebridge Road and the Fleet as well but weeks later KEH Sports invested in the club, bought out MyFC and the current ownership model began.

25th April 2015
Fleet 4-0 Bishop’s Stortford
Daryl McMahon had been released from Boreham Wood’s promotion tilt to take the reins on a caretaker basis at the Fleet following the sacking of Jamie Day. And he immediately made his presence felt with a couple of changes as Michael West and Sean Shields replaced Danny Kedwell and Luke Rooney. In bright sunshine, previously lacklustre Fleet tore into Stortford with a vibrant, attacking display. Matt Johnson got the opener against his former club and Adam Cunnington turned home Matt Godden’s delivery before the break. It was the same story in the second half as Fleet once again scored twice, Stuart Lewis’ screamer making it 3-0 and Cunnington again completing the scoring by the 54th minute. This match was supposed to serve as the curtain call for the Liam Daish Stand, due to be demolished that summer, and as a large part of the 954 supporters gathered beneath its roof for one last photo opportunity. In the event, the stand build was delayed and it survived a further season. There was quicker work on the managerial front with McMahon confirmed permanently in the job five days later.

Ed Miller has been Ebbsfleet United's communications manager and programme editor since 2014 and responsible for the club website since 2007. Contact him on ed.miller@eufc.co.uk
PrevPreviousSeason Review Part 1: The summer
NextSeason Review Part 2: AugustNext