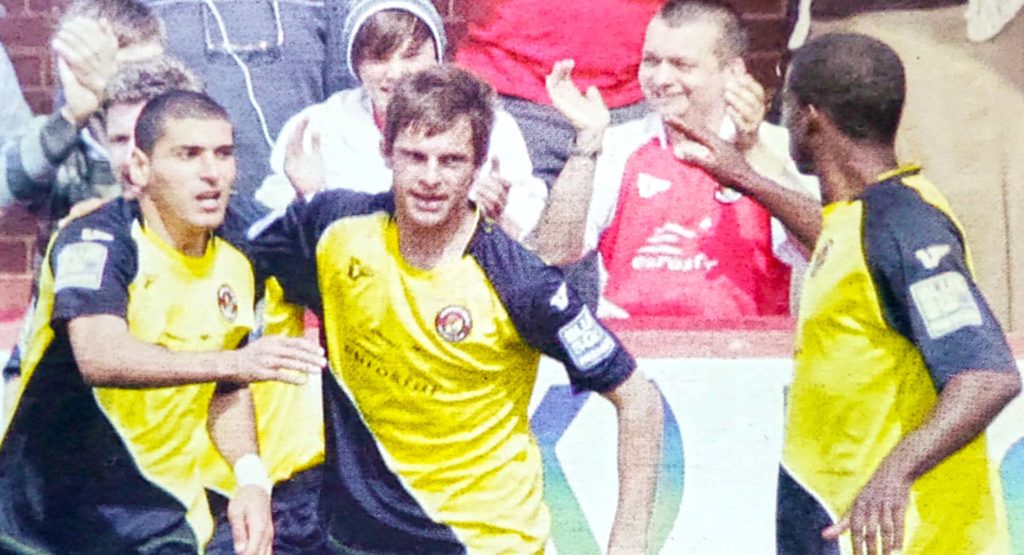 Today’s match would have witnessed Part 4 of the epic Fleet-Chippenham head-to-head of 2020/21, with the Kuflink Stadium earmarked to host a league fixture as the Vanarama National South headed towards its climax.

Fate instead conspires us to look back on previous April 24ths instead and our three matches in focus below include a cruel relegation, a what-might-have-been and a qualification for the club’s second final of its then short history.

Elsewhere, April 24th has also seen us with our minds on play-offs. In 2014, we qualified for that season’s Skrill South play-offs by clinching a 2-1 win away in a rearranged match at Concord Rangers after the first game’s floodlights had failed. And three years ago a long trip to Gateshead on a rainy Tuesday night saw a Danny Kedwell hat-trick blast him through the 50-goal mark for the club and leave Fleet on the verge of play-off qualification ahead of the season’s final game at the other end of the country in Torquay.

The relegation of 2010 aside, it’s generally been a good day in Fleet history with only three of 17 games lost down the years. We have been paired with Rugby three times on this date, facing Rugby Town in 1963 and 1971 and their successors VS Rugby in 1990. And finally, 1980’s win at relegated Redditch drew one of the lowest crowds to ever watch the Fleet at Alliance/Conference/National League level, with just 260 at the Valley Stadium for that.

24th April 2010
Tamworth 3-4 Fleet
Seemingly destined for relegation since the first kick of the 2009/10 season, Liam Daish’s hastily assembled squad of youngsters was gradually honed, improved and experience added to the extent that a huge effort against the drop rallied the whole club as the business end of the campaign hoved into view. A useful front partnership between Magno Vieira and Moses Ashikodi had provided some much-needed wins and crucial victories over Eastbourne Borough and Gateshead kept Fleet in with a shout as the season’s final match took us to Tamworth. That said, Chester’s expungement (taking three of our points with them), a winless run through March and the form of sides around us made the trip to the Midlands something of a Mission Impossible. Not that it failed to dampen the spirit of Fleet fans who travelled in huge numbers among the 1,694 crowd to see probably the most exciting – and yet disappointing – match of the whole season. Needing a win, Fleet did just that, coming back from an early goal conceded when Michael West’s corner was converted by Vieira. A to-and-fro game saw Ricky Shakes put Fleet 2-1 up before Tamworth responded with two goals to leave it at 3-2. But off the bench, the much-underrated Vieira-Ashikodi understudy – Scott Ginty – found the net twice in four minutes in the final quarter-hour to briefly put us above the relegation line on the afternoon. But it wasn’t enough with Fleet condemned to relegation by a single point as rivals Gateshead and Eastbourne picked up the points they needed, the latter’s goal six minutes from time in their game ultimately ruining the afternoon for the defiant Fleet contingent.

24th April 1993
Fleet 3-3 Sittingbourne
A season where so much went right – and so much more went wrong at the crucial time. Summer signing Steve Portway smashed all sorts of records with a 61-goal haul in all competitions, firing threes, fours and double hat-tricks left, right and centre. For so much of the season, it seemed the Fleet and Sittingbourne would be slugging it out for top spot and when Gary Aldous’s side led 1-0 in the title showdown at Central Park in January, Fleet looked like the team with the edge. But in rolled the fog, the match was abandoned and Sittingbourne won the rescheduled match in front of 3,074 a month later. After that, Fleet embarked on an eight-game streak without a win, the promotion dream fell apart, Sittingbourne roared away at the top and we were overhauled by Salisbury and Witney Town into fourth place. Thus by the time of this rematch against the ‘Bourne at Stonebridge Road’s last game of the campaign, there was little but pride to play for as the new champions-elect rolled in to rub the home fans’ noses in it. Another big crowd for the time – 1,867 – clicked through the turnstiles and with the Fleet having found their shooting boots again finally (although too late), they made it 14 goals in four games. An action-packed and occasionally bad-tempered affair saw Tommy Warrilow head the Fleet in front against his former club and in a goal-laden first-half, the visitors equalised and took the lead before Micky Cotter hauled it back to 2-2 and Portway added a third for the Fleet before the break. It was 3-3 early in the second-half before the referee booked six players in four minutes and manager Aldous handed a young Lew Watts his debut from the bench before trading a few barbs with Bourne boss John Ryan in the typically no-holds-barred post-match debrief.

24th April 1948
Fleet 2-0 Folkestone Town
A month after losing to Gillingham in the club’s first ever final (Kent Senior Cup) watched by 11,800, Fleet had the chance for a second final in the lesser of the two competitions, the Kent Senior Shield – and were also on course for the Southern League Cup final should they overcome Colchester United in that semi. Having beaten Sittingbourne 8-2 in the previous round (local boy Roy Butler becoming the first Fleet player to score four goals in a match in the process), the path to the Kent Senior Shield final was blocked by Kent League title contenders Folkestone Town. After a mid-season slump, in-form Fleet had four wins and two draws from their previous six games and found their fellow Kent side to be little trouble as Len Wakeman and hotshot Bert Hawkins fired the home club into the final at Stonebridge Road. Any celebrating was short-lived, however, as Fleet’s end to the season went rapidly downhill. The win over Folkestone was followed by defeat to Colchester in the Southern League Cup semi-final and hot on the heels of that, Fred Lester’s side fell to a then-record defeat of 8-1 at Cheltenham Town in the league. The last match of the season should have seen smiles return to faces as Margate came to town in the Kent Senior Shield final but the Kent League champions failed to read the script and shocked the Fleet with a comprehensive 4-1 victory.

Ed Miller has been Ebbsfleet United's communications manager and programme editor since 2014 and responsible for the club website since 2007. Contact him on ed.miller@eufc.co.uk
PrevPreviousU15s welcome hands-on expertise
NextEnglish football announces social media boycottNext