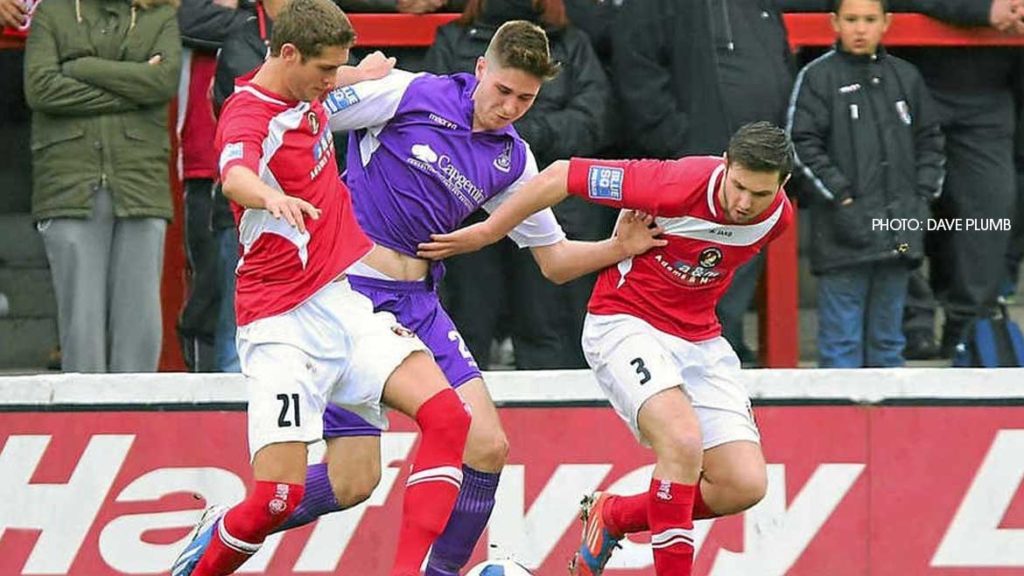 This Easter Monday we were due to play Notts County at Meadow Lane – but it’s a ground we’re seemingly destined never to walk out at! Back in 2000, Fleet were denied a replay there in the FA Cup despite a late rally and went out 2-1. Three years later, we were seconds away from a replay in the same competition only for a goal in injury time to rob us of a first appearance there.

And earlier this season, Gozie Ugwu’s late penalty seemed to have finally secured that elusive replay at Meadow Lane… only for Ben Turner to snatch the winner for the visitors with moments left on the clock once more.

But we still had this season’s league fixture at Notts to look forward to and while denied FA Cup replays there three times, there could surely be no calling off the league game. Well, think again! Once more Fleet fans will have to put off that visit to the Magpies’ ground to another day.

Instead, we delve again into our archives for our Matchday On This Day, April 13th vintage…

13th April 1963
Fleet 2-1 Romford
The club’s record-breaking FA Cup run and replay at Roker Park of two months previously was already fading into folklore as Fleet faced a first-ever relegation. The cold winter coupled with the cup run had left Fleet with a mountain to climb and a huge backlog of games, and this Easter Saturday clash at home to Romford was one of 14 games in a month to the end of the season. Since bowing out to Sunderland in the FA Cup in mid-February, Fleet had picked up only three points in nine games, all but consigning us to relegation. A healthy 1,251 had turned up at Stonebridge Road to see if the tide could be turned and goals from Bobby Doyle and Brian Skingley gave Bill Moss’ men an unlikely win as Fleet sought to overhaul rivals Poole Town, Rugby Town, Wisbech Town and Worcester City. While this win was a good one, it mattered little as the remaining 10 games yielded only three more victories and Fleet were adrift of safety by 10 points come the end of the season. It was the supporters’ first experience of relegation and it would herald a truly miserable decade or so ahead at Stonebridge Road.

13th April 2002
Braintree Town 0-2 Fleet
Nerves were jangling as the race for promotion to the Conference went to the wire. Fleet’s titanic Ryman League title duel with Canvey Island had just three games to go, with nine points up for grabs – and Fleet led the table by just two points, though with an inferior goal difference. This visit to third-placed Braintree had all the hallmarks of a potential slip-up, certainly enough to hand the title initiative to the Iron’s Essex neighbours Canvey if Fleet dropped points. In the event, the stress and tensions of the visiting fans were eased by their side’s professional and accomplished display in front of 665 at Cressing Road. Goals at either end of the second half from Danny Lye and substitute Paul Booth headed off a spirited Braintree display and the vital win meant Fleet could take the title the following week against lowly Boreham Wood at Stonebridge Road. In the event, Wood posted a shock win that almost derailed the title bid but with Canvey dropping points as well, Fleet were able to get the win they needed for the title in the last game at Bedford.

13th April 2013
Fleet 1-3 AFC Telford United
Much was happening off the pitch as these two relegation rivals met at Stonebridge Road. Fleet fans demonstrated outside and inside the stadium against owners MyFC in the first organised public display of discontent. With the club in dire financial straits and struggling to pay off the taxman, a potential new owner in Carlos Karani Kabir was waiting in the wings and due to meet fans a few days later, but nothing came of this potential lifeline. On the pitch, already-relegated Telford picked up on the off-field troubles and took advantage of it, gaining their first win in six months. In the process, they relegated the Fleet – themselves with only one win in 13. Aaron Williams scored a hat-trick and future Maidenhead midfielder Christian Smith was sent off near the end, with the Bucks well worth their win. Demoralised Fleet had actualy started well enough, going ahead on 16 minutes through Stefan Payne, but the must-win game had turned sour as Williams scored three times before the break. The 686 crowd had long passed hoping for any kind of miracle by the time the second-half petered out and instead the very existence of the club was a matter for the highest concern.

Ed Miller has been Ebbsfleet United's communications manager and programme editor since 2014 and responsible for the club website since 2007. Contact him on ed.miller@eufc.co.uk
PrevPreviousFleet Trust help urgent charity minibus replacement
NextNational League thanks Premier for advance paymentNext