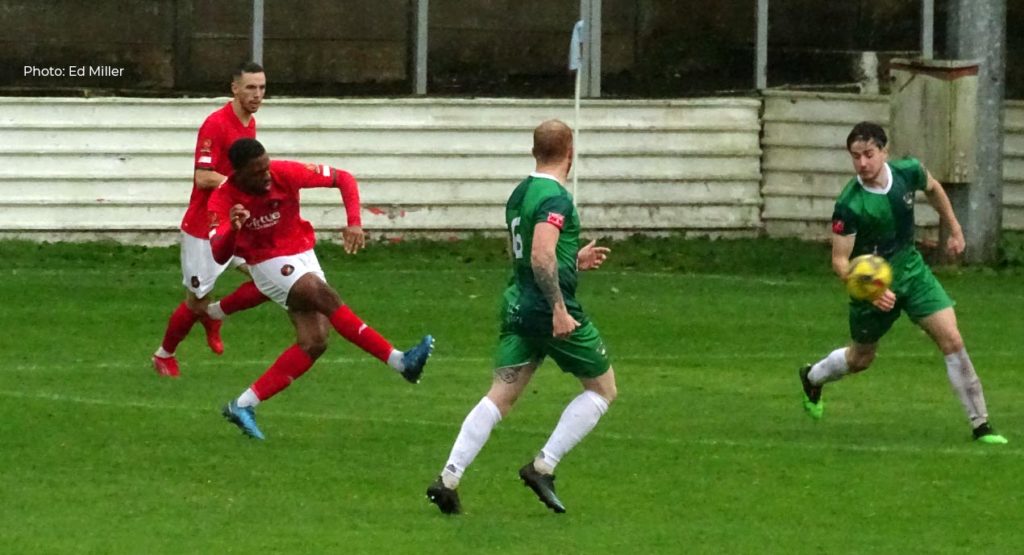 Off the bench, in the hat

Kieran Monlouis became the second substitute to win a cup tie for the Fleet this season, following on from Elliott Romain’s late winner against Carshalton Athletic in the previous round of the Emirates FA Cup.

The Fleet’s supersubs are certainly vindicating their manager’s tactical decisions by finding the back of the net to ease the team’s passage into the next round, with Adam Mekki and Jack Paxman also having come off the bench in league games to score already this season.

It was, of course, an extra special goal for Monlouis whose progress at his new club was checked for medical reasons as the season began but the midfielder announced his return to duty in the best possible way with a run and shot that made the difference against Aylesbury United.

“It’s been a long time coming,” the Saint Lucia international told BBC Radio Kent’s Charles Webster. “I’ve been out for the best part of three months and no pre-season games under my belt so I was delighted to come back and help the lads and the team to get through to the next round.

“Coming on in a game where it feels like nothing’s really going on, it’s always good to make an impact, especially in cup games.”

Back in training, Monlouis revealed he’s already developed a good understanding with Greg Cundle and that helped create the space for his run on goal.

And the midfielder admitted the return to action was a little bit of a shock to his system but he’s raring to go to get more games under his belt in the coming weeks.

“[There was] cobwebs in my lungs!” he said. “But apart from that I felt good on the technical side of things. It’s just good to be back in training and in and around the lads. It’s been a while so I was just happy to be on the pitch and and playing with the boys again.

“When you come to grounds like this you never know really what’s going to happen. We worked in training all week on knowing their weaknesses, where we can exploit them.

“And now I’m just grateful for my chance. Wwhenever the gaffer needs me, I’ll be there and I’ll be ready. Like I said, it’s been a long time so I don’t expect to be coming in straight away but I’ve just done well for myself and that’s all I can do.”

Ed Miller has been Ebbsfleet United's communications manager and programme editor since 2014 and responsible for the club website since 2007. Contact him on ed.miller@eufc.co.uk
PrevPrevious“It’s a terrible feeling not to be in a draw”
NextMaidstone game to be rescheduledNext