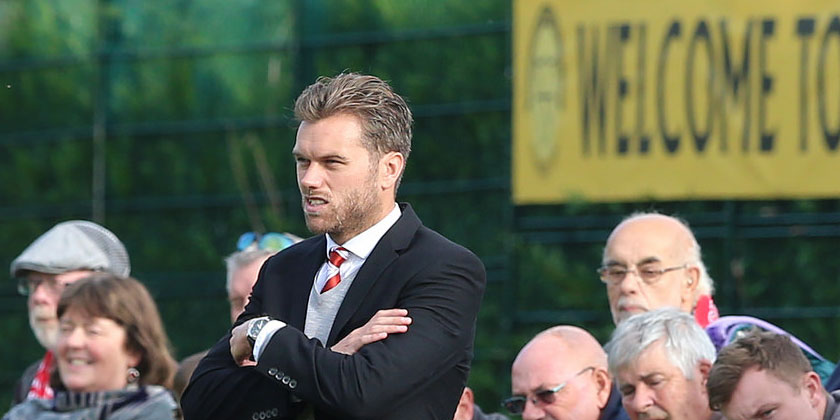 Negotiate banana skin for a big day out, Macca tells his troops

Daryl McMahon laid down the gauntlet to his side ahead of embarking on this season’s Emirates FA Cup as the Fleet look to make Round One for the first time since 2012. The Fleet boss, who has suffered Fourth Qualifying Round defeat both as a player and manager at Stonebridge Road, is determined his side will progress with the potential of a big draw should they do so.

“For everyone now in this round of the competition, you’re one game away from going to The Valley, from going to Fratton Park. Someone’s going to get them draws and everyone’s in there with a chance for this game,” he told BBC Radio Kent’s Charles Webster. “It’s a great tournament and we’re looking forward to Saturday. I don’t think it’s a distraction. It’s probably nice to have a different game. When we were in the South last year, you look at it and hope you get someone from the league above to challenge. You go into a different game, a different environment for a lot of the players and one you’ve got to react to. Any game can be a banana skin which we’ve seen last season.”

The Fleet, of course, slipped on that very banana skin at Merstham last season (McMahon pictured during that game, above) and the manager certainly won’t be taking East Thurrock United lightly.

“East Thurrock are going well in the Conference South,” he said. “We know them pretty well obviously from last season and we know no game’s easy. But we know what the challenge is and it’s the same for East Thurrock as well.”

McMahon has had better luck in the competition as a player so far, reaching Round Four with Leyton Orient in 2006, and his fond memories of the competition are something he wants to recreate as a manager.

“The biggest game we had when I was a player at Leyton Orient was against Fulham,” McMahon recalled. “At the time they were a Premier League team, at Craven Cottage in the Third Round and we beat them 2-1. And we played Charlton who again were a Premier League team at the time at The Valley and we got beat 4-3 or 3-2 in the last minute of the game. They’re the highlights, them two games in particular. I played Leicester with Stevenage as well at the Walkers Stadium after that. So I’ve had a couple of good memories and some good days out.”

Below: Daryl McMahon, fourth from right, celebrates victory in the FA Cup Third Round at Premier League Fulham…

Much will depend on Fleet’s attacking prowess with Darren McQueen ruled out through November and likely much of December, too. New signing Antonio German will be in the squad for Saturday and McMahon is hoping the former QPR youth can fulfil his undoubted promise in a red shirt.

“It’s up to him,” said the Fleet boss. “We’ve given him that opportunity to show what he can do. He’s got all the tools, he’s quick, strong, powerful, direct, good ability. But it’s now for him to bring it all together. He’s trained well for the last two or three weeks, he’s trained well again today, showing that potential again. Players sometimes take a little bit longer to find their feet and hopefully, he’s 25 now, he needs to settle down and make a name for himself and dig in somewhere and hopefully it’s here.”

“But Weston’s in fantastic form, you’ve got Keds, Millsy, still got McLean, Cook, Shields, Coulson, we’ve got plenty of attacking options. It’s more probably the middle of the pitch where we’re a bit light with Drury and Payne out so it is what it is. You get injuries in the season and we won’t use them as excuses. We know we’ve got very good players coming back in the very near future so we’ve got to get through this period and we’ll get stronger as we go along.”

The manager was pleased with his players’ application at Macclesfield last weekend and was equally pleased by the travelling fans’ support. “We played really well and should have got something out of the game and it was a very good performance,” he enthused. “I said in the week, we had a lot of fans there again and they stayed right till the end to clap the players off because they understood that we probably deserved something out of the game and they appreciate the work ethic of the lads. And the lads appreciate the fans coming.”

Other than the lack of points, the only other disappointment for McMahon was not being able to pick the brain of his hero, Sir Alex Ferguson, who was in attendance at Moss Rose. “Obviously I’m a Man United fan,” said McMahon. “He’s a bit of a legend, isn’t he? He’s done alright! It was nice for him to be there, I didn’t see him because obviously we were busy with the match but it was great for him to be there.”

There might be ample opportunity for a Macca-Fergie rendezvous if Fleet were to get a dream draw at Old Trafford but that’s a million miles from the mind of the manager who must out-think East Thurrock this weekend.

The Fleet drew 1-1 with the Rocks at The Rookery last season, a week after our FA Cup exit, prior to a 6-1 demolition of the same side back at Stonebridge Road in March. But the Essex side have surprised a lot of people this season by being amongst the early pacesetters in the National South and they have achieved some formidable results, including wins over Braintree Town, Dartford and Chelmsford City.

Just three points off top spot in the league, East Thurrock have achieved it with a minimum of new players. Indeed they lost one of their standout players of last season, Tom Wraight, to Maidstone United in the summer and brought in only former Dartford and Concord midfield pair James White and Max Cornhill. Another ex-Dart, Lee Burns, should be in the squad for Saturday while the danger man is Sam Higgins, who has scored almost 250 goals in 300 games for the club. He has 11 goals already this season, including two in the previous round against Harlow Town.

The Essex club are urging a big turnout to boost their 340 home average. They have only twice before made the First Round: in 2011, losing to Macclesfield Town, and again in 2014, where they were beaten at Hartlepool.

Should Saturday’s game end in a draw, the replay will be at Stonebridge Road on Tuesday, October 17th, KO 7.45pm. It will be an all-pay match on the gate with no season tickets of any variety valid.

Listen to Daryl McMahon’s full interview with Charles Webster below.

Ed Miller has been Ebbsfleet United's communications manager and programme editor since 2014 and responsible for the club website since 2007. Contact him on ed.miller@eufc.co.uk
PrevPreviousFleet put nine over the line!
NextEast Thurrock United 0-0 FleetNext