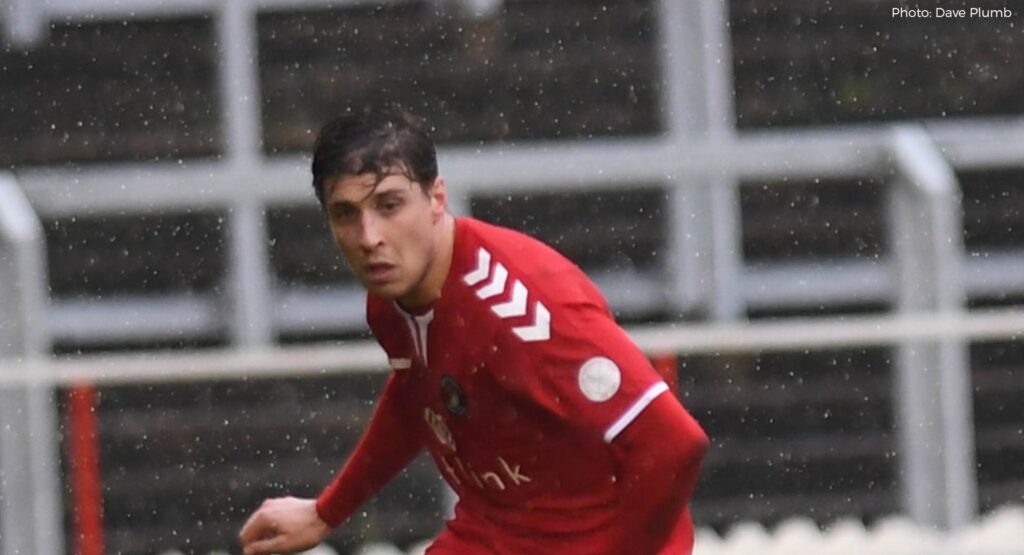 Midfield mates – “We encouraged each other to sign!” says Mekki

Adam Mekki’s return to the Fleet had been simmering even despite the premature ending of his loan period last season and the club’s latest acquisition revealed he and midfield colleague Josh Payne had egged each other on to sign up at the Kuflink Stadium.

“I got close with a couple of the lads driving in with them – Frankie Sutherland, Johnny Goddard, Josh Payne,” Mekki revealed. “I’m not that local so when you’ve got friends with you, the drive’s not bad. Myself and Payney have kept in close contact over the summer and coming back to Ebbsfleet was definitely something we both really wanted to do and we sort of encouraged each other to do the deal! That was a big thing for me as well, knowing a player like Josh Payne is alongside me. Not only for his footballing ability but coming in with him, it makes it all work so much much seamlessly.”

Despite the drop in league status, Mekki’s favoured option was always to come back to the Kuflink Stadium.

“When my loan here finished last season and I was recalled by Bromley, the conversations I had with Ebbsfleet then were if I was to leave there, because my contract was up at the end of the season, that they’d love to potentially sort something out. So the prospect of a move back was definitely there from very early on and I knew it was a really good option for me.

“As a player, obviously you want to be playing at the highest level possible. I had conversations early on with Steve and Damian and there was that uncertainty as to what division we’d be in but the contract was there for me regardless of the league. And the ambitions were the same regardless of the league, the idea of ‘This is the direction we’re going in’ was an important factor.

“So seeing the plans put in place here behind the scenes during lockdown, it was all positive, and the ideas that were shared with me made me think that coming back to Ebbsfleet was definitely a very good option for me. And now looking back on it, now we know the division, nothing’s changed for me. It’s just about having real optimism for this season and I’m delighted that my decision has been to come back.”

The delight is doubtless shared by Fleet fans, with Mekki one of the names on their lips of potential recruits at the end of the last season.

“I enjoyed my time here and the fans were really good,” said the former Tranmere and Bromley man. “They were really positive despite the league position and they remained upbeat. After games, I’d have a conversation with supporters and they were optimistic thinking we’d stay up and get the results. On the pitch the boys had started to turn it around and despite the position it was a really upbeat atmosphere and a good place to be around.”

Mekki’s season in 2019/20 was an odd experience, even allowing for the coronavirus that put an end to it. He came back from a serious injury to find himself chasing promotion with Bromley, to battling relegation with the Fleet and then back again.

“It was a bit of a stop-start season trying to get fit from my injury,” Mekki said. “Pretty much the first time I kicked a ball properly after breaking my leg was coming back in for the first game of the season. I didn’t really have a pre-season so I was playing catch-up. Things change so quickly in football – the loan to Ebbsfleet came about in 24 hours and in my mind, playing regularly and enjoying it, it was to be to the end of the season and I was looking forward to helping turn things round here. But you can’t look too far ahead because the next thing I know, I was back at Bromley.”

Fleet fans saw plenty of good things from Mekki, who had to fill in to cover suspension and injury in a number of positions, but his best game was undoubtedly in a more favoured wide position at Maidenhead.

“Even in that game, I was operating in a wing-back role which is slightly more defensive as I’m more of an attacking player,” he said. “I prefer being out wide either left or right but I enjoyed the centre-mid or the No.10 role that I was in as well last season. Like other players, I’ve had a Zoom call with Dennis Kutrieb about how he wants to play and his philosophy. He’s very astute and thorough is what I’ve got from those calls, very precise, which is good from our point of view as players to understand that the manager knows exactly what he wants. He asked where I felt I was strongest, he said he’d done a lot of research on me, watched the clips and heard good things.

“Looking at the signings we’ve made, a lot of the other lads I either know or know of and they’re really impressive signings so far which bears out what was said to me about the direction the club was intending to go in. Now I can’t wait to get going and see what we’ve got as a squad and how we’ll work together.”

Ed Miller has been Ebbsfleet United's communications manager and programme editor since 2014 and responsible for the club website since 2007. Contact him on ed.miller@eufc.co.uk
PrevPreviousMekki makes Ebbsfleet return journey
NextLife’s a gas for returning PayneNext