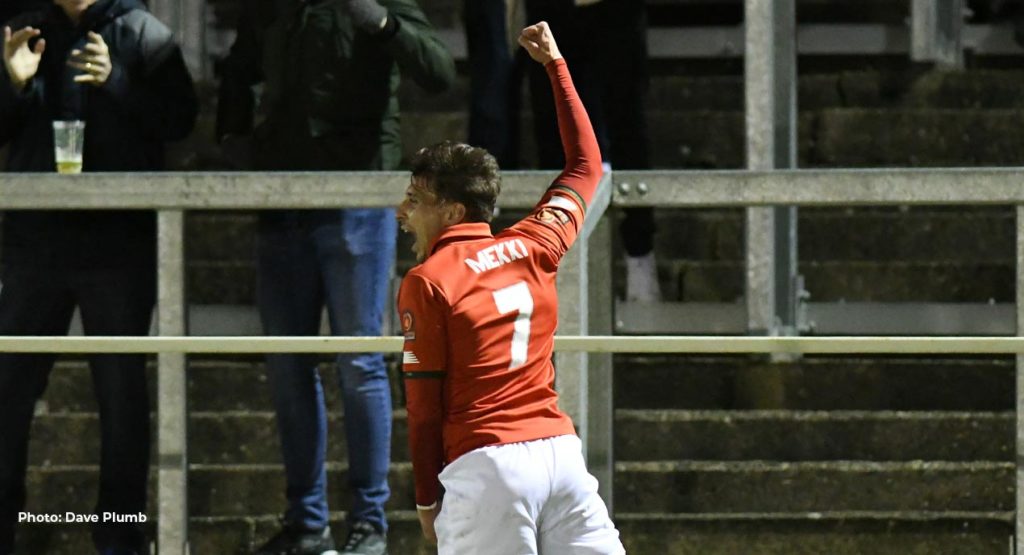 Mekki revels in a fired-up Fleet

Adam Mekki said his side had fire in their bellies going into Tuesday night’s St Albans match following the defeats on the road in previous weeks. The two-goal hero brought his goals stats to five in three starts and six appearances from the bench with a quickfire first-half brace.

“It was a perfect reaction, just what we needed to clear out some cobwebs,” Mekki told BBC Radio Kent’s Charles Webster. “We’ve had a few bad results recently but it was good to bounce back with a solid performance today. We were fired up for it, we’ve had a few bits of criticism, backs against the wall a little bit. It’s a test of character really, to say right, we need to turn things around and get people back on side. Believe in what we’re trying to achieve and today was the perfect reply to that.”

Given his goals to games ratio this season, one would be forgiven for thinking Mekki’s got a long-standing reputation for such deadly finishing, but not so said the Fleet No.7.

“It’s not really something that I’m used to, to shoot on sight and being deadly!” he said. “But I’ll take it and I’m just happy to get a couple of goals today. There’s no better feeling than scoring a goal. It’s always good to score early, especially with the way we play. We don’t stop, so once we get one we’ll go for the second, third, whatever. Maybe the early goal does settle a few nerves – we started the game really well so it was a reward for our hard work and pressing up the field and trying to win the ball back. And [Craig] Tanner with his quality in the final third, it was a great ball across and fortunate that we got the own goal which allowed us to kick on.

“It’s no secret that training here is is rigorous. You work just as hard if you’re not in the team as if you are so everyone is ready to jump in at a moment’s notice and that’s where having a big squad can come in handy.”

Four up at the break, Fleet had to wait for the fifth to round off a fine performance but patience paid off in a tighter second-half as St Albans regrouped.

“There was pressure from the gaffer to make sure we didn’t sit off,” Mekki revealed. “He said whatever you do, don’t take your foot off the pedal and that’s what the message was at half-time. St Albans have got nothing to lose so they will come out and start taking a few more risks and pushing up the pitch and sometimes we had to soak up a little bit of pressure and possession. But it’s a good test for us to learn to deal with being without possession.”

Dennis Kutrieb and his players were prepared for a tighter game than ended up occurring but Mekki echoed his manager in praising St Albans’ strengths.

“They had their cup run and when you slip down the table from having games in hand, the pressure’s always there to try and get results and climb the table. They were always a threat from before the season started they want to be up there and they’ll be contenders maybe for play-offs. So they’re a good team and they’ve had some good results but it was our day and it was a good statement.”

Another player whose day it was, was debutant goalkeeper Louie Moulden who enjoyed a clean sheet in a quiet game for him – and that was probably the perfect introduction said Mekki.

“He had a quiet game and I think that maybe when you make your debut, you probably want that to ease yourself in. It was good for Louie, he’s slid right into the team and he seems like a good guy and he’s working hard. Hopefully we don’t see too much of him because it’d be nice for him to have a few clean sheets… we haven’t really seen him being tested so far but let’s keep it that way!”

Ed Miller has been Ebbsfleet United's communications manager and programme editor since 2014 and responsible for the club website since 2007. Contact him on ed.miller@eufc.co.uk
PrevPreviousThe fine lines of finishing
NextSouthend’s ANG adds energy to Fleet’s flankNext