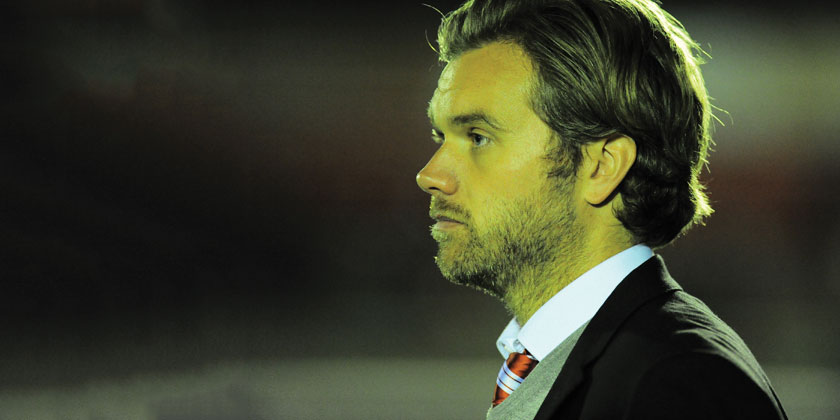 McMahon: we lost the game in those two minutes

Daryl McMahon cut a disappointed figure following his side’s Emirates FA Cup exit and felt, despite Doncaster adding on the goals in the final 10 minutes, that it was the two at the end of the first-half where his team lost their way.

“When we scored the second one, I called one of the players over and said make sure we get a zero at half-time,” the Fleet manager told BBC Radio Kent’s Charles Webster. “That was the critical bit of the game, I felt we lost the game then. Even though we were level at half-time, I thought the disappointment of being two up and then 2-2 changes my team talk, it changes Darren’s team talk. The game’s become difficult then for us.

“We showed for 45 minutes we’ve got players that have the technical quality of players at League One level but what we didn’t have was the professionalism for that last few minutes, seeing that through and it’s a lesson that we have to learn going forward in our league campaign as well.

“We have to be a bit more professional, a bit more ruthless maybe, a little bit more clinical to make sure that in them two minutes you don’t score. Kick the ball 10 times out of the ground if you have to to get to half-time at 2-0.”

With Fleet well on top for a spell after their goals, it was all the more disappointing that seemingly cruising towards a 2-0 half-time scoreline, the lead so swiftly evaporated.

“We’d been so good for the 45 as well, defensively, our shape, breaking out of our shape really well,” McMahon said. “They’re a League One side, we’re a Conference team, evolving hopefully and trying to get into higher levels but we have to learn as well that you have to do your job for 47, 49, 50 minutes, whatever it is.”

Doncaster edged ahead in the tie seven minutes after the break through a rather fortuitous deflected strike by James Coppinger and McMahon felt his goalkeeper was unlucky on several occasions with the goals that went in.

“The deflected goal, that’s what we needed,” McMahon said. “In a cup tie against a team two leagues above you, you need that little bit of luck and we didn’t get it. All the goals we conceded, I think Ashmore has scored three of them just from deflections in and around him. They’re disappointing goals and we didn’t have stuff fall for us in those areas. But credit to Doncaster, they’re a very very good side and they play some good football.”

The boss was also disappointed for the Fleet fans who got right behind their side once again and he only wished they’d seen more of a 90-minute performance. “The crowd were fantastic I thought. I said in my programme notes that they’d come out and give us some noise and up until 45 minutes you couldn’t ask for anything more, we’re playing some good stuff, crowd are loving it, enjoying it, they’re noisy and then what happens happens in the second half which is disappointing. But we have next Saturday against a team at our own level and we need to make sure we perform for 90+ minutes, not 45.”

Fleet will now have to quickly shake off their misfortune as they return to training on Monday but their manager felt the game offered them some areas to improve upon. “It’s highlighted some things that we’ve got to work on. The second half was difficult to watch, especially when Bush went off and we went down to 10 men. But we have to learn, we have to get on with it, it is what is. Monday morning, I expect the lads to come in, maybe not too happy, but getting ready for Leyton Orient next Saturday which is a big game.

“I expect a reaction, Orient are not on a good run. They’ll come here, the stand’s open, it should be a good day for us on the TV. It’s a great day for us, it’s the whole reason you get promoted. Leyton Orient at home, on the telly. We’re enjoying it and we’ve got to make sure we get our heads down now for next Saturday.”

Ed Miller has been Ebbsfleet United's communications manager and programme editor since 2014 and responsible for the club website since 2007. Contact him on ed.miller@eufc.co.uk
PrevPreviousFleet 2-6 Doncaster Rovers
NextMural adds colour to Community HubNext