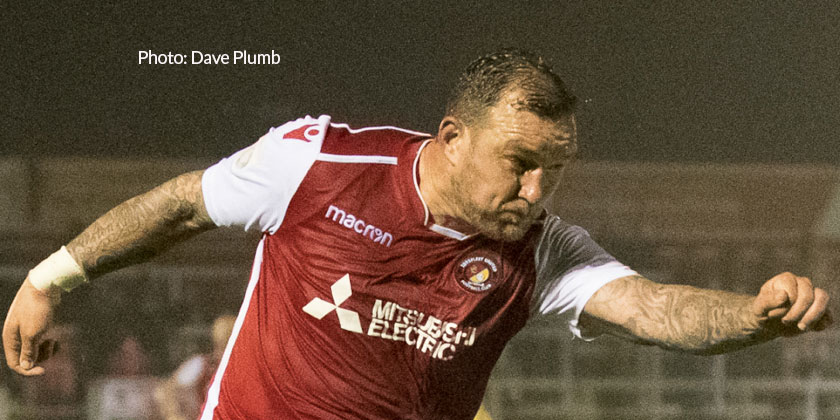 “Maybe I’m getting better as I get older,” says 52-goal hero

Danny Kedwell routinely targets 20 goals a season but that’s always easier said than done for a striker. Having hit that mark, along with his hat-trick and his 50, 51st and 52nd goals for the club, the evergreen frontman claims he might even be improving with age!

“That’s my target, 20 goals a season,” the 34-year-old told BBC Radio Kent’s Charles Webster. “It’s the first time I’ve got 20 in a long time so maybe I’m getting better as I get older!

“I’ve been waiting for that 50th goal, I didn’t know if I’d got it or not before or after the game. It’s a great achievement to score my 50th here and I’ve just got to keep it going and hopefully those goals go into the next game. And you never know after that.”

Fleet were twice pegged back as Kedwell seemed to be engaging in a personal duel with Gateshead’s very own Danny, Johnson having also bagged his 51st and 52nd goals for the home side during the match.

“The gaffer was right at half-time – we still had another two, three gears to go,” said Kedwell. “When it went 2-2, we stepped it up and showed our quality. It’s not all about me, it’s about the team and if it weren’t for them I wouldn’t have got my hat-trick. It shows our team spirit and the great quality we’ve got in the staff, behind the scenes and with the boys out there. We dig in together and after the [Sutton] disappointment it just shows when we come back and perform like that.”

With a win at Torquay guaranteeing the Fleet fourth place, Kedwell’s not letting the situation go to his head and thinks the Fleet’s experience will continue to stand them in good stead whatever happens for the rest of a memorable 2017/18 season.

“We’ve had a lot of travelling but we’ve got a lot of experience in the team,”  Kedwell said. “We’ve done it for years, so we’re used to it and it ain’t going to affect us. We’ve just got to keep doing what we’ve been doing and believe in ourselves. Today our attacking display was a different class and if we keep playing like that I don’t think a lot of teams will be able to cope with that.

“We’ve got great confidence. If you don’t come out with confidence after this… coming away here and 5-2 today. Don’t forget, they ain’t lost at home since 10th February so they’ve had a good run at home and we’ve just gone out there and showed them our quality tonight and how good we are.”

At that point, the interview went rapidly downhill with the arrival of Andy Drury who claimed two assists during the match, but it’s probably worth listening to that (below) for comedy value alone!

Ed Miller has been Ebbsfleet United's communications manager and programme editor since 2014 and responsible for the club website since 2007. Contact him on ed.miller@eufc.co.uk
PrevPreviousGateshead 2-5 Fleet
NextMcMahon: “A performance was all I wanted”Next