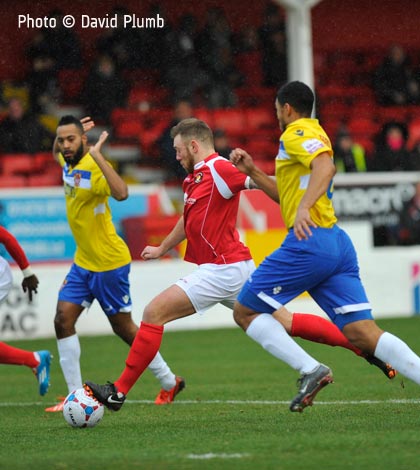 Six weeks ago, following Fleet’s relatively straightforward 3-0 demolition of Staines Town, the luckless Swans’ play-off challenge looked to have been sunk – much like their Wheatsheaf Park pitch at the time.

But Marcus Gayle’s side have come roaring back into contention and Fleet’s visit west is by no means as easy as it might have looked on paper a few matches ago.

Fleet boss Steve Brown is wary of the threat posed by an in-form Staines side but told FleetOnline he wasn’t going to over-emphasise the opposition’s new-found winning streak. “It’s the start another run of tough away games this Saturday,” said Brown. “Staines happen to be in a rich vein of form at the moment and although we are very respectful of their home record, we also know that they will be acutely aware that we’ve only lost two in 14 ourselves and are going there coming off the back of two wins and two clean sheets.”

The manager reports a fully fit squad with the exception of the two long-term casualties in Yado Mamo and Michael West. Brown has ruled out Mambo’s further participation this season as “in all probability, though not in all certainty” following the defender injuring his knee once more. West’s rehabilitation is estimated at nine months, with Brown telling FleetOnline “Michael underwent his surgery on Wednesday and the news from the surgeon is that he anticipates a nine-month rehabilitation programme which is less than we originally thought. We will obviously use all our contacts within the game to make sure Westy gets the best rehab that is available to us.”

Brown could in theory field exactly the same side as he did in the home tie against Staines given the likelihood of Anthony Acheampong and Osei Sankofa pairing up in the centre of defence again, though Michael Corcoran’s recent run in the team could see him get the nod ahead of Alex Osborn still. Anthony Cook celebrated that first Staines fixture by providing a hat-trick of assists so he is likely to be well-marshalled by the home side while Billy Bricknell will be aiming to keep himself firmly in the top three of the league scoring charts as Fleet seek to protect a record that has seen them score in every Saturday Skrill South fixture this year.

Following Havant’s recent surrender of five points from a possible six in their last two games, Fleet’s play-off destiny is now in their own hands with a 10-point cushion to sixth place, a gap that cannot be breached should Brown’s men maintain their recent form.

Staines Town are top of the form table, a blistering five wins from six games having seen their play-off challenge rekindled in superb style. That run has included two wins over Havant & Waterlooville, victories over Bromley and Weston-super-Mare and a draw against Eastleigh – a set of scorelines that show Staines are capable of living with the best in this division. A poor away record through 2013-14 has damaged their promotion credentials, but the Swans have lost only two of 16 games at home and are as miserly as the Fleet in terms of goals conceded on their own patch – just 14 all season.

The Staines side hasn’t changed much since their visit to Stonebridge Road, though Calum Willock has recently been relegated to the bench with his place going to Portuguese striker Jerson Dos Santos, who previously played for boss Marcus Gayle at AFC Wimbledon and has recently spent time in Iceland.

The danger man is 14-goal hotshot Louie Theophanous who, though relatively quiet at Stonebridge Road, is only a goal behind Bricknell in the Skrill South scoring charts. Elsewhere, teenaged Bashram Pashaj in midfield – and also an impact player from the bench – is in decent form and has nine assists and four goals to his name this season while another midfield man, Stephane Ngamvoulou, and defender Chris M’Boungou provide the muscle.

Gayle is looking to gain revenge against the Fleet this weekend following his side’s poor show in February. “We let ourselves down when we played them away and we made mistakes,” he said. “We feel we owe them a performance and we want the real Staines to turn up.”

Ed Miller has been Ebbsfleet United's communications manager and programme editor since 2014 and responsible for the club website since 2007. Contact him on ed.miller@eufc.co.uk
PrevPreviousFleet management team commit to long term
NextFree-thinking Fleet throw open the doorsNext