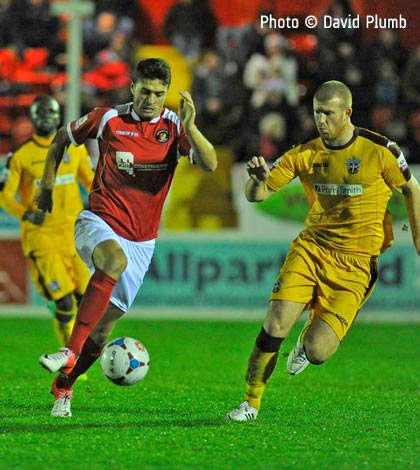 It is being billed as a possible dress rehearsal for the play-offs but both managers are keen to get Saturday over, with points on the board, to consolidate their position in the top five and avoid an anxious final few weeks of the season.

And as Fleet fans know only too well, dress rehearsals rarely mean much when it comes to play-offs. Almost exactly three years ago, Ebbsfleet United faced Chelmsford City at home with both sides virtually assured of a play-off place. Fleet were outmanouevred, lost 3-1, and gave many fans some doubt about their play-off credentials. Less than two weeks later Fleet cruised to a 4-1 win at Chelmsford and followed it up with a 2-1 victory to breeze through a play-off semi-final on their way to promotion glory.

And so nobody on the Fleet management is suggesting this weekend’s clash against Sutton United is in any way the same scenario, but the similarities are nevertheless there for everyone to see. Sutton are embedded firmly in the top two, with the Fleet just behind them, and a few more points for both sides should guarantee a play-off – possibly against each other – come the end of April.

Fleet boss Steve Brown is under no illusions as to the stern test presented by an upbeat Sutton side, seeking promotion to the Conference Premier for the first time since 1999. But Brown is building from the back for this one, knowing his Fleet side are returning to their best in defence. “It’s another tough game away from home and the mentality of the group will be to go and try to win the game,” Brown told FleetOnline. “We have looked very strong as a team regarding our defensive mentality and we will have to be organised and disciplined this Saturday to achieve a result.

“We go into the game only conceding one goal in our last three games and that was a rather unkind own goal in the 92nd minute. I’m expecting a tight game played at a high tempo and both teams will be looking to gain the upper hand to strengthen their play-off position. I know the players are really looking forward to the game this weekend as are the staff. We’ve had a very productive week on the training pitch and can’t wait for Saturday afternoon.”

There was good news for Brown on the injury front as he revealed Yado Mambo could play a part in the run-in after all. “Yado’s injury is settling down nicely and hopefully we will see him involved in some capacity before the end of the season,” Brown told FleetOnline.

The Fleet boss also revealed that Michael West’s outlook is very positive following his surgery. “Westy is now back at home after his surgery and although he’s still in a little discomfort he’s in very good spirits and very determined to come back as strong and as fit as he was before,” Brown said.

Sutton’s season has been one of consistency, with the Surrey club pacing themselves perfectly for the play-off run-in and accelerating beyond their competitors in the home straight. Indeed such has their form been in the final months of the season that even a shot at the title emerged before Eastleigh more or less wrapped things up in their last two games. Sutton still have a mathematical chance of automatic promotion, but anything less than a win against the Fleet will hand the Skrill South title to Eastleigh.

The U’s could count themselves unfortunate to return empty-handed from Stonebridge Road just before Christmas when Billy Bricknell’s brace gave Fleet a 2-0 win that didn’t do justice to Sutton’s overall play and their own goal chances. Since then Paul Doswell’s squad have lost only two matches – one of those last weekend at Maidenhead – and a 13-point gap between them and sixth place should more or less guarantee them a play-off spot.

The U’s expect their second or third biggest gate of the season on Saturday – the 2,172 they got against Basingstoke coming courtesy of a free-admission promotion, the same thing the Fleet are doing against Dorchester for the final home game of the season.

The Sutton squad is peppered with the types of players needed to excel at this level – midfielder Dale Binns is a former Farnborough colleague of Daryl McMahon and Osei Sankofa when they faced the Fleet in the 2011 play-off final. Striker Gavin McCallum counts Woking, Lincoln and Hereford among his former employers, while there is firepower aplenty in Jamie Taylor and Jamie Slabber who have scored 24 between them this season. Slabber has been out with a groin injury but should he fail a fitness test, there is also Craig Dundas, in his third season with Sutton, who has scored 12.

Sutton also include Dammy Shitta who played for the Fleet at the tail-end of last season and, of course, assistant manager Steve McKimm who won promotion from the Ryman League during his time at Stonebridge Road. Chris Sessegnon, meanwhile, returns to his former club having progressed from the U’s youth ranks.

[colored_box color=”red”]The match will kick-off late at 3.07pm as a tribute to the victims of the Hillsborough tragedy and to mark its 25th anniversary this weekend.[/colored_box]

Ed Miller has been Ebbsfleet United's communications manager and programme editor since 2014 and responsible for the club website since 2007. Contact him on ed.miller@eufc.co.uk
PrevPreviousStaines Town 1 Fleet 1
NextSutton United 3 Fleet 1Next