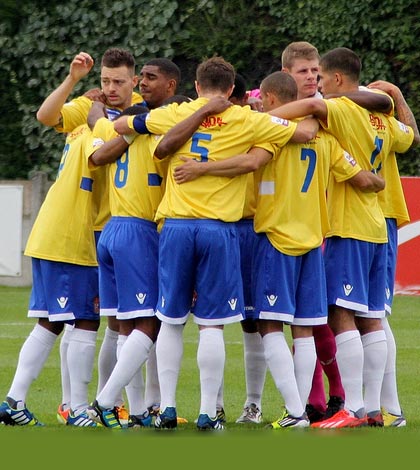 After a week of battling against the elements, both Ebbsfleet United and their opponents Staines Town could be forgiven if they’d forgotten all about the football.

Fleet’s floodlight woes have already been well-documented, with emergency repairs in midweek having put back up what blew down in last weekend’s storm. But even that pales into insignificance given the problems for Staines at their Wheatsheaf Park ground, with manager Marcus Gayle tweeting this picture of their pitch submerged by floodwater.

The Staines pitch has already flooded once towards the end of January and the latest calamity unsurprisingly saw their home game against Tonbridge called off last weekend. Fortunately, the Stonebridge Road pitch isn’t so affected – though with further bad weather on the way, groundsmen Craig Freeman and Peter Norton will once again be putting in the man-hours.

With captain Paul Lorraine back in contention for a starting place, the home side’s main selection headache is over who replaces the suspended Chris Sessegnon, with the straight swap of Joe Howe the most likely option. But with Lorraine back, and with Anthony Acheampong, Osei Sankofa and Yado Mambo all potentially fighting for two spots, Steve Brown has plenty of options in defence all of a sudden.

Fleet will be mindful of the chasing pack, with Dover having won in midweek and Bath creeping up, and the pressure is on as the season heads into its final phase.

Staines are one of those sides in the chasing pack, nine points behind the Fleet but only five off the last play-off place. And while they have serious logistical problems at home, then a trip on the road doesn’t exactly suit them either – Gayle’s side have won just once away from home this season and that only came at the 11th time of asking, four weeks ago at Farnborough.

But their form on their travels has picked up, with a draw at Bath and a narrow defeat at Bishop’s Stortford meaning Fleet will take nothing for granted. Indeed former Wimbledon, Watford and Brentford striker Gayle said his side would be coming to Stonebridge Road to “get a result. Ebbsfleet are a good side and I only want to play open, attacking football. The boys are frustrated they haven’t been playing games and will go there and get at them. We won’t be going there to park the bus.”

The Staines boss has also roped in the services of a mind coach according to his local paper as he focuses his players on a high finish to beat the best-ever eighth place the Swans achieved in their debut Conference South season of 2009-10.

Squad-wise, it will be a return to Stonebridge Road for former Fleet hotshot Calum Willock whose goals fired the club to their previous promotion from Conference South. Something of a journeyman since he left Ebbsfleet for Dover, Willock has played briefly for Boreham Wood and Harrow Borough. Since joining the Swans in January, he has played five games, scoring once in the win at Farnborough.

Fleet will also have to be on their guard against Louie Theophanous who has been in the top five of the scoring charts all season. The former AFC Wimbledon and Bromley man has netted 13 times, having scored 17 last season and, like the Fleet’s Ben Greenhalgh before him, his claim to fame is his second job as a Cristiano Ronaldo body double for Nike ads.

Theophanous is definitely the man to shackle as goals from the rest of the Staines squad are somewhat thin on the ground, with only Louis-Rae Beadle (four) and Bharam Pashaj (three) scoring more than a handful. But with goals and hold-up play key to Willock’s game, the Staines strikeforce will definitely be a tough proposition for whoever gets the nod in Fleet’s defence.

Ed Miller has been Ebbsfleet United's communications manager and programme editor since 2014 and responsible for the club website since 2007. Contact him on ed.miller@eufc.co.uk
PrevPreviousFleet make Academy appointments
NextCar parking info for KSC gameNext