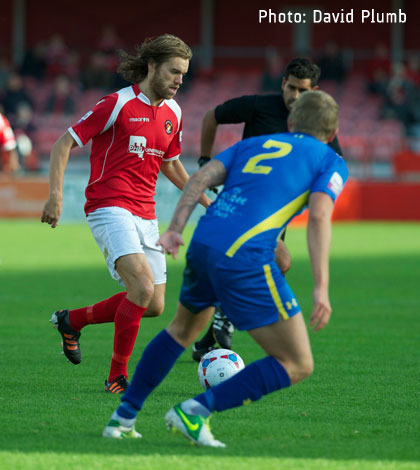 Match preview: all to play for as play-offs loom

Ebbsfleet United travel to the Aspect Arena tonight for the second week running knowing that a win will take them into a play-off semi-final against Bromley – barring a set of remarkable results on Saturday to turn around Havant’s inferior goal difference.

Since the abandonment of the original fixture just a week ago, the match has taken on a wholly different aspect with Concord’s own play-off hopes having derailed following defeats to Dover and Sutton. That won’t take the edge off a game that has generated plenty of media column inches and online discourse as a result of the floodlight failure and Fleet’s subsequent FA appeal. Goals from Ben May and a wonderful strike from Daryl McMahon were, of course, expunged from the records, though Michael Corcoran’s red card stands.

Manager Steve Brown has insisted there is no point to prove, no bad blood between him and his opposite number Danny Cowley and that he is wholly focused on getting what he needs for his side to extend their season. Cowley, who has done a remarkable job in Concord’s first season in Skrill South, will nevertheless be keen to improve their league standing (Concord could still theoretically finish sixth) and show the mettle of his squad as they play again 24 hours after winning at Basingstoke.

Nevertheless, there is certain to be more of a desire to win from both sides given the Twitter storm between supporters and, while Fleet fans are keen to cheer their team into the play-offs, Concord supporters are unlikely to see this game as merely a gentle run-in to their close season.

Brown will decide whether to stick with Corcoran following his sending-off at Concord last week, with the midfielder’s suspension not due to kick in until April 29. And Billy Bricknell will be champing at the bit for a starting place – the top scorer has recently slid from second in the Skrill South scoring charts to sixth, but with two games left could still move back into second or third place with a run of goals against Concord and Dorchester.

Havant’s reverse at home to Maidenhead last night – conquerors of the Fleet last weekend – means Brown’s side are in pole position for fourth place and even a defeat at Concord would still give the squad another bite at the cherry at home to bottom club Dorchester on Saturday. Havant travel to relegated Tonbridge and Dover must beat Hayes – who themselves are in a three-way fight to avoid the drop – to stand any chance of finishing in the top five.

Their punishing run-in will have seen them play eight games in just over two weeks (if you count the abandoned match) by season’s end and they will feel hard done by themselves, having lost to a hotly disputed penalty at Havant, led against Dover until a late flurry and then largely dominated against Sutton until a late goal was conceded.

According to chairman Ant Smith, players who were due to be rested after winning at Basingstoke are adamant they want to be involved against the Fleet. With squad members not returning home until after 1.30am after a delayed match in Hampshire, they will need to work today and play again this evening.

With that in mind, Cowley made six changes to his starting line-up last night, including his brother Nicky, as he juggles a hectic schedule with a small squad as best he can. Lewis Taafe, who impressed against the Fleet, came off the bench to score the winner, so he could feature in the starting line-up, while a few familiar faces – Danny Glozier (ex-Fleet) and the former Dartford pairing of Matt Fry and Paul Goodacre – could also be involved.

Top scorer for the Beachboys is Tony Stokes with 10, but Steve Cawley, Gary Ogilvie and Sam Collins all pose a goal threat as well.

A reminder also that admission to the Aspect Arena for tonight’s match is free.

Ed Miller has been Ebbsfleet United's communications manager and programme editor since 2014 and responsible for the club website since 2007. Contact him on ed.miller@eufc.co.uk
PrevPreviousConcord-Fleet to replay game on Thursday
NextKSC Final tickets and travel on saleNext