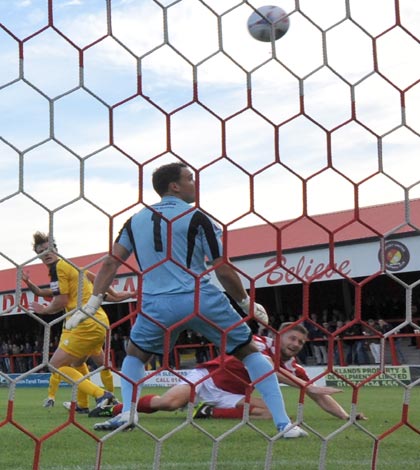 Had Fleet held on to their 2-0 lead in Tuesday’s abandoned game, there would surely have been light at the end of the tunnel for Steve Brown as far as his side’s play-off ambitions were concerned. But with light being precisely the problem at Concord Rangers in midweek, attention now turns to Good Friday’s clash against Eastbourne Borough and the phrase ‘must-win’ is on everyone’s lips again.

Three points on Friday would surely put the Fleet firmly back into the driving seat in their penultimate home game of the season, especially if any of Dover, Havant, Concord or even Bath fail to pick up maximum points. The permutations are many at this stage of the season with three or four games left for most clubs. Concord have to play Dover, Sutton, Bath and ourselves so inevitably clubs in the play-off zone will drop points against each other. While it is no foregone conclusion, Fleet should have enough in the tank to nail down their advantage this Easter weekend.

And whisper it quietly lest we tempt fate, but Fleet’s record against Eastbourne is a good one – 10 games, seven wins and three draws, including a 2-0 win earlier this season in the FA Cup when Ben May netted a brace. The striker had another goal chalked off against Concord and since his reintroduction and goal at Staines has looked to be hitting some form.

The squad will need little motivation after feeling hard done by following Tuesday’s abandonment. Although Michael Corcoran’s red card will stand, he is available for Saturday as his suspension does not come into effect until April 29, ruling him out of all three play-off games should Fleet go that far.

Stacy Long is waiting in the wings, having returned from Eastbourne on loan after 16 games there, and he could make an appearance from the bench against his former teammates – as he did back in October, playing most of the second half in the FA Cup clash.

Having quietly held onto the coattails of the play-off hopefuls all season, Eastbourne’s own ambitions have derailed in recent weeks, with the final nail in their coffin being Havant’s draw on Wednesday night which made it mathematically impossible for the Sports to finish in the top five.

Having won only one of their last eight games, and lost the last four in succession, Eastbourne’s season has culminated in something of a damp squib – but what better way to finish it on an upward curve than taking points from a play-off hopeful and finally end their 10-game wait for a win against the Fleet?

Defender Adam Watts (calf) and influential midfielder Chris Shephard are doubts for Friday and with Long’s return to the Fleet, it’s another midfield berth that boss Tommy Widdrington must fill. He has promising youngster Elliot Levy to call on, but he has been used almost entirely as an impact sub this season rather than a starter, so James Stinson may get the nod.

Since last we met, Eastbourne have drafted in Gillingham striker Tom Derry who has already scored at Stonebridge Road once this season, for Chelmsford in their 2-0 victory in September. Eight-goal Simon Johnson remains a threat, though his form has tailed off somewhat since he featured in the goalscoring charts during the first half of the season and he has found the net just once since mid-November. Instead, much of the onus on goalscoring has fallen on former Woking striker Elvis Hammond, and he has seven to his name since joining from Farnborough in late January.

If Fleet are to cement their top-five place, they will need to get past former defender Ian Simpemba, who hit the bar in our 1-1 draw at Eastbourne way back in August. If Watts doesn’t return to partner him, he will likely be joined by Ollie Rowe, who played briefly alongside Anthony Cook and Billy Bricknell at Chelmsford.

Ed Miller has been Ebbsfleet United's communications manager and programme editor since 2014 and responsible for the club website since 2007. Contact him on ed.miller@eufc.co.uk
PrevPreviousFive-star Fleet
NextConcord Rangers v EUFCNext