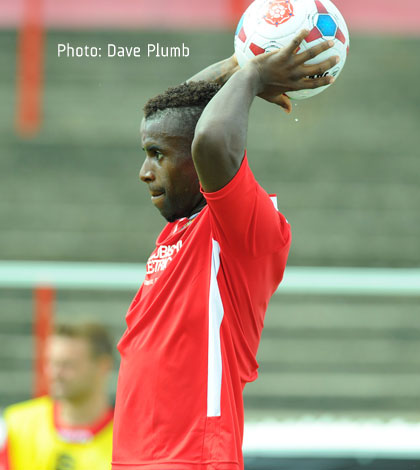 Like arriving a day late for a wedding, Fleet finally get going after all the other guests have made the most of it and the excitement’s been and gone. Not that Fleet fans will feel any less optimistic nor the players any less keen to take out their frustrations of a blank Saturday by returning to the PHB Stadium to kick-off 2014-15.

The match that wasn’t to be at Salisbury has, however, allowed Steve Brown and Steve Gritt the opportunity to view games involving our next few opponents, with the Fleet management team between them taking in three or four matches before their own side has even played one.

Some of the manager’s selection headaches ahead of the Concord clash will have been decided by injuries, with Ben May and Billy Bricknell sitting things out. May is some four weeks away from full fitness while Bricknell’s lay-off is shorter and he should soon be in contention. Dean Rance is on the verge of full training after missing pre-season but he will miss Tuesday as well, while Brown was sweating on the fitness of two other unnamed members of his squad but reports they should come through in time this week.

One player has already departed on loan, with Leo Mazzone heading off to Sittingbourne to experience senior men’s football at that level and Brown has his eye on clubs at which to place two other squad members – given the size of this season’s squad, the Fleet boss is keen to keep all his players in peak shape and believes regular competitive football via loan deals is the way to go.

There is little question of who will start up front given the injury list and in defence, Brown so far seems to have favoured Kenny Clark and Anthony Acheampong, with Shane Huke also pressing his claims. Joe Howe and Chris Sessegnon have shared a fair bit of pre-season time at right back, while midfield is anyone’s guess with as many as seven fit midfielders chasing four spots.

A start that included much-fancied Havant and Whitehawk for the Fleet did not reckon on Concord being top of the table as well! The Beachboys eased past Bath City 3-0 on Saturday and clearly don’t intend to let last season’s drive towards the play-offs be a flash in the pan.

Manager Danny Cowley has kept the spine of his side together for a long time, with six players over the 100-appearance mark. The Concord boss has kept his summer tinkering to a minimum, adding Alex Woodyard from Dartford and Jordan Chiedozie from Bournemouth, while keeping the services of highly-rated midfielder James White and striker Lewis Taaffe. Chiedozie had a bright debut and scored Concord’s third goal on Saturday from the penalty spot.

Added to the defeat of Bath on Saturday, Concord’s pre-season has been encouraging with a 2-0 defeat at home to Dagenham the only defeat in their summer preparations.

Cowley believes his side can be a force to be reckoned with again and prior to the season starting called on his men to eliminate the set-piece errors that saw his side concede too many goals last season. The clean sheet against Bath would seem to suggest they’re learning their lesson.

Last season, Concord’s visit to Stonebridge Road ended in an uncharacteristic 4-0 defeat (May, Thalassitis,Pugh, Palmer), but they were much more dangerous in the narrow 2-1 win at the Aspect Arena in April that clinched Fleet’s play-off spot. In between that was the abandoned fixture that Fleet led 2-0 before the game was called off.

Ed Miller has been Ebbsfleet United's communications manager and programme editor since 2014 and responsible for the club website since 2007. Contact him on ed.miller@eufc.co.uk
PrevPreviousFleet launch new matchday programme
NextJordan joins Lewes on loanNext