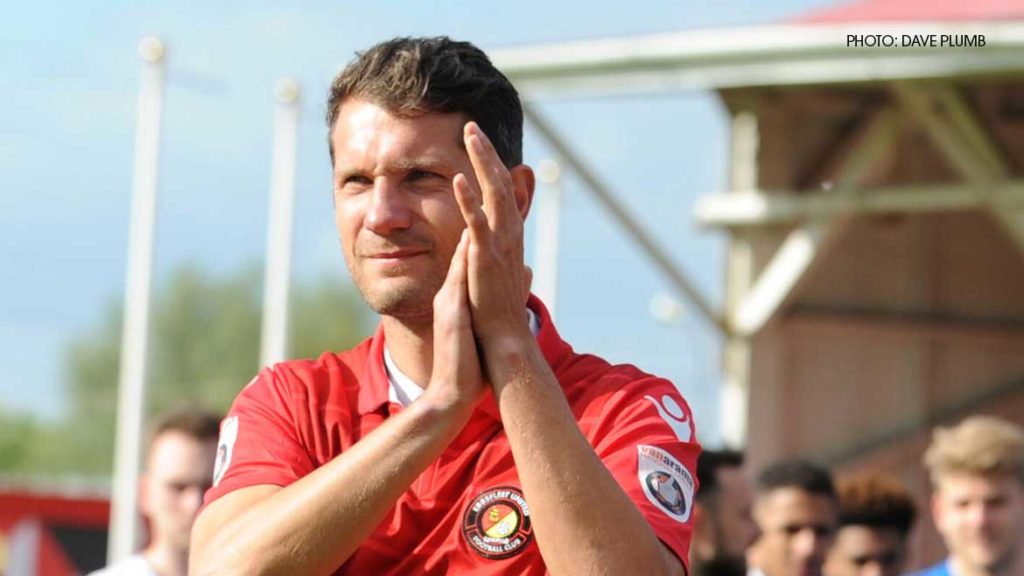 Mark my words and do the right thing

As the coronavirus crisis continues to grip the world, one ex-Fleet player has experienced the stark realities of COVID-19 rather more closely than most of us in lockdown.

Defender Mark Phillips is one of a few former Fleet faces to have been through the illness, alongside former CEO John Moules and ex-striker Nathan Elder. Like them, Mark is on the road to recovery but he has advised fans than nobody is immune to the disease and that ignoring the official advice to stay indoors has serious repercussions.

The 38-year-old signed for the Fleet from Braintree Town in the summer of 2016, having enjoyed a long Football League career with the likes of Millwall, Brentford and Southend United. He won promotion with the Fleet in 2016/17, sharing defensive duties with Dave Winfield and Kenny Clark.

“I’ve had a lot of love from my teammates who have sent me messages,” Mark told us this morning. “I’ve had a lot of social media stuff come through and was on talkSPORT yesterday. All my previous clubs have been in contact and run stories to get the message out to their fans that this could happen anyone if it can happen to ex-players who are pretty fit.

“I’ve always been one of the fitter ones in the squads I’ve been in, in terms of cardiovascular capacity and being able to run. So it’s pretty worrying when you’re struggling to breathe with this condition. I just want to spread the word and get people listening a bit more.”

Mark experienced the symptoms typically associated with the virus and it caught up on him pretty quickly.

“On the Friday I started to develop a headache, then I had a sore throat and cough and I had no sense of smell or taste two days later and within another two days I was struggling to breathe and had to go to hospital,” he said.

“I called 111 to get more advice. I knew I wasn’t critical initially so I didn’t want to take an ambulance up with it being testing times for them and a lot of people suffering. I was hoping their advice would be something mild like take some hot water to aid breathing or something like that but I got through quicker than I thought I would do.

“I was lucky in that I had a doctor over the road and they helped out with an inhaler which took the pressure off my chest. The paramedic said I needed to get to A&E straight away and then I was there for about six hours so it wasn’t that long. The disease binds on to your lungs, but my oxygen and saturation levels were good enough not to need further invasive action. The staff there in the hospitals and those responding to calls, etc, they do an amazing job and we all have to help them out.”

And Mark warns against complacency just because people are healthy, young or showing no symptoms in lockdown.

“The other worrying thing is I have no idea how I got it,” he said. “I run a football academy and we shut down straight away due to FA advice and then the government lockdown. So I hadn’t been around anyone anyway and I’d been social distancing. I’d barely gone out of the house other than to get essentials. I was using alcohol wipes 24/7 so I don’t actually know how I got it. There’s people I know who have since gone down with it but I wasn’t anywhere near them so maybe it was something I touched and that’s what’s so scary and people need to realise that it could be transferred so many ways.

“My mum’s older so I’ve had to stay away from her, I’ve been isolated in a room for a week but I’ve still got symptoms so I can’t go out and it’s seven days from your last symptoms so it’s not even seven days from when you get it. And I wouldn’t even think about going out now because I’m still struggling and it can take longer to recover than you think.

“It’s frustrating for everyone. I can’t see my kids but it’s insignificant if you think that if all of us do the right things, we can soon all go out and have as much fun and sun if we follow the procedures and then we can get on and live our lives, but not just yet. Sometimes we take life for granted and when I was sitting there struggling to breathe, that’s a pretty worrying scenario. I’d love to go for a run right now, I’d love to do this or that, but none of us can for obvious reasons.

“I’ve seen a lot of stuff with people ignoring advice, thinking it won’t happen to them or treating it like a political thing or whatever. But the bottom line is it is affecting people seriously, people are dying so all the official advice we’re hearing, it is relevant because we need to do our bit to protect ourselves and our families and others around us.”

Like most of us, it’s not just Mark’s health that has been affected by the lockdown. After leaving the Fleet in 2017, he went on to play for Greenwich Borough and Kingstonian before coaching and opening a football academy (6occerAcademy), and that business is one of hundreds of thousands sidelined in the current conditions.

“There’s the financial side, I’m a director of the company so I don’t get any help with the self-employed side of it,” he said. “It is affecting all of us and obviously I can’t do any football coaching for the foreseeable future which means I won’t be bringing any money in but I’m trying to take the positives that the government will step in and help.

“Health is paramount and it’s important I’m safe for so many more reasons, to look after my kids and family.

“So stay positive, it’s not going be forever and if we do the right thing it will be sooner rather than later. If we ignore the advice like some of the people we’ve all seen online, if you keep on going about your business as normal, that’s just mad and isn’t going to help anyone.”

• Many thanks to Mark for his time in this interview and all of us at EUFC wish him a full recovery.

Ed Miller has been Ebbsfleet United's communications manager and programme editor since 2014 and responsible for the club website since 2007. Contact him on ed.miller@eufc.co.uk
PrevPreviousOn This Day: April 4th
NextFleet to join in the 5k for £5 challengeNext