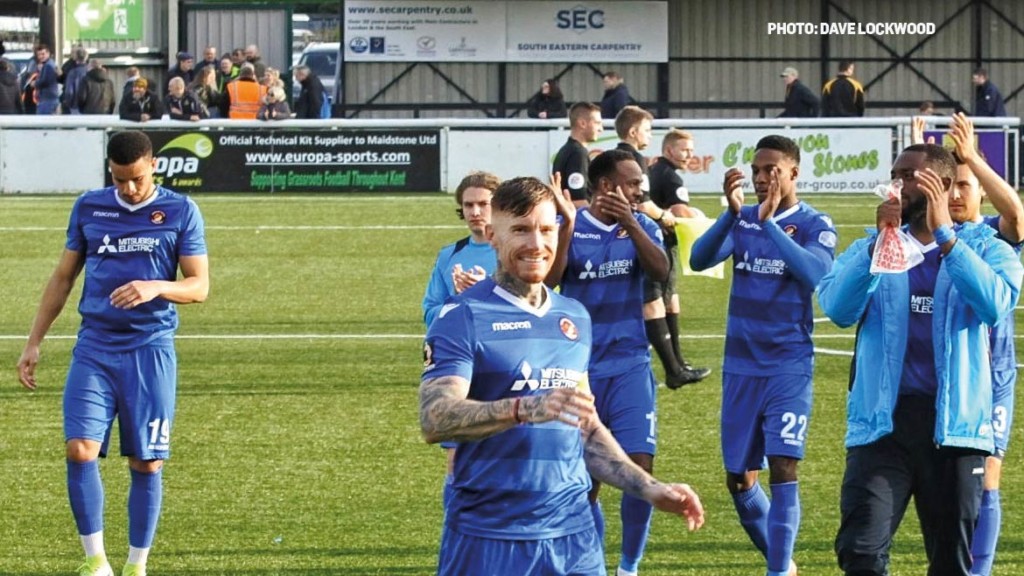 Garry Hill’s first Kent derby resulted in Fleet’s fourth successive win at the Gallagher Stadium and saw his side ascend to ninth place, three points off the play-offs.

Gozie Ugwu’s first-half goal, ever so well crafted, and Michael Cheek’s last-minute header sent the impressive away following back to north Kent jubilant.

Fleet made two changes with Corey Whitely returning alongside Myles Weston, whose presence for Antigua & Barbuda this international weekend had not been required. They replaced Ebou Adams, who had been on call for his country with Gambia facing Algeria, and Bagasan Graham whose injury last week meant he had to settle for a place on the bench.

Maidstone, by contrast, made six changes to reflect a season of flux as far as personnel were concerned, but Jack Powell – whose two goals for the Fleet won the game for the visitors on the last trip to the Gallagher – did line up against his old club for the first time.

An excellent away following that crammed into their allocation in the Genco Stand made for a boisterous pre-match atmosphere but the opening exchanges were less enthused. Maidstone made most of the early running with Blair Turgott and Justin Amaluzor looking to cut in from either flank.

Fleet’s first foray of any menace came seven minutes in when Dean Rance, whose midfield work was exemplary all afternoon, laid a pass into Gozie Ugwu’s feet and his shot back across goal was touched behind for a corner.

Four minutes later another chance came courtesy of a Chris Bush free-kick from the right that floated along the six-yard box. Maidstone did well to clear that but Weston recycled a cross for Ugwu to head wide.

Maidstone came back into it with a couple of corners and from the second one, the Fleet defence went to sleep as a ball found Josh Taylor in acres of space on the edge of the box. His low drive through a crowded box was well spotted and well saved by the diving Nathan Ashmore.

Ugwu, with two assists and two pieces of the woodwork to his name since his return to the club on loan, finally notched the goal his performances have deserved and it came via a delightful counter-attacking move.

Amaluzor had the home fans out of their seats as he ran into space but he was well closed down by Bush whose ball upfield found Michael Cheek. The Fleet striker had no right to control it, let alone spin into space and find Whitely. That ball opened up the Stones defence and Whitely’s deceptive cross behind the Maidstone back line just about reached Ugwu who was left with goalkeeper Dion Curtis-Henry to beat, which he did with aplomb.

Fleet’s control of the game after the goal was much more assured with Maidstone failing to test the visiting defence and the game was scrappy at best for a good 10 minutes.

The Stones ended the half well, however, with a succession of corners. Turgott, the chief threat in a striped shirt, fizzed a shot on goal that Ashmore had to tip over and the subsequent corner drew muted appeals for handball as Bush eventually lofted a clearance into the air.

Bush was a standout for the Fleet, calm in defence and robust in the tackle, and his long throw created the first opportunity of the second half, launched into the six-yard box and forcing Simon Walton to head over his own bar.

Maidstone had a half-chance of their own when Powell got to the byline as Rance enquired of the referee as to an infringement. Rance recovered to send Powell’s attempt for a corner, from which Amaluzor got a somewhat fortunate shot away that Ashmore had to block with his chest.

With something of a midfield grind occurring around the hour mark, Fleet attempted to just take the sting out of the game. Rance and Jack Payne often had far too much time in midfield to dictate but it was the Stones who came closest to scoring on 66 minutes when a corner created a lengthy goalmouth scramble. Twice Fleet tried to clear and twice they handed possession back to the Stones inside the box, Ashmore and his defenders having to block before eventually kicking clear.

Periods of inactivity were punctuated by brief bursts of action and most of them came Maidstone’s way. On 73 minutes, the Fleet defence was slow to react to a Turgott run and he cut inside the box, thwarted only by Sam Magri’s well-timed tackle to send the ball to the left of Ashmore’s post.

Fleet’s forwards didn’t get much of a break but Whitely’s excellent delivery from the left bounced just in front of King and Cheek in the six-yard box before skipping away to safety.

Chasing an equaliser, Maidstone applied pressure in the final third without overworking Ashmore but there were a few sticky moments for the visitors. Home fans, already exasperated with referee Lloyd Wood, were up in arms when he pulled play back to book Rance as Embery slipped through the middle into the Fleet box.

With eight minutes to go Embery was in again when he chased a loose ball ahead of King. He stabbed a first-time shot from the right flank and Ashmore had to readjust position quickly to send it behind.

Corners continued to rain down but in the final minutes Fleet were able to clear their lines. Whitely’s break behind the Stones defence was impressive but with Danny Kedwell – on for his 200th appearance – and Cheek in attendance, his attempt to steer the ball round Henry came to nought.

With time ticking away, Fleet killed the game with a simple set-piece manoeuvre. Bush flung a trademark long-throw from the left that the Stones allowed to bounce in the box and as it moved beyond the last defender, Cheek was free at the far post to head home in front of the jubilant away following.

Ed Miller has been Ebbsfleet United's communications manager and programme editor since 2014 and responsible for the club website since 2007. Contact him on ed.miller@eufc.co.uk
PrevPreviousWin signed 2019/20 shirt and save big with earlybird season tickets
NextGozie’s got his bearings back in a Fleet shirtNext