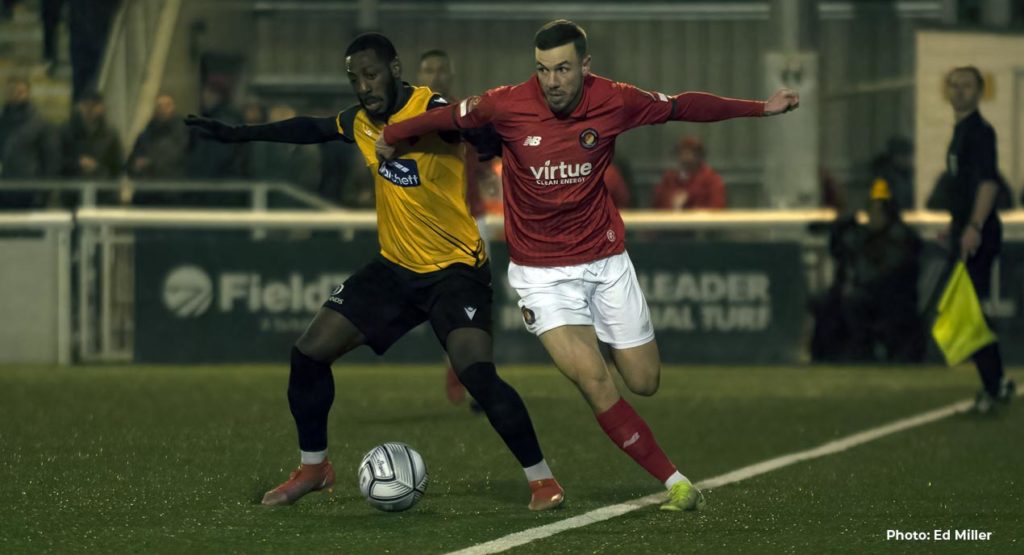 Maidstone made it a Kent derby double as an early penalty conversion and three second-half goals sent the Fleet to defeat, writes Katie Humphris. Both sides were reduced to 10 men when Sefa Kahraman received a second yellow for a push, Stones goalkeeper Tom Hadler swiftly sent marching after him for his involvement in the subsequent bust-up.

With injuries to Sido Jombati and Rakish Bingham, changes were inevitable for the visitors and in came Joe Martin back from his own injury, along with Greg Cundle, Christian N’Guessan, Jack Paxman and Lee Martin.

There was high drama from the start as it took just two minutes for the home side to take the lead via the penalty spot. Roarie Deacon advanced for Maidstone’s first attack of the game, tangling with Joe Martin who went to ground but was then adjudged to have pulled Deacon down as the Fleet defender got back on his feet to challenge.

Despite vehement protests from the visitors that Deacon had grabbed Martin round the neck before he went down himself, Joan Luque stepped up to fire the penalty to Chris Haigh’s left and despite the goalkeeper guessing the right way, it was just out of his grasp.

The referee was kept busy in the early stages showing yellow cards to both Paxman and Lee Martin and he awarded the Stones a free kick when Deacon was again felled by Joe Martin but Regan Booty couldn’t get the better of the Fleet wall.

The visitors couldn’t quite muster the tempo they needed to get back on level terms and though Cundle and Paxman were willing runners as they toiled to make in-roads in the Maidstone half, there was a struggle to create anything too threatening.

Paxman sent a free-kick into the box from a promising position but that was cleared away and both Cundle and Lee Martin had shots blocked by a wall of amber and gold. Dominic Poleon’s strong run on 29 minutes released Craig Tanner who then carried the ball through midfield before slotting it to Cundle and he curled a low shot into Hadler’s arms.

Cundle – either running down the left or attempting an eye-catching bicycle kick from Lee Martin’s delivery seemed the most likely source of attack but he couldn’t get any power on the latter chance and Hadler wasn’t troubled.

Maidstone looked comfortable in midfield but seemed content to protect their lead and only Barham’s glanced effort that was saved by Haigh caused any real anxiety at the back for the visitors.

As on Saturday, Fleet went in at the break a goal down with 45 minutes to remedy the situation but the second-half proved to be a painful watch for the 300 visiting fans penned in the corner of the ground. Paxman, who had earned a stern talking-to from the referee shortly before the break, was replaced by Ben Chapman and Kahraman followed Paxman into the referee’s bad books, receiving a caution four minutes in for a foul on Deacon.

Booty’s free-kick eventually came to nothing and Haigh counterattacked, sending a long kick to Poleon who zipped past the attentions of three Maidstone players to find Tanner – he had sight of goal but pulled his shot wide.

It was a scrappy 15-minute period to open the second half, with Fleet otherwise stuck in their own half and attempting to release the front runners to no avail. At the other end, Chapman had to intervene on the line to stop Ellul’s header making it 2-0.

The visitors seemed to be stepping up their efforts on the hour mark, earning a number of corners but there was little to trouble the Stones defence from those. And moments later, on 66 minutes, a corner of their own put the home side further ahead. Booty swung it in and as it bounced in the six-yard box, George Fowler was able to convert from close range.

Two-nil down, a difficult job was made even more onerous when Maidstone made it 3-0 three minutes later. A cross from the right flank found Sam Corne unmarked in space to direct and power his header well out of Haigh’s reach.

Elliott Romain and Will Wood were sent on but were unable to prevent the Fleet slipping even further behind on 75 minutes. It was Corne again, as at the Kuflink Stadium, grabbing a brace on the night when a delivery from the right once more sat up as he arrived on the spot to drive a sweetly struck effort into the far corner.

With 12 minutes left, the two sides clashed over in the far corner when Kahraman bundled into Deacon and pushed him into the hoardings. Other players became involved and Hadler sprinted from his box to crash heavily into Kahraman, earning a straight red, quickly followed by a second yellow for the Fleet defender for his initial foul.

Maidstone brought on substitute keeper Yusuf Mersin but the game was well won by that point and the three points stayed at the Gallagher.

Ed Miller has been Ebbsfleet United's communications manager and programme editor since 2014 and responsible for the club website since 2007. Contact him on ed.miller@eufc.co.uk
PrevPreviousPreview: moving on to Maidstone
NextDerby defeat reactionNext