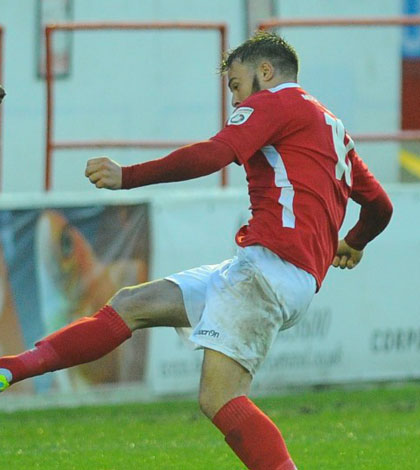 Daryl McMahon continued his winning start to life as caretaker manager as Fleet took full advantage of the Maidenhead goalkeeper’s second-half sending-off to record their biggest league win of the season.

McMahon named himself in the starting line-up as a suspension for Dean Rance meant he was short of bodies in the middle. Academy goalkeeper Rhys Hughes was once again named amongst the substitutes with Preston Edwards’ injury likely to keep him out for more than a month.

Fleet were the better side from the start and Maidenhead found themselves with two players booked inside the first 10 minutes, Danny Green and former Sutton man Simon Downer.

The visitors continued to press as the half wore on and their best effort came from a Matt Johnson shot that Will Britt in the home goal did well to stop. But Fleet took the lead five minutes before half-time when McMahon’s delivery from a free-kick flew through the box and though Billy Bricknell and Matt Godden might both claim they touched it on the way in, the caretaker manager was awarded the goal.

That was the perfect platform on which to build in the second half and seven minutes into it, Britt hauled Anthony Cook down in the box and was shown a straight red for his efforts. Defender Mark Nisbet went in goal and reached well for Bricknell’s penalty but not enough to stop it helping Fleet to a deserved 2-0 lead.

Maidenhead were at sixes and sevens as they desperately tried to camp around their box and protect Nisbet and could almost have scored against the run of play when Adrian Clifton hit the post, but inevitably the Fleet found a way through at the other end on 58 minutes, Chris Sessegnon firing over a cross-cum-shot from wide, Nisbet failing to gather and in it went for 3-0.

Former Fleet striker Jacob Erskine hacked one off the line on 72 minutes as the visitors sought to help their goal difference along, but that might have been jeopardised when Reece Tison-Lascaris was bundled over in the box and Maidenhead had their own spot kick. Brandon Hall guessed the right way, however, and saved the luckless Clifton’s low strike.

The home side did well to keep the eager Fleet at bay in the final 15 minutes but they couldn’t hold out until the final whistle, with Godden firing in the Fleet’s fourth on 88 minutes.