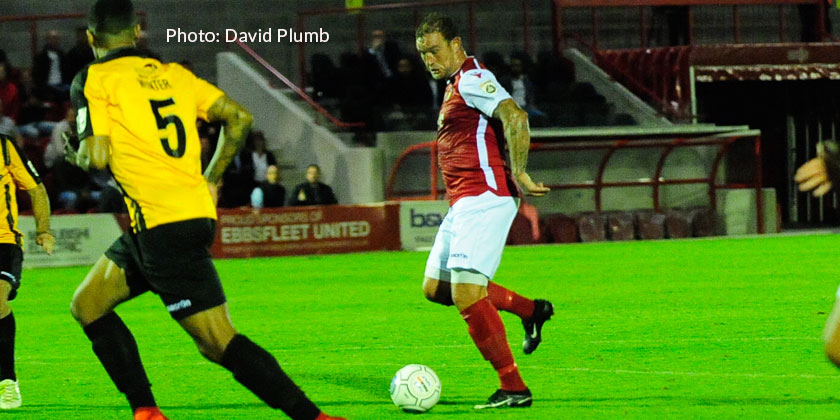 Daryl McMahon was effusive in his praise for goalscorer Danny Kedwell after the Fleet striker, who turned 34 last Thursday, capped his birthday week with his 33rd goal for the club – and on his 100th start.

“It was a very unselfish pass from Powell, most players would have shot in a derby to go 2-0 but he’s very composed,” McMahon told BBC Radio Kent’s Charles Webster. “Keds has been unbelievable tonight. In the last minute he’s nicking it off Prestedge in midfield, playing it out wide, then getting back into the box. I just wish he was five years younger! I’m into my third season now and he’s been a talisman for us. He’s been a joy to work with every day and he’s an excellent professional.”

Another player to get a thumbs-up from the boss was goalkeeper Nathan Ashmore, whose saves either side of half-time kept Fleet in the game. And the manager singled out the first of three top-drawer saves for special praise: “The one in the first half from Stuart Lewis was an incredible save… to have the power to get it over the bar as well from that close under the bar is ridiculous! We know he does that.”

The Fleet boss thought his side were a little underwhelming for an hour or so, but was delighted with the last half hour and, of course, the final result. “I don’t know about the performance,” he said. “The last last half an hour the performance was probably better, up to that it was bitty if I’m being brutally honest. The last half hour we played some really good stuff but the result was a great result for us against a very good side.”

Switching to a back four from that hour mark certainly made the difference for the Fleet. “We definitely played better off the back of that,” McMahon agreed. “In terms of us in possession, I didn’t think we were great, we didn’t move it quick enough. A lot of the game, Maidstone played one up front. We did have three v one so we went two v one in that sense, with Clarkey and Winfield, and pushed the full backs on. We had more of the ball and were more progressive with the ball probably then.”

Luke Coulson switched to the left-hand side, from where he launched the first goal, but McMahon wasn’t placing too much emphasis on Coulson’s more advanced position in the second half. “[His starting position] wasn’t really a defensive position,” McMahon explained, “because he played there on Saturday and set up two goals. It just depends how well the team’s playing and how high we get up the pitch and today we didn’t play well enough [in the first half] to get him high up the pitch.”

Opposite number Jay Saunders admitted he was disappointed “but not too down” after the defeat and felt his Maidstone side, missing key players in defence and attack, could have taken something from the game.

“It’s a tough one to take but to be fair to Coulson, he’s taken his goal well,” Saunders said. “Seth [Twumasi] was outstanding tonight up against Weston, he kept him very quiet. He’s made one little mistake and they’ve punished it. It’s disappointing as up to that point, Ashmore’s had the better saves to make. First half Ebbsfleet had a lot of possession without hurting us and that was always the gameplan. You can’t come here and be open because they’ve got players that can hurt you.”

But Saunders thought the game was an entertaining one and showed plenty of promise for both sides for the season ahead. “I thought it was a great advert for the division, there were two good sides out there, both have improved massively since we played in the play-offs.”

Listen to the full interviews below.

Ed Miller has been Ebbsfleet United's communications manager and programme editor since 2014 and responsible for the club website since 2007. Contact him on ed.miller@eufc.co.uk
PrevPreviousFleet 2-0 Maidstone United
NextKeds not giving up “until his legs fall off”Next