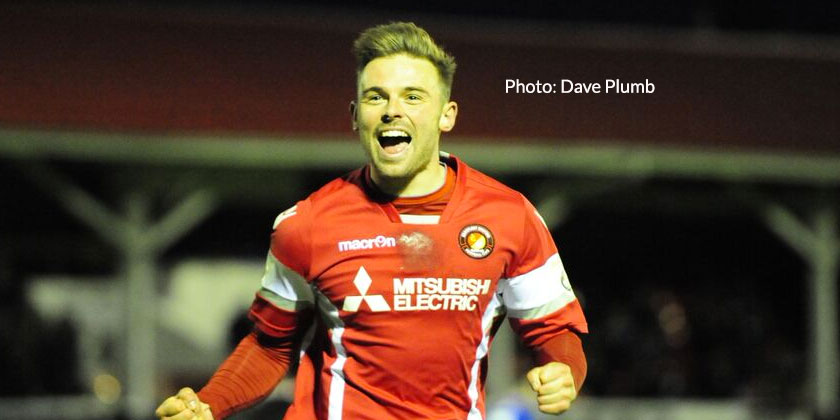 Daryl McMahon was almost as delighted with Matt Godden’s 20th goal of the season on Tuesday night as the club’s top scorer was himself. It was Godden’s first goal of 2016 and the Fleet boss thinks it will prove a weight off his striker’s mind.

“He was fantastic the whole night through again,” McMahon told FleetOnline. “He’s had two spells this year where he hasn’t got goals, at the start of the season and the period just now up to Tuesday.

“The difference in Matty between the start of the season and now is phenomenal. At the start of the season I think he still lacked a little bit of confidence but even through this so-called dry period for him, he’s still been creating chances and making things happen, still being a pest to defenders. He’s a top player for us – Tuesday proved that. Not only did he score, the assist with the little dummy for Kissock’s goal was terrific and he took the disallowed goal really well, which was typical as from the footage, he was just onside for it.”

With fourth-placed Gosport next up at home for the Fleet, who have recorded four draws from their last five games, McMahon is all too aware of the chasing pack but thinks his side have what it takes to step up to the plate. “Single points aren’t enough, we know that,” he said. “But we’re also unbeaten in seven so that’s not a worry. It’s mistakes costing us, giving goals away that we never should. You look how hard we have to work to score goals and we should never be giving away cheap goals for that very reason.

“But this is the challenge, I’ve said it all along, and we’re still in the best position of any side in this league. We should enjoy that, we should be confident and we should use that to go into the last 10 games and not be worried about anyone else.”

The Fleet boss can welcome Bryan van den Bogaert back into the side after the full back sat out Tuesday night with a chest problem. Joe Howe, who played 90 minutes on Tuesday, and Kenny Clark are also in contention for a place with the absence of Matt Fish who begins a three-match suspension. Fleet report no other injury concerns.

Despite Gosport’s well-reported off-field issues, the team are still doing the business on the park with manager Alex Pike demanding pride, passion and fight from his side. They beat Bath City 1-0 in midweek to maintain fourth spot as they attempt to go one better than last season when they just failed to clinch a play-off place. Pike will have a headache at the back, of course, requiring a goalkeeper to fill the spot vacated by Fleet-bound Nathan Ashmore with Gosport having no recognised deputy.

Midfielder Andy Robinson has also departed the south coast club this week, while striker Lee Wort faces a fitness test on a hamstring injury. A few bodies out of the frame could give Academy prospect Connor May the chance to shine, the teenager having only broken into the first-team squad last weekend. Even with a few absences, Boro can still boast an experienced and talented front line with striker Justin Bennett the leading scorer in the division for the past two season, while his support players Dan Wooden and Rory Williams have been together for years and play with plenty of spirit – and goals.

Ed Miller has been Ebbsfleet United's communications manager and programme editor since 2014 and responsible for the club website since 2007. Contact him on ed.miller@eufc.co.uk
PrevPreviousFleet capture keeper Ashmore
NextFleet take Bonner appeal to FANext