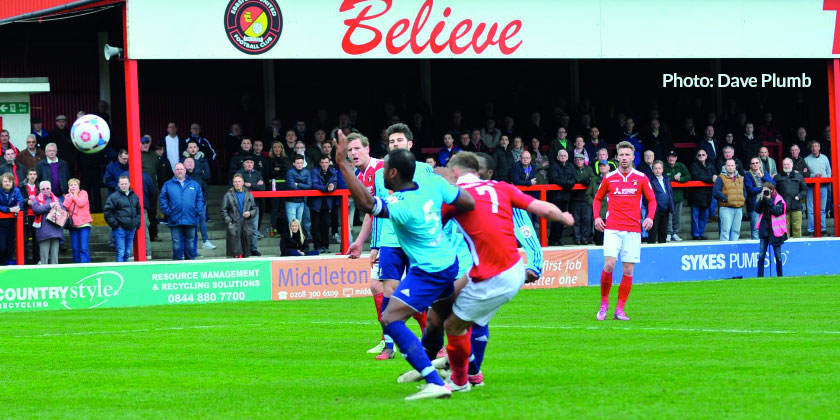 Fleet boss Daryl McMahon says this weekend will be the benchmark by which Fleet can measure their progress since last season. A home game against promotion finalists Whitehawk, followed by the north Kent derby at Dartford 48 hours later, will serve as “a gauge to see what we’re about” McMahon told FleetOnline.

The manager has presided over four straight wins at the start of this season but knows the task to reach six and break a club record will come under severe pressure.

“We’ve not really thought beyond Whitehawk to Monday yet,” McMahon said. “Of course, we’ve had Dartford watched in preparation but until the Whitehawk game is out of the way, we’re not thinking about that. They finished well clear of us and obviously reached the play-off final last season and it’s clubs like those we’re catching up with to challenge this year. They like to attack, they’ll come at us, it’ll be different to what we’ve been used to this past month.”

McMahon praised the contribution of Dean Rance at Wealdstone last weekend and he might be tempted to keep the former Dover midfielder in that role this Saturday, against what is likely to be an attacking Hawks lineup. Rance’s introduction at half-time allowed Stuart Lewis more freedom, while John Paul Kissock and Jordan Parkes were able to press forward with more license.

Steve King’s side are the highest scorers in the league this season, with 12 goals – their two wins saw them score four times each, while their two draws have been to the tune of 2-2. That said, they have also conceded 10 times and the back line must be a worry for King who lost skipper Lee Hills to a long-term injury earlier this month.

Indeed the Hawks could also be without talented striker Jake Robinson, while another blow to the defence is the suspension of Jordan Rose. Striker Sam Gargan is also out for three months with an FA ban for breaking betting rules.

That leaves the responsibility for goals on the shoulders of hotshot Danny Mills and former Cheltenham midfielder Sam Deering, who impressed on Whitehawk’s last visit to Stonebridge Road. King’s side still have plenty to worry the Fleet nonetheless, including Sergio Torres, former Dartford and Millwall midfielder Dave Martin and ex-Lincoln man Arnaud Mendy.

With the likes of Scott Neilson, Torres and Deering on show for Whitehawk, together with the Fleet’s central players, Saturday’s game undoubtedly sees some of the division’s best midfielders up against each other – sure to whet the appetite of home fans, with the Dartford game to follow.

McMahon will know all about the Whitehawk threat having played against them for Boreham Wood at the tail end of last season and he knows how Steve King sets his sides up, having played under the Hawks manager at Farnborough.

Ed Miller has been Ebbsfleet United's communications manager and programme editor since 2014 and responsible for the club website since 2007. Contact him on ed.miller@eufc.co.uk
PrevPreviousMinute’s silence and collection at Whitehawk game
NextNo Limit Street Band to play at Stones clashNext