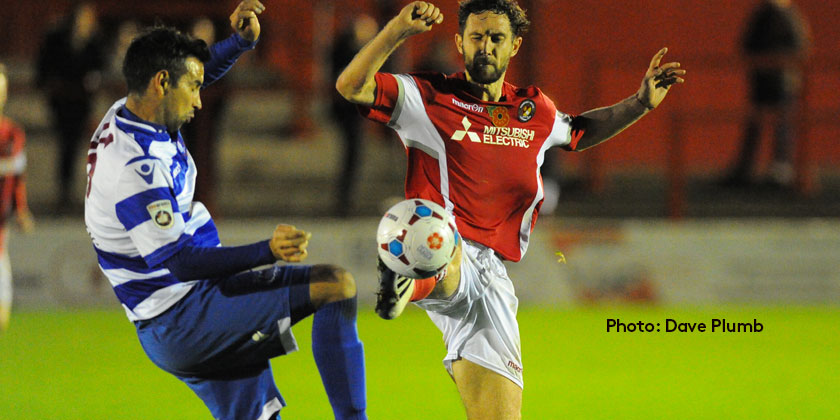 Ebbsfleet United go into action against Bishop’s Stortford at Stonebridge Road on Saturday hoping to provide their home support with a first win since Weston-super-Mare were despatched on 22nd September.

Fleet’s superb away performances have kept them top of the table with breathing space over Oxford City and Maidstone United and an elusive home win is something manager Daryl McMahon is desperate to provide for the fans.

In his programme notes for Saturday’s game, McMahon praised the second-half dominance over closest rivals Oxford (pictured) and knows that greater precision in the final third is something his side need to fine-tune at home. “It’s fair to say we’ve deserved an awful lot more at home than we’ve got,” the Fleet boss said. “I can’t criticise the lads’ performances, their domination of long periods of games. Breaking teams down is key and we’ll have another game of that type this weekend but we’ve prepared well again and the team are prepared, they’re determined.”

There are unlikely to be too many surprises as Fleet go about the task of getting more goals, with Matt Godden currently in a rich vein of form and Danny Kedwell having performed superbly at Eastbourne. That will mean former Stortford loanee Charlie Sheringham is likely to have to watch the early part of proceedings from the bench.

The visitors from Hertfordshire will be hoping to have a few more bodies available than they had in their 2-0 defeat to Sutton last weekend, though will be unable to name Fleet’s Matt Johnson in midfield, of course, with his loan terms excluding an appearance against his parent club.

Elsewhere, they hope to welcome back former Staines defender Chris M’Boungou who was delayed in returning to England after the terrible Paris attacks last weekend after he went home for family reasons. A defensive crisis has also prompted a couple of loan deals by boss Rod Stringer and he has brought in Ian Gayle from Dagenham & Redbridge and Danny Burns from Cambridge United.

Stortford have had an inconsistent campaign but their place in mid-table and only four points off the play-offs is probably a decent enough first third of the campaign for a side whose budget restrictions have been well publicised. In former Bromley and Staines striker Elliott Buchanan they can boast the division’s second highest goalscorer while his striker partner, former Crystal Palace youth Morgan Ferrier, has gained some decent reviews in the short time he has been at the Blues.

The visitors have won three of their last four games on the road and will be hoping to vastly improve on their last visit to Stonebridge Road, the 4-0 defeat on the last day of 2014/15, when Daryl McMahon took charge of the Fleet following his return from Boreham Wood.

Ed Miller has been Ebbsfleet United's communications manager and programme editor since 2014 and responsible for the club website since 2007. Contact him on ed.miller@eufc.co.uk
PrevPreviousCBB on loan as other deals hit the buffers
NextFleet 4-2 Bishop’s StortfordNext