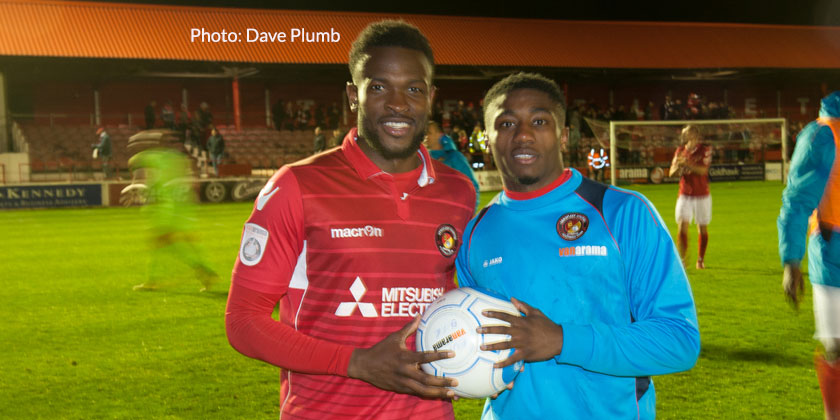 Macca: it was excite the crowd or bore them!

A new club record will cut little ice with Fleet boss Daryl McMahon at this stage of the season who, delighted though he was to entertain the home faithful, will already be thinking about the challenge of Hampton & Richmond Borough next weekend.

And the manager revealed how he told his players to go and excite the 1,229 home faithful in the second half with a 3-0 lead having appeared to have the game in the bag at 45 minutes.

“I said to the players at half-time that the game was over and they could either make the second half exciting for everyone or boring for everyone,” McMahon told BBC Radio Kent’s Charles Webster. “I’ve seen both, I’ve played in both and sometimes you go out and sort of lose your sharpness, lose your edge. And we just asked them to make sure everyone was excited and make sure that when the final whistle goes, that there’s still 1,200 people here clapping you off. Make sure it’s not everyone bored after 20 minutes of the second half and they’ve all gone home to watch Coronation Street or EastEnders. I think the performance second-half made everyone stay and the players got the clap they deserved for their performance.”

Despite the goals flurry, though, McMahon was keeping his feet on the ground, with a tough trip ahead on Saturday. “It’s three points, that’s all it is for us and we move on to Saturday,” he said. “We’ve got a big one at Hampton, that’s going to be a tough game for us. I know they were here tonight. It gives us a different proposition than we had tonight. They’ve got a lot of pace in their side, a lot of power. Away from home, we’ve got to go there and put on a real good performance again.”

Any performance resembling the eight-goal demolition of Bishop’s Stortford will, of course, cheer the Fleet boss no end and he declared himself very pleased with the players’ Tuesday evening workout.

With Anthony Cook and Darren McQueen (pictured above) becoming Fleet’s first-ever double hat-trick scorers in a single game, McMahon joked that the post-match chase for the match ball was a foregone conclusion.  “Cookie would’ve needed a motorbike to catch Darren to be honest. No, they’ve got a matchball each, they’re both happy with that. I did fancy Cookie tonight after he got his first two of getting another one. He was a threat all night. I don’t know how many shots he had in the game, probably double figures.”

The 8-0 took McQueen, Bubb and Kedwell into double figures for the league season, with Jack Powell and Cook not far behind, and McMahon recognised it was a vast difference to last season’s Matt Godden show. “Sometimes when you have that one player who gets most of your goals, they’re the go-to guy and I think this season we have spread it across the team,” McMahon said. “We’ve got a lot of players who have got over 10 tonight. Darren is, probably Keds as well, so we’ve got a few creeping up there. I think we’re a goal threat from all over the park, even the defenders from set pieces.”

Ed Miller has been Ebbsfleet United's communications manager and programme editor since 2014 and responsible for the club website since 2007. Contact him on ed.miller@eufc.co.uk
PrevPreviousFleet 8-0 Bishop’s Stortford
NextCan Fleet breach the Beavers’ dam?Next