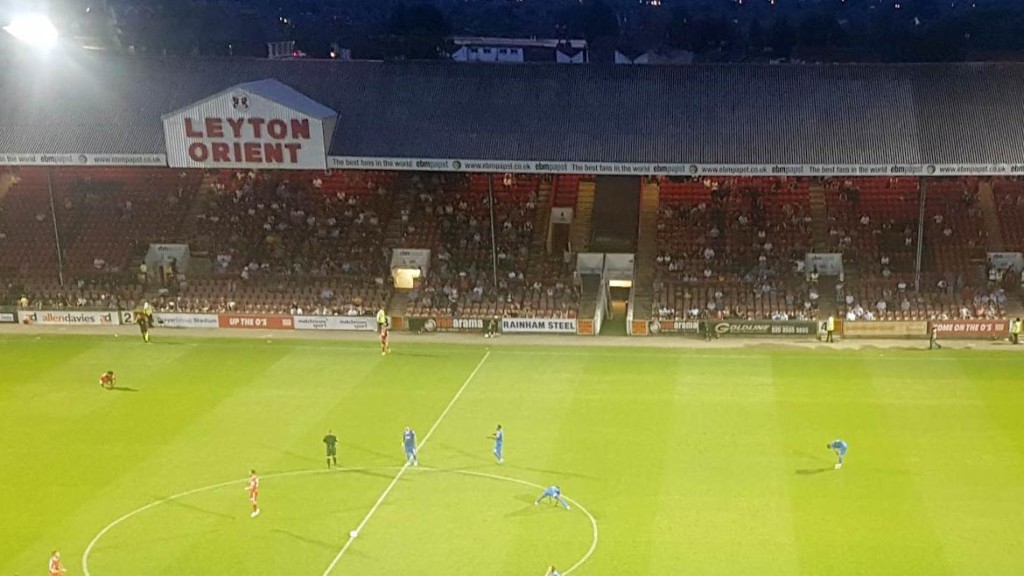 Substitute Corey Whitely pounced in time added on to earn Fleet their first point of the season after Leyton Orient had taken a first-half lead against the run of play. Fleet’s first-half performance didn’t warrant them going in a goal behind and though both sides toiled a little in the second, Fleet will feel the happier with their last-gasp goal — and in particular Whitely who also scored as the two sides fought out an identical result in the previous meeting.

And initially he was rewarded with some buoyant attacking football as the Fleet started very well. Indeed within a minute of the kick-off a ball high to McQueen allowed him to stretch his legs beyond the Orient back line but the striker fired over.

In the same movement, the home side lost George Elokobi to an injury so there was an extremely early substitution, Marvin Ekpiteta coming on.

Fleet forced a couple of corners and free-kicks in the opening minutes, while showed some good width with Myles Weston and Shields. Ebou Adams, roundly booed, skipped through the full backs on 10 minutes, crossing low and aiming for Danny Kedwell in the clear but a defender reached it first to send behind for another corner.

Inevitably, the home side began to settle though they expressed frustration at the referee’s decisions but still the Fleet had the edge. All of that meant nothing on 18 minutes when Macauley Bonne was able to attack space down the Fleet left and with Chris Bush exposed through no real fault of his own, the ball was cut back along the edge of the box where James Brophy pounced to steer a fine shot past Nathan Ashmore.

Fleet answered in fits and starts but had their chances. Weston manoeuvred well to outfox Joe Widdowson and his shot forced Dean Brill to push behind. On 28 minutes Kedwell found space down the left and broke into the box, his low effort drifting just wide.

It was the visitors who looked more likely to score and the busy Shields delivered a cross 10 minutes from the break that almost caught out the goalkeeper at his near post but he recovered to push the ball up and over the bar. Tempers threatened to flare when Weston barged the dangerous Brophy off the ball as Orient raced upfield, earning the Fleet man a booking.

Powell watched a free-kick from 15 yards fly wide before one of the better moves of the game saw an unlikely Bush-Shields combination thread a nifty pair of passes together, Shields lifting the ball over Brill but frustrated to see it roll away from his reach in the six-yard box.

Much like the second-half against Chesterfield, Fleet found it difficult to get going as Orient stepped up their pressing game and harried the visiting midfield, offering precious little time on the ball.

It wasn’t much of a spectacle for either set of fans, with the away contingent frustrated by some competent Orient defending and the home supporters willing their side on to a second goal that didn’t look likely in the opening quarter,

Myles Weston, having been booked in the first half, committed another foul on the halfway line on 56 minutes and that was enough to warrant his replacement by Luke Coulson. That coincided with the O’s enjoying a period in the Fleet half that raised the noise levels. Bonne went down in the box claiming a penalty that Mr Quelch rightly waved away.

The blue shirts were forced into a couple of errors as Orient passed it neatly around the box, probing for an opening and the goal that would kill the game.

Coulson took some of the pressure off with a decent turn and shot that had Brill stretched and McMahon forced the offensive by introducing Michael Cheek for McQueen who had shown bags of energy but had received little supply.

Kedwell had the ball in the net with 20 minutes left but that was cancelled out by the referee pulling play back and another flurry of substitutions from both sides saw Whitely replace Adams who exited to a predictable chorus of boos.

Ashmore saved with his feet as Jobi McAnuff’s deep cross landed kindly for Josh Koroma behind the Fleet defence and his shot would otherwise have been a surefire second for the hosts. They forced a number of corners as Sam Magri failed to get a shout on two occasions and had to steer the ball behind. Fleet almost found the equaliser as the clock ticked down, a ball into the Orient box begging for Cheek to convert but on the stretch he drove over the bar.

With O’s fans celebrating deep into time added on, Fleet clawed back a point. With little overt danger, Whitely collected 20 yards out from Powell and his effort skidded towards its target, taking a touch of Brill as it bounced into the corner.

That wasn’t quite the end as Orient mustered one last attack, their determination in the Fleet box matched by equally manful challenges by blue shirts. However, Ekpiteta managed to deliver a low cross and Bonne’s header was on target but Ashmore did ever so well to protect his goal. And that, apart from a bizarre flare-up at the final whistle, was that.

Ed Miller has been Ebbsfleet United's communications manager and programme editor since 2014 and responsible for the club website since 2007. Contact him on ed.miller@eufc.co.uk
PrevPreviousPREVIEW: Leyton Orient
NextMacca proud as punch after Orient pointNext