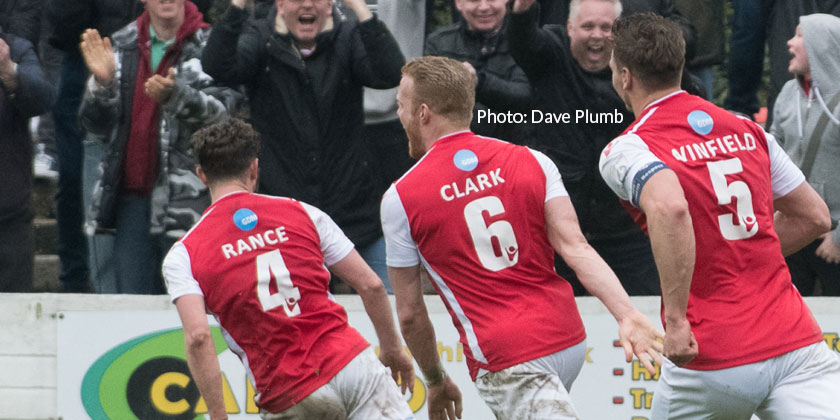 Daryl McMahon has said Fleet’s discipline this season has helped them settle into life in the National League and has been vital given the casualties suffered throughout the campaign.

With long-term injuries to key members of his squad at various times, and again now with only 17 players going into the last six games of the season, McMahon could ill afford further loss through suspension.

“We talked about it back in the summer and if I let suspensions, silly bookings, happen too often, it’s poor management by ourselves,” McMahon said. “So it’s something the lads have worked on really hard this year.

“The discipline is key this season,” he continued. “It’s really vital, especially with the injuries we’ve had, that you keep players on the pitch and not pick up too many silly bookings. To lose a player through dissent or reactions like kicking the ball away, they accumulate over the season and they cost you.”

Fleet have picked up only one straight red card this season and another for a second bookable offence and are third in the National League’s fair play table. And no player has been lost to suspension for yellow cards which the manager argues has been a marked improvement on previous seasons.

“You look at players like Dean Rance, for example,” McMahon said. “He’s had his best season discipline-wise. Every club has those players, involved in everything and they do pick up cards. Dean’s a player that would normally take a couple of yellows for us (or even a red or two!) but he’s really worked to improve that record and I think you can see this season his game hasn’t suffered for it, he’s had a terrific season.”

“It’s incredible when you think it’s eight matches in 26 days including the Dover game,” he said. “It’s a lot of games in a season run-in and we’re left with a small squad in that period. It just means we’ve got to tone training down for the available bodies and make sure the lads are fresh for the matches. That’s the most important thing for the run-in now. Wrexham’s another tough one and then we have miles to clock up in some faraway places.

“Some of this could have been avoided. We wanted to bring the Eastleigh game forward when Gateshead and Bromley were involved in the FA Trophy as both of us were free. It wasn’t allowed as it’s perceived we gain an advantage, but then the game’s called off anyway and we have to pack all these games in, so the advantage just shifts to someone else. We play eight games, Gateshead have nine through April, someone else has four or five. So I don’t really buy the fact that bringing a game forward to enable you to have a sensible run of fixtures lands you any advantage. I’m not going to make a fuss over it but it’s something that could be looked at. We’ll carry on and it’s the challenge we’ve got now to pick up points and wins as best we can.”

That starts with Wrexham in a game rearranged after March’s unseasonal snowfall. Since then, the Red Dragons have lost manager Dean Keates to Walsall and his assistant Andy Davies has taken charge until the end of the season. With just one win in five, Wrexham are in danger of dropping out of the play-off race and it could even be them, rather than AFC Fylde, who are the targets of the chasing pack.

For all the lack of wins recently, however, they are the division’s new draw specialists having chalked up 18 in total to the Fleet’s 16. And with the best defensive record in the league, they are not an easy side to overcome.

The sheer number of draws has curtailed their bid for automatic promotion which earlier in the season appeared to be on the cards and their relatively poor goalscoring record (the lowest of the top 14) has undoubtedly also had an effect. Wrexham were pegged back late on at 10-man Eastleigh on Saturday and skipper Shaun Pearson reaffirmed how important victory at the Kuflink Stadium would be to get them back on track.

The Red Dragons will be without full-back Kevin Roberts who is serving a suspension while top scorer Chris Holroyd injured a foot at the weekend. In his place, however, is Blackpool loanee Scott Quigley who has scored eight goals in 13 games since his move to North Wales and, like Macclesfield striker Nathan Blissett, he is a tall, powerful target man who will be up for a battle with the home centre backs. The visitors have also added former Dover midfielder Nicky Deverdics recently, as well as Hartlepool top scorer Jonathan Franks, while defender-turned-striker Simon Ainge has moved from Harrogate Town.

Wrexham’s last visit to North Kent, in August 2012, ended in a 1-1 draw but they’ll be more likely to recall a 5-0 win the season before. Fleet have won only two of 11 tussles with the Red Dragons, both on home soil and both nine years ago.

Ed Miller has been Ebbsfleet United's communications manager and programme editor since 2014 and responsible for the club website since 2007. Contact him on ed.miller@eufc.co.uk
PrevPreviousU16 trial dates issued for next season
NextFleet 3-0 WrexhamNext