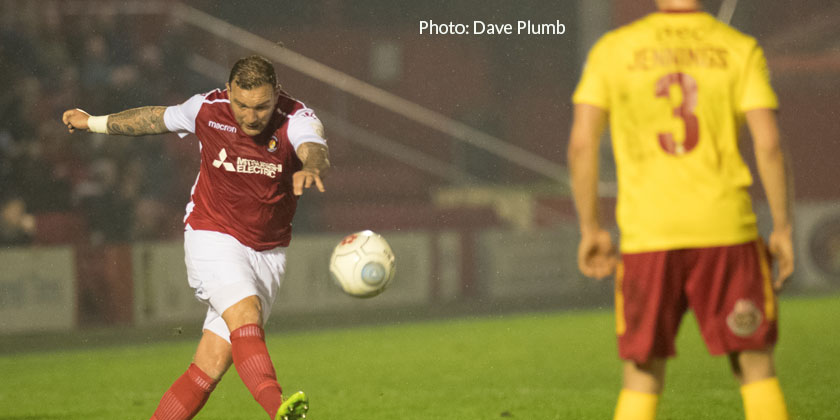 Kedwell on the brink as Fleet seek Holker Street reversal

It’s role-reversal time for Fleet fans with a long memory as Holker Street’s Furness Building Society Stadium beckons once more. Back in 1982, Fleet faced the long trip north to face a Barrow side in ninth place, with us requiring points to avoid relegation. This time it’s the other way around and, although it’s not quite do or die for Barrow yet as it was for the Fleet 36 years ago, Ady Pennock’s side need all the points they can lay their hands on to avoid the drop into the National North.

Fleet, of course, are just as in need of the points to maintain the push towards the top seven and will need to improve on a mixed record at Holker Street. Our only win in seven attempts came with a 3-0 victory in 2008. Otherwise, we’ve witnessed three defeats and three draws, the last being the infamous 1-1 result that kicked off at 9.30pm as a result of a baked-bean-lorry spillage delaying the team and supporters.

Danny Kedwell comes up against two former managers, with Barrow’s Ady Pennock having signed him for Welling United and Jamie Day doing the same for the Fleet. And there’s added motivation for Fleet’s leading scorer with his goal against Wrexham in midweek setting him up for the half-century. That strike was Kedwell’s 17th of the season in all competitions but more memorably his 49th club goal for the Fleet and in current form, few would bet against him to make the 50. Kedwell’s latest strike put him level with Andy Woon in 15th place on the all-time Fleet scorers’ list and two more goals would take him above Tony Sitford into 14th.

Daryl McMahon was down to the bare bones of 16 in Tuesday night’s victory over Wrexham following illness to Dean Rance but he will hope to have the midfielder back fit as the squad make an overnight coach stopover. It’s Fleet’s first of four long-distance away trips with one home game remaining in between and the challenge now, after such imperious form at the Kuflink Stadium recently, is to maintain focus and fitness on the road.

Barrow picked up their first home win in 13 attempts on Tuesday, a poor record going back to October, but the 3-2 victory over Eastleigh has given their survival hopes a shot in the arm. With two games in hand on Woking and Maidstone above them plus  a superior goal difference, the mood around the club has lifted following ugly scenes between players and some supporters post-match the week before in a defeat at home to AFC Fylde.

Pennock is Barrow’s fourth manager of the season and with former Fleet boss Jamie Day alongside him, the pair are plotting an escape that seemed unlikely when the Cumbrian side took over fast-improving Solihull’s remaining relegation slot in the bottom four. Caretaker manager Neil Hornby was the man in charge when Barrow lost 3-2 to the Fleet back in October, when a flurry of goals late on entertained the home crowd.

Barrow’s offer of buy one, get one free tickets to home fans is designed to get maximum backing from the FBSS terraces and Pennock has issued a strong appeal for support to the locals. A club statement read, “The home crowd at the FBSS on Tuesday night were the 12th man as we beat Eastleigh in a thrilling game. As a thank you from us, we are offering a special buy one, get one free offer on all tickets for Saturday’s game against Ebbsfleet.” Former Fleet defender Pennock told the NWE Mail, “I don’t want to wait until Chester on the last day of the season – I’ve said that before. We can’t wait for the Chester game, because it could be too late. That’s why we’ve got to turn up now, get as many people as we can through the gates, be vocal and get onto the referee. I don’t care if people say to me ‘you mustn’t get on the referee’ – we’re fighting for our lives here.”

That’s the storm the Fleet will have to weather but given recent form and an unbeaten run stretching back nine games, bettered only by the top two Macclesfield and Tranmere, confidence in the camp couldn’t be much higher.

The Barrow side Fleet will face is without a couple of faces from the October clash, strikers Byron Harrison and Adi Yussuf having left for Sutton and Solihull respecitvely and Alex-Rae Harvey’s departure to Guiseley the most notable absences. Their danger man at the Kuflink Stadium, Bedsente Gomis, remains at the club while former Gillingham and Dover goalkepeer Steve Arnold signed in January. Another significant addition is midfielder Kingsley James, on loan from Chester until the end of the season. Former Norwich City hotshot Grant Holt is also at the club in his role as player-coach.

Barrow should be able to welcome back a host of players from injury and suspension this week, with former Sutton man Gomis the only doubt.

Ed Miller has been Ebbsfleet United's communications manager and programme editor since 2014 and responsible for the club website since 2007. Contact him on ed.miller@eufc.co.uk
PrevPreviousFleet 3-0 Wrexham
NextBarrow 0-1 FleetNext