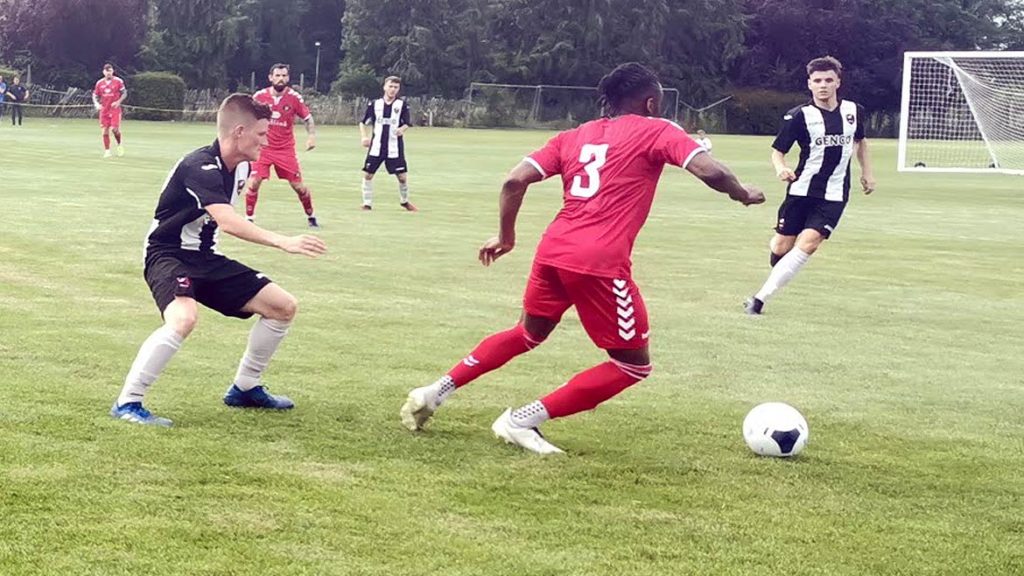 It was the opening pre-season friendly for both clubs and Fleet travelled with four trialists and seven Academy players in their squad. But it was the 10 current first-teamers who began the game with only one of the trialists, up front alongside Gozie Ugwu, getting a start.

And it was Trialist A who should have opened the scoring as early as the third minute when Myles Weston zipped a cross into the box that sat up for the mystery striker but he couldn’t get full control on it.

He had a couple of opportunities early on but the ball wasn’t really falling for him and instead it was Ugwu who put the Fleet in front. The goal came on 9 minutes, Sean Shields’ corner floated back across to the far post where Ugwu met it with a low drive into the opposite corner.

Fleet repeated the trick four minutes later with Shields again launching a cross from the left towards the edge of the box and Ayo Obileye’s presence was too much for the Paperboys’ defence as he sent a firm header past the goalkeeper.

Shields and Weston crossed over either wing throughout the half and Shields was full of energy, his 18th minute drive from the right flank deserving more as both Jamie Grimes and Ugwu went for it.

Both Grimes and Jack King went close and a third goal was on the cards on 24 minutes when Weston skipped between two defenders down the left and sent a low delivery into the six-yard box that Ugwu couldn’t turn home.

The pair combined again three minutes later, this time Ugwu getting a better connection on it but the home goalkeeper made an instinctive save with little time to react.

Fleet remained in control for the rest of the half and made it 3-0 six minutes from the break. Yet again Shields was the supplier as he ran on to a pass, cut inside and fed Obileye, playing in midfield, the big man stroking home a shot for his second of the afternoon.

The home side forced a couple of corners late on and it took Weston to clear one off the line with the last kick of the half to protect Nathan Ashmore’s clean sheet.

That was Ashmore’s afternoon done as he was replaced by another trialist in goal, with two more setting up in midfield and up front. The rest of the first team bar Shields were replaced by Academy players on the hour mark and in the adjustment period, K Sports pulled one back.

Fleet regrouped and the Academy players pushed their opponents back for a spell and on 68 minutes restored the three-goal lead. It was a well-worked goal with Shields once more the architect. From the right he saw the run of Anderson who did well to stay onside, accept the pass and kept his head to turn the defender and fire home for 4-1.

The home side rallied as a few tackles flew in and both benches exchanged words, K Sports upping the ante in the final 10 minutes. James Magri was booked with nine minutes left and Trialist B received two warnings from the referee. With seven minutes left, the Paperboys made it 4-2 as Fleet’s defence switched off and two minutes after that, they fired home an excellent free-kick to give themselves a chance of the draw.

But Fleet held out in front of a good turnout of travelling fans to go into Tuesday’s clash at Dartford in fine fettle.

Ed Miller has been Ebbsfleet United's communications manager and programme editor since 2014 and responsible for the club website since 2007. Contact him on ed.miller@eufc.co.uk
PrevPreviousFleet boss happy to play a waiting game
NextMcDonald very much in manager’s plansNext