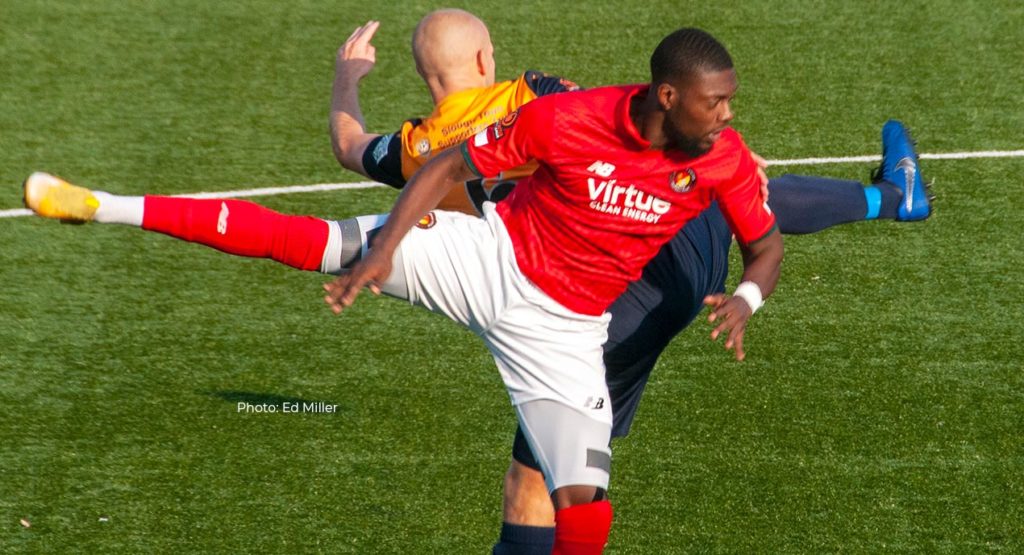 “Just get me the important goals”

Dennis Kutrieb has placed no specific goal targets for his front men this season – just so long as they score when it’s important! And the Fleet boss praised Rakish Bingham’s coolness in converting his penalty kick as an “important” goal to get the visitors right back in the game before half-time at Slough Town.

With Fleet having seen spot-kicks saved at Chelmsford and another at Carshalton (though Bingham rectified that moments later!), Kutrieb had no doubts his penalty taker was up to the task yesterday.

“I saw Chapman in the defence – outstanding!” enthused Kutrieb. “Solly as a holding midfielder, fighting, outstanding! Tanner – great passes during the game – we saw some great performances on the pitch today. You can see [Tanner] is an outstanding footballer. He sees things probably only he sees! That’s what I like and that’s why I love him so much because he’s a great football player. But he’s still fresh with us so he needs to get used to us, we need to get used to him and we need to find the right spot for him. Today was a very good spot for him to be honest because he could play the passes and pick up the balls, drive the play at the right time and that’s why he was an outstanding player for us today.”

The deadlock was broken by Lee Martin with 20 minutes left and Kutrieb explained that was a measure of the skipper’s experience as he waited for the opening to strike, rather than simply hammered it at the first sight of goal.

“[That goal] was after a great pattern of play so it was not by accident. It was exactly how we want to score goals and that was lovely from Marts and a great play from us. He took it and waited for the right moment, he didn’t smash it over the bar, he put it in the back of the net, left bottom corner and that’s how it should be. When you want to score goals, you don’t need to smash it all the time – you need to find the right space where you can put it in the back of the net and I was really happy with the skipper today, he had a great game.”

While the game was won in the second-half, the Fleet boss did concede his side’s first-half performance lacked the sparkle of the second.

“If I can have a wish before the game of course I don’t want to go one down,” he said. “So it was a little bit heartbreaking, especially with this kind of goal. It’s always tough to take for a goalkeeper and for the whole team, it’s a hard pill to swallow. But it was really important that we scored before the half-time and in the second half there was only one team playing.

“In the first half I think we played a good game but not with the same confidence. I don’t know why it was a little bit sloppy in some areas, we didn’t play the football like we are able to play or how we like to play. But it’s normal, it’s still early in the season – perhaps when the first pass is not the right one, you start to think about different things, you’re a little bit distracted or whatever. We will sort it out but I’m really, really happy for these three points.”

Ed Miller has been Ebbsfleet United's communications manager and programme editor since 2014 and responsible for the club website since 2007. Contact him on ed.miller@eufc.co.uk
PrevPreviousSlough Town 1-3 Fleet
NextTanner talks up forward flairNext