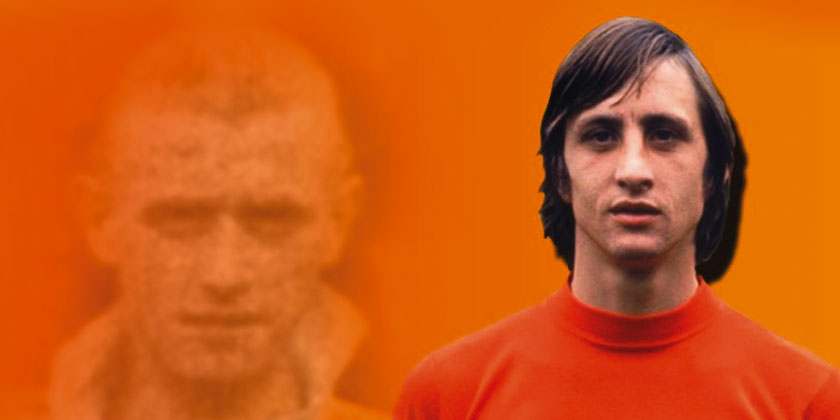 Johann Cruyff: how a former Fleet man kick-started his career

Following the sad news of Johann Cruyff’s death from cancer earlier today, we thought it might be interesting to Fleet fans to discover how a former Northfleet player was instrumental in the rise to prominence of the Dutch master (this article originally appeared in our matchday programme earlier this season). Admittedly it might be something of a stretch to suggest that the Dutch ‘Total Football’ of the 1970s might not exist without Northfleet United – but one man who emerged from Tottenham’s Stonebridge Road nursery in the 1930s went on to have an immense influence on the game in the Netherlands… and on one of its finest exponents.

That man, who is perhaps not as well known within these shores as he should be, was Vic Buckingham. Born in Greenwich in 1915, he became a manager with ideas well ahead of his time.

Before that, though, he was little more than a rookie player dreaming of a future at White Hart Lane. A worker in a cable factory, he played for Tottenham’s junior team and signed on as an amateur in 1931 at the age of 16.

The route to wearing the white shirt in north London in those days was via the red shirt of Northfleet and Buckingham, like many before and after him, was sent down to Stonebridge Road to learn the rough and tumble of men’s football before – depending on how well he did playing in the Kent League – being given his chance in the Football League.

Buckingham arrived in Northfleet in the summer of 1934 alongside a number of young teammates who would go on to feature in the Spurs first team, including Bill Edrich, Bert Ringrose and Fred Sargeant.

After a rare trophy-less season in 1933/34, Buckingham was thrown into an entirely new-look Fleet side that was to play exciting and attacking football and undoubtedly shaped the young player’s future thinking, especially when combined with the similar ‘push and run’ attacking style that Spurs adopted in the late Forties and early Fifties. He was described as having natural elegance on the pitch and a flamboyant personality, traits he would later stamp on the sides under his management.

A wing-half at Northfleet, he scored his first goal for the club in December 1934 at Sheppey and his second (and last!) four months later at Park View Road against the club then known as Bexleyheath & Welling.

Fleet won the Kent League and Kent League Cup and were runners-up in the Kent Senior Shield. For Buckingham, it was invaluable experience under team manager Jimmy Anderson (who would go on to become Spurs boss from 1955–58).

And his performances were such that one season’s solid performance at Stonebridge Road was deemed enough to warrant a recall to Tottenham. He made his Football League debut in 1935, with Spurs then in Division Two, and he remained as a player for 14 years, making more than 200 appearances.

That total, of course, was affected by the intervention of the Second World War, during which time Buckingham served in the RAF while also gaining two ‘wartime caps’ for England.

Buckingham’s greatest contribution to the game was still ahead of him, however, and upon retiring from playing he coached at Tottenham’s juniors before guiding Pegasus (the combined Oxford and Cambridge universities teams) to FA Amateur Cup glory at a packed Wembley Stadium in 1951.

He moved into Football League management at Bradford Park Avenue later that year and within three years was boss of West Bromwich Albion. His leadership brought West Brom their first FA Cup title in 23 years and he almost achieved the first Double of the 20th century as the Baggies finished runners-up in the league by just four points.Buckingham’s brand of fluent, attacking football led to West Brom being called the ‘Team of the Century’ in some quarters and one national newspaper suggested the entire playing squad be chosen to represent England in the 1954 World Cup.

Under Buckingham, West Brom became one of the leading sides in the country, reaching the semi-final of the 1957 FA Cup and achieving three consecutive top five finishes in Division One. Furthermore, he was very influential on the players under him, one of whom was a young Bobby Robson.

Prior to becoming manager of Sheffield Wednesday in 1961, Buckingham had his first spell in charge of Ajax Amsterdam (introducing a 12-year-old by the name of Johann Cruyff to the youth side) but on his return to England became embroiled in a match-fixing scandal, whereby three of his Wednesday players were accused of taking bribes to fix a match. Though no allegations against Buckingham stood up to investigation, his reputation in England was tarnished and he departed in 1964.

The effect of his exile from English football, however, was to benefit the Dutch game. Building on the work he had started in 1959, he turned Ajax into one of the most flourishing young sides in northern Europe. He brought through the hitherto unknown young midfield talent Cruyff, handing the youngster his first start in senior football. “He’s a useful kid,” was Buckingham’s understated observation.

In Europe, Buckingham was able to espouse a short passing game that weighed heavily on possession and off-the-ball movement, which contradicted the traditional combative style of the English game. In time, the Dutch national side – via the influence of Ajax – would implement a form of this and call it ‘Total Football’. And to many historians of the Dutch game, Buckingham – who won the league and Dutch Cup with Ajax – was the godfather of Total Football.

He preached that each outfield player should be comfortable enough to play in any area of the pitch. Individuals were free to move between positions and to the area of the field where they could inflict most damage upon the opposition – but only if responsible enough to cover for their teammates when not attacking the ball.

“Possession football is the thing,” Buckingham would say, “not kick and rush. What pays off is educated skills. If you’ve got the ball, keep it.”

It was a tactic that, built upon by legendary Dutch coach Rinus Michels, would win Ajax three consecutive European Cups and see the Oranje reach two World Cup finals in the Seventies.

Buckingham managed back in England with Fulham where he instigated ballet practice amongst his players to improve their balance! Such innovations didn’t go down well in England.

And after a spell in Greece, he moved to Barcelona in 1969, taking them from a relegation spot in La Liga to European qualification inside a season. In the next season, he guided them to second spot in La Liga and won the Spanish Cup in 1970/71. His side were handed the trophy by an unhappy-looking General Franco who was no fan of the Catalan side.

Usually the epitome of an English gentleman, Barca players recall one of his motivational techniques in a game against Real Betis was to karate kick a board containing their tactics against the dressing room wall and yell “ **** BETIS! ” at the top of his voice.

Buckingham went on to two more high-profile management jobs with Sevilla in Spain and Olympiacos in Greece before retiring and he died, aged 79, in 1995.

His legacy was certainly one that deserved greater prominence. He passed on the seeds of a footballing revolution to the likes of Michels and Cruyff whose tactical mentality runs through the Barcelona side of today, where both men had spells as manager. And Buckingham’s passion for football played with exuberance and expression came directly from his experiences of playing under Tottenham manager Arthur Rowe (himself an old Fleet player) and the first side in which he played free-flowing, exciting football – Northfleet United.

Of course, as mentioned in the introduction, this is by no means to suggest a direct line of tactical innovation from Stonebridge Road to the Camp Nou but it’s nice to think there might be a piece of Northfleet DNA – however small – running through one or two of the continent’s biggest clubs!

We can, after all, lay claim to the current England manager as well…

* Buy Set In Concrete: The History of Northfleet United on this website via this link.

Ed Miller has been Ebbsfleet United's communications manager and programme editor since 2014 and responsible for the club website since 2007. Contact him on ed.miller@eufc.co.uk
PrevPreviousHall keeps Kiev clean sheet
NextFleet visit Seagulls hungry for pointsNext