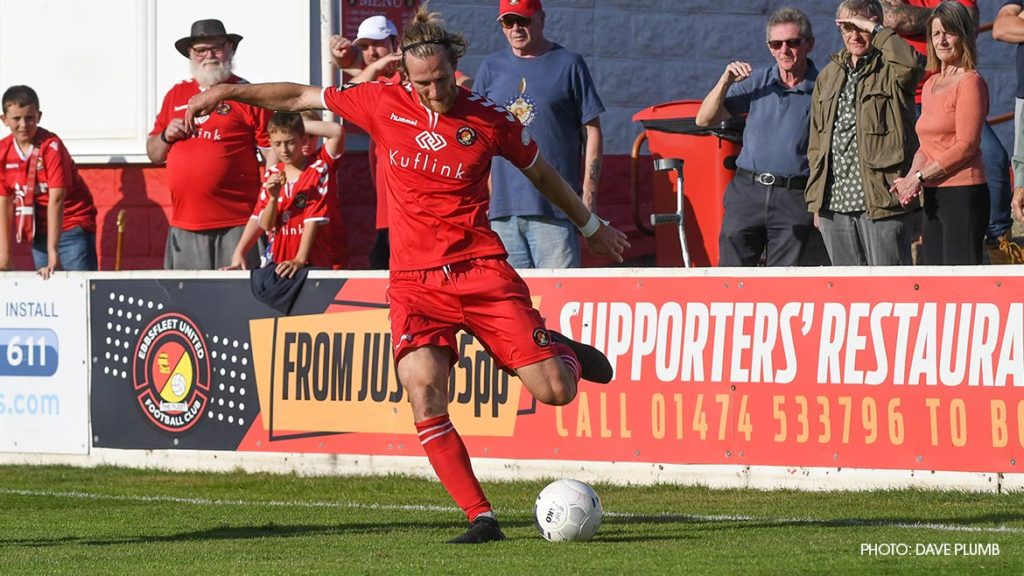 It’s up to us to perform, says Grimes

Back in the starting lineup for the home defeat to Barrow, defender Jamie Grimes shared the frustrations of Fleet fans and his fellow players as his side crashed to a seventh defeat of the season.

The 28-year-old summer signing from Macclesfield Town says his teammates are desperate to carve out three points on home soil but acknowledged they need to dig much deeper.

“The gaffer puts us on the pitch, it’s up to us to perform,” he told BBC Radio Kent’s Charles Webster. “I’ve been guilty of it, everyone on the pitch can’t say that they’ve played well this season yet. [Going behind] has been our problem, staying in the game, but it doesn’t seem to be happening for us at the moment.”

Fleet’s away performances have been on the up but returning to the Kuflink Stadium, as against Aldershot Town, it’s felt like one step forward and two steps back.

“I think it’s the way games have gone,” said Grimes. “We have to attack teams a little bit at home and we’ve conceded sloppy goals and then they’ve just sat in and hit us on the counter. The pressure’s built on us just to score goals and obviously get that home win so maybe there is a bit more pressure at home.”

Fleet fell behind to an early goal and were then rocked back on their heels moments into the second half but Grimes said they had fair warning of goalscorer John Rooney’s threat.

“We spoke all week about Rooney,” he revealed. “He’s got a bit of quality and he scores some good goals, he’s scored some crackers and we need to get tight to him. We’ve given him 20 yards of space on the edge of our box so we’re to blame for it, we’d been told. We haven’t had the inquest completely yet as why but when you’re a goal down, then it becomes a bit stretched.

“The way they played, with possession football, it became a bit cat and mouse: them attacking us, us attacking them. And then second-half, we said in the dressing room, we’ve got to really dig deep, get a goal and they’ll fold. Seven seconds in we’ve conceded, just a straight ball down the middle, ricochet, goal and it’s an uphill battle from there.”

That way of things has been a theme of Fleet’s season so far but Grimes is adamant he and his teammates have the determination to dig themselves out of the hole.

“I can’t put my finger on why. We’ve got a great group of lads in there, we’re all working really hard in training, doing our own stuff at home. It will come. We will get that result because we’re all working so hard at it. I think we need that bit of luck to get a 1-0 win, a clean sheet.

“A clean sheet for me as a defender is massive, we’ve not had one yet. We get that and I think we will kick on because we’ve got the players. I love those situations just to keep a clean sheet. As a defender, even 1-0 up, holding on to things, that’s the dream situation. But we haven’t had that this year.”

Fleet are now under increased pressure to get something from the Barnet game on Tuesday night and the squad must once again put an adverse result behind them.

“We need to get our first win at home,” Grimes said. “Everyone in the dressing room is fully committed to that. We’re all working really hard. The gaffer hasn’t said yet but we might be in tomorrow, and Monday working at it, watching videos and watching Barnet, working on our shape and it’s up to us then.

“We’ve got to concentrate on our own performance. If the 11 players play well and play better than their [opposite] man, we’re going to win the game but that’s what we’ve got to do.”

Ed Miller has been Ebbsfleet United's communications manager and programme editor since 2014 and responsible for the club website since 2007. Contact him on ed.miller@eufc.co.uk
PrevPrevious“The league table doesn’t lie, we’re in a battle”
NextCan Fleet be stung into action on home soil?Next