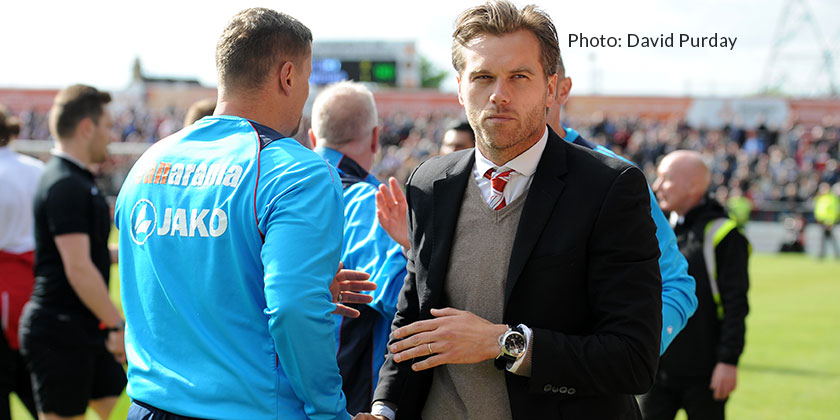 “It’s going to be a busy few months” – Macca

Daryl McMahon expects a busy few months ahead after already being inundated with agents’ calls while also needing to tie down numerous members of his promotion-winning squad to new contracts.

“Probably 10 agents phoned me today,” he told BBC Radio Kent Charles Webster at last night’s Sponsors’ Evening. “It’s going to happen now we’re at that level. We’re an attractive club to play for, geographically in a good place in terms of Kent, Essex, London. Everyone knows what’s happening with the club in terms of the stadium, etc , so it’s going to be a busy few months.

“It’s just about us making sure we get the right people here, like we have now. We’ve got some terrific players here and a lot of them are out of contract so we need to sit down with them players in the next couple of weeks and sort a few people out.”

The Fleet manager won’t have his head turned by hasty offers made to him while he’s still catching his breath from his weekend success, however, saying he’s sticking to his principles of having the right people around the club.

“Things come out of leftfield this time of year,” he said. “People you probably think you can’t get, they don’t get what they want and it filters down, so you’ve got to be patient. If you look at us into July we had Jack Powell and Darren McQueen on trial and nine, ten months later they’re both England C players. That shows you what quality you can pick up late if you are patient and get in the right people.”

That was the blend that McMahon believes turned his squad into a real force to be reckoned with as the 2016/17 season progressed, even as everyone at Stonebridge Road struggled to come to terms with the previous campaign’s disappointments.

“Once we got through November, December, I think we started seeing a team come together and formulating and you could see who was going to be here for the long haul and committed and who wasn’t.

“The first season you get over the disappointment of what happened and you look back and think, I’ve learned a lot. We got over the line this year probably because of the experience of last year.

“[After the Maidstone final], it wasn’t just the players, the whole club, probably the fans as well. Where you go into a situation where it was the biggest kick in the proverbials ever, the way it happened. You’ve still got players here from last year who went through that, then you’ve got new players coming in who don’t care about that because they’re here for the new season, they’re not bothered about last year. And it takes time to find the right blend in terms of your team.”

Looking ahead to 2017/18, McMahon was back at work on Monday attending club meetings, and intends to hit the ground running in a league where priorities and expectations have shifted.

“I think it’s going to be more physical, a lot of goals are scored on set pieces,” he said. “We do play good football but I think we’ve conceded 30 goals in 42 league games this season so we can defend as well, we’re not just small. Dave [Winfield]’s quite big! We’ll stick to the same principles, that’s how I think we should play, that’s how I think football should be played if you can do it.

“It’s a different season, it’s a different challenge. Obviously, we’re not going to be expected to go and get promoted in the National League. You look at the sides at that level, your Tranmeres, Leyton Orients, Hartlepools, some very very big sides in there.  We’ve got three Kent derbies, Dagenham & Redbridge, it’s a very big league. In real terms we’re probably a small club  in this division so we have to show everyone what we’re about. It’s going to be different for us in terms of us being the underdog so we’ll adapt to that.”

And the Fleet boss, who took time to unwind amongst sponsors and fans on Monday night, was left to reflect on the heady events of 13th May.

“It’s been good, it still hasn’t sunk in yet really but I’m looking forward to the next few weeks. I’m at a fantastic club and I’m enjoying every minute of it.”

Ed Miller has been Ebbsfleet United's communications manager and programme editor since 2014 and responsible for the club website since 2007. Contact him on ed.miller@eufc.co.uk
PrevPreviousHire Fleet pitch for your games in May
NextThe memories will never leave, says Fleet keeperNext