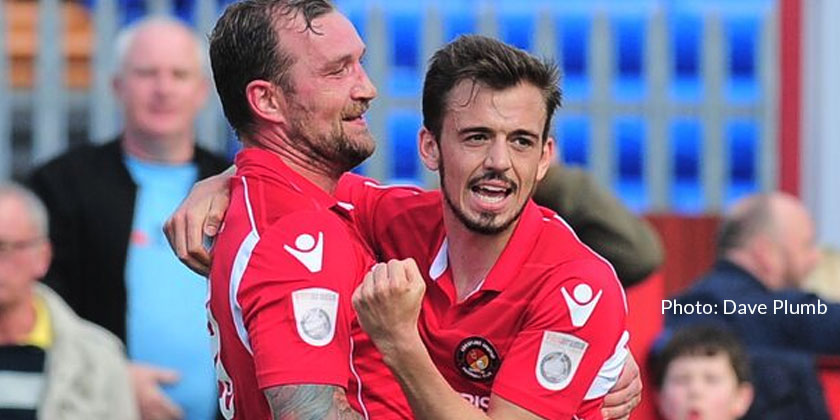 It’s do or die for a place in the final

It will have been 364 days since Fleet last took a 2-1 lead into a second-leg semi-final when the whistle blows on Sunday’s home clash against Hampton & Richmond Borough and anyone with memories of how that drama played out will be hoping for a much more routine affair this time.

But Alan’s Dowson’s Hampton will be in no mood to simply let the form book take over and propel Fleet into their third home final in four years. The Beavers have matched the Fleet home and away across 270 minutes of football this season, barring Aaron McLean’s penalty on Wednesday evening, and that’s all that separates the sides going into Sunday’s match.

Certainly Dowson and his players have been in bullish mood since their midweek defeat, with the manager declaring “I told my players that if they think we’re out of it, they’re idiots!” His players have responded positively, with Twitter the target for winger Tom Jelley’s rallying call “Let’s go get them Sunday” and goalkeeper Sam Howes’ “Bring on Sunday, this isn’t over yet.”

Daryl McMahon and his players will need no reminding that it isn’t over after last season’s events, despite an unbeaten home record that stretches back to November and began – as fate would have it – against Hampton.

“We’ll attack,” McMahon told FleetOnline. “We don’t know any other way. They have to come out and attack us so of course we’ll have our share of defending to do, but we’re not going into this with the mindset to hang on.”

Having left Darren McQueen on the bench on Wednesday night, and kept Sean Shields’ powder dry by making just the one substitute in the 90th minute, the Fleet boss depended on Aaron McLean seeing through another tough shift and the former Hull and Peterborough striker didn’t disappoint.

“For Aaron to come back and hit the standard he has has been phenomenal,” McMahon said. “And to hit the standards he has over these three or four games has been remarkable really and testament to the hard work he’s done here, at Peterborough and at St George’s Park, none of that is stuff people ever see, how hard and determined you have to be to come back. He has thrown himself into getting fit and fighting for the cause. He’s scored two goals and hopefully he keeps on reaping the rewards.”

Another warhorse ready to throw himself back into the fray is Danny Kedwell, who made a surprise cameo in time added on at Hampton. “I put him on for a minute to give our fans and the club a boost in a way, so we can ease him back in,” McMahon confirmed. “We’ve got three days between Thursday and Sunday so hopefully we can work on his arm, get it properly strapped so it won’t bend on him and get him a runout that’s a little bit longer on Sunday. He’ll be back in contention and that’s the main thing.”

McMahon also hinted that he could change things around on Sunday in what he believed would be a “totally different game” on the Stonebridge Road surface and tactically, the Fleet boss has players on the bench that could see more game time in the second leg.

Hampton will be sweating on the fitness of midfielder Harold Odametey who limped off after 16 minutes of his comeback on Wednesday, while winger Brendan Kiernan was also substituted having sat out recent games. They could deploy experienced former Croatian U21 midfielder Stiven Rivic who came on as a substitute in the first leg – now living locally, he has Bundesliga experience with FC Kaiserslautern and Energie Cottbus. Another substitute who made an impact on Wednesday night was wide midfielder Shaquille Hippolyte-Patrick and with Duncan Culley and Christian Jolley up front, that would be a physical and powerful challenge for the Fleet defence.

Aside from their 1-1 draw at Stonebridge Road in November, Hampton don’t have much recent form at the Fleet stadium, with their previous visit a 1-0 defeat six years ago. In all, the Beavers have won two of their eight visits to Northfleet, the last a 4-3 victory in September 2000.

A reminder that this fixture is an all-pay game and that season, half-season and mini-tickets are not valid. We expect a crowd in excess of 2,000 so early arrival, as ever, is advised. Car parking is available at Ebbsfleet International Car Park C for a £3 charge.

Ed Miller has been Ebbsfleet United's communications manager and programme editor since 2014 and responsible for the club website since 2007. Contact him on ed.miller@eufc.co.uk
PrevPreviousMacca makes off with manager’s award
NextFleet 2-1 Hampton & RB (agg: 4-2)Next