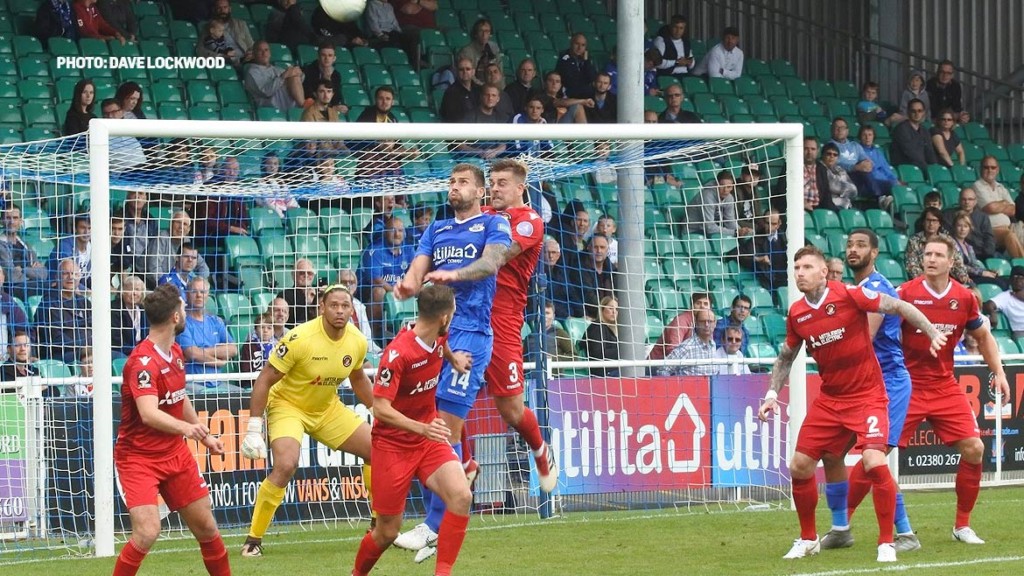 It could have been easier but a great weekend, says Fleet boss

Daryl McMahon felt his side made life unnecessarily hard for themselves in taking the points against 10-man Eastleigh but stopped short of being too critical after they earned the maximum six points across the Bank Holiday weekend.

“It’s a tough place to come, Eastleigh, made easier with them down to 10 men in the first half,” he told BBC Radio Kent’s Charles Webster. “And then we made hard work of it in the second half with the amount of chances we had and not taking them. We’ve got some good play to get in there but just make the game easy for yourselves. But at the end of the day it’s a clean sheet and another win. You get a puncher’s chance at 1-0 and we needed to be a little bit more ruthless in the box. But they’ve been great over the weekend and it is so tough to turn round two games. I doubt there’s many teams that have won two in a row over this weekend and we have.”

Eastleigh hit the crossbar and had a goal disallowed as the Fleet took a while to settle but made the extra man tell in the spells either side of half-time before the Spitfires ended the game strongly.

“It should have been a wake-up call but I didn’t think it was because they scored again from a set piece and that was disallowed for offside,” McMahon said. “I thought we were slow to start, then we got going. In the second half, we’ve had I don’t know how many chances. I don’t mean half chances but one v ones with the goalkeeper and we’ve got to score them.

“[Luke Coulson] should have had a hat-trick. I thought his movement was brilliant, some of his play was excellent again but he’s got to score. He knows that. We know at this level he’s a top player and I think he showed lots of qualities today when he’s come on. His movement was great, he’s just got to score. Sometimes it is that simple – you’ve got to score when you have opportunities. You don’t get given one v ones every week, not in this league.

“I fancied [Andy Drury] with the one that went over the bar on his right foot, similar to Saturday with the pull-back from Magri. I don’t know how many shots we had second half – eight, nine, ten – and good ones as well. It feels like disappointment that we haven’t taken one or two of them. But we’ve got to be realistic and think that over this Bank Holiday weekend, to take six points is a great achievement.”

The one chance that was taken won the game, and it was text-book Danny Kedwell, who outfoxed his marker, turned and wrong-footed the goalkeeper to slot home on the stroke of half-time.

“His touch was terrific, to roll Boyce was excellent,” McMahon enthused. “Good body, good touch, then he gave Ross Flitney the eyes and racked it in at the near post. He’s the best target man in the league. At what he does, there’s no better.”

Ebou Adams was taken off at half-time, primarily because of the yellow card he received in the first-half and the manager was worried referee Lloyd Wood might seek to even things up.

“It was a high foot but you give the referee a decision to make when you go in that high,” McMahon said. “I said to Ebou at half-time, what are you going to gain out of touching that ball? It’s going to be a goal kick to Eastleigh, there was nothing to gain out of it. If it was for a goal or to save a goal, I’d understand it, but when it’s going off the pitch anyway, there’s nothing to gain. And if you catch [the keeper] slightly, it’s a red card, so we’ve just got to be careful.”

Ed Miller has been Ebbsfleet United's communications manager and programme editor since 2014 and responsible for the club website since 2007. Contact him on ed.miller@eufc.co.uk
PrevPreviousEastleigh 0-1 Fleet
NextPREVIEW: AFC FyldeNext