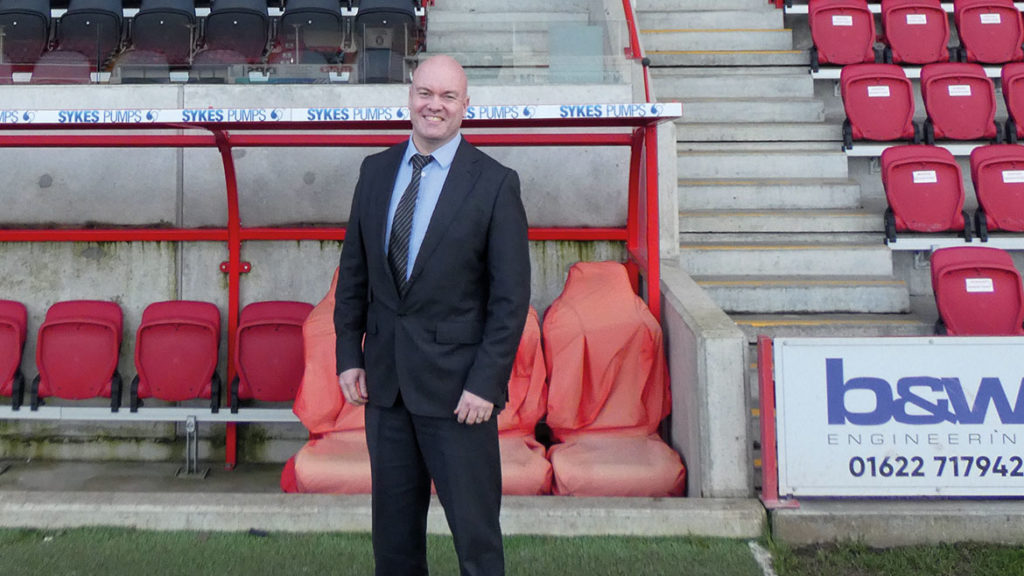 Ebbsfleet United’s new CEO Damian Irvine said today that he was not here for a quick fix as he seeks to reverse the club’s recent problems.

Speaking to BBC Radio Kent’s Charles Webster, he said: “It’s not my intent short-term to come in, fix things and move on. I’m here for the long-term, I’m not an interim position.

“I can’t change something that happened last week, let alone a year ago.  But people have got in touch with very constructive views without an agenda and I need that. I need to hear from supporters what upsets them. Because it’s been a poor season, it feels like the whole world is falling around you, when in actual fact when you find why the trust has been lost, it gives great clarity.

“So tell me in point form, don’t say it’s all terrible and you’ve got a massive job. I know all that! But tell me specifically what we can change that will make supporters have more belief in us. It’s an open door, the more the merrier.”

Irvine acknowledged well-publicised funding and revenue problems and said that has occupied his first three days at the club – even though it’s not an immediate fix.

“Over eight years, the bills have all been paid so it’s a very different situation to other clubs who have had owners who have walked away,” he said. “It’s a timing issue, which is not unusual out of Kuwait in my experience in the game. It requires very pro-active planning from the person sat in the chair here and it’s what my first 72 hours have been all about, getting to the bottom of that. It’s certainly not anything malicious or a case of the funds not being available, it’s about getting them here on time and that’s the key point we’re working on.”

And the new CEO said he wanted the club’s revenues maximised to help offset reliance on ownership funding.

“I’m passionate about making sure the investment in the football is well spent and gets the best efficiency and outcome. It’s very early days and it’s about getting to the bottom of a lot of things.

“In the short term it’s about regaining trust and relationship between staff, supporters and ownership and that can only be done with action. Words are cheap and it’s about small gains and getting some systems in place, good communications with the playing group and fans.

“The longer-term planning, a whole lot of drilling down into things has to be done first. We have to get to the end of this season on the right foot and get that trust back in the supporter base.

“When you run at a large loss as most clubs are, the most important thing to deal with every Monday morning is that funding is covered. The more a club can mitigate that risk by raising its own revenue stream, then the more safety you have.

“We have some wonderful facilities here in the new stand and the club has certainly lost some patronage from supporters this past year but it’s not optimising its revenue capacity at the moment in a lot of areas from my initial brief. You can’t create magic but you can make the best of what you’ve got. My aim would be to get trading and our revenue streams as best as we can possibly get.”

Many of the off-field issues Irvine will address over the coming months but on the pitch, in the short term, he wants the management and playing staff given the freedom and support to concentrate on winning games.

“We need everyone down here, getting behind the team and forgetting about the past for the moment,” he said. “Let’s stay up and then we’ll have a whole new budgeting system and process to go forward next year.”

Ed Miller has been Ebbsfleet United's communications manager and programme editor since 2014 and responsible for the club website since 2007. Contact him on ed.miller@eufc.co.uk
PrevPreviousFleet 1-0 Chorley
NextWe rode our luck but we won uglyNext