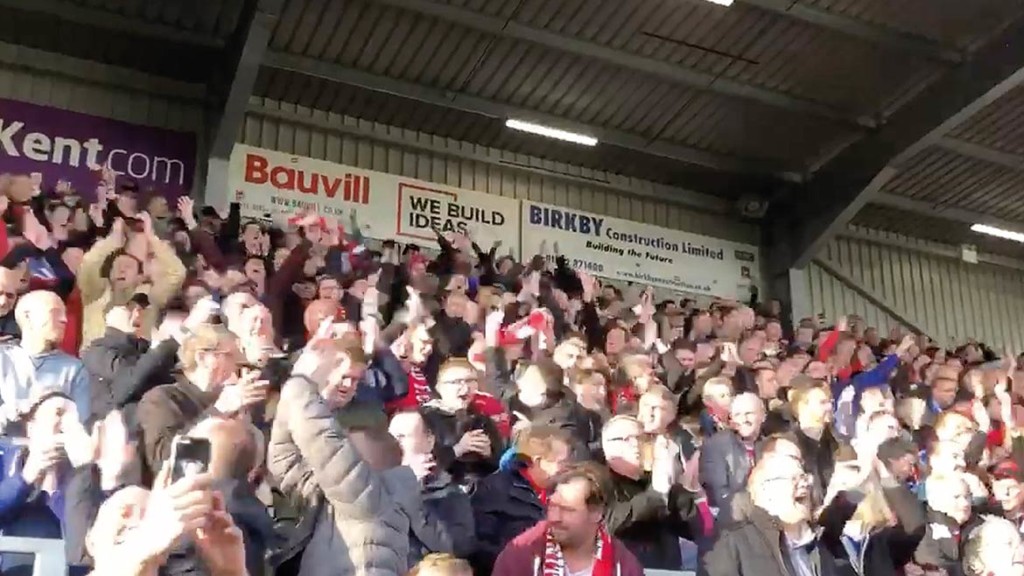 Garry Hill and John Still managed the same club just across the water in Essex but it was the Fleet boss who came out on top in his first ever Kent derby and, much as he enjoyed the experience, he felt it meant more to the fans and players.

“I didn’t [win it],” he told BBC Radio Kent’s Charles Webster. “The players have. I enjoy it when I see the players happy at the end and see the supporters happy at the end. We are thin on numbers but we seem to be able to manage games, formations and the players are getting us results. For our part of Kent tonight I think it’s always sweet to get three points but to beat local rivals it makes it probably even sweeter.”

The Fleet manager admitted his side rode their luck at times but in a game short on quality, he felt the first goal deserved the points.

“It’s flattered us a little bit at the end,” he said. “No disrespect to Maidstone, they lacked a little bit of quality but I don’t think they lacked any endeavour and commitment and work rate and they put everything in. They made it tough for us. But that is the dividing line sometimes between winning and losing the game. If it had finished 1-0 instead of 2-0, the goal that won it was worthy of winning any game. Three or four unbelievable passes, quick movement, a great cross and Gozie Ugwu’s got on the end.”

Hill knew Maidstone would be out to make it tough for his side and he wasn’t surprised at the way the game developed.

“In local derbies I think the league form, league position go completely out the window,” he said. “They’ve been having very encouraging performances recently and it’s given them more confidence. They started the better, they had a lot of energy in the first 20 minutes which we knew would happen. We were aware of that. That’s why we went with a four to start because we knew they would try and get balls down the side and behind us to ask questions and try and stretch us early on.”

Fleet snuffed out Maidstone’s start to the game with the opening goal and Hill felt that was the turning point.

“It was a big goal, it took a lot out of them,” he said. “At that time I think even though they wasn’t really creating many chances they were very willing, they were working very hard and had a lot of energy, all credit to them. I said to the players the second half would be probably very similar.

“We contained it well second half, it was a very messy and scrappy game but at the end [Cheek’s] put the icing on the cake.

“Where you are at the present time it’s not about the quality of the performance, it’s making sure that you dig in deep and you have to win ugly sometimes. When you come away from home, in a local derby, everything does go out the window. Expectation was probably more on Ebbsfleet today to come here and win. So we had more put on us, even more so probably with the likes of Gateshead and Eastleigh not having a league match.

“Anything else that goes on anywhere else can only be a benefit if we turn around and get good results ourselves. Since we’ve been here, I think that’s 20 league games only conceding 14 and 12 clean sheets and that’s a good sign of any team going forward.”

Whatever else the remaining month of the season holds for the Fleet, Hill says the fight and belief runs through the club, despite adversity this season.

“We’ve come a long way this season and that’s not down to me and Ian Hendon,” he said. “It’s nice to take the accolades as a manager, it’s nice to have the accolades when you’re working as a pair but the playing squad, the supporters and the football club are working hard, digging in, being strong together.

“There’s not been any signs of weakness shown. We keep going to work the right way, keep trying to get results for the football club.”

Ed Miller has been Ebbsfleet United's communications manager and programme editor since 2014 and responsible for the club website since 2007. Contact him on ed.miller@eufc.co.uk
PrevPreviousGozie’s got his bearings back in a Fleet shirt
NextPREVIEW: FC Halifax TownNext