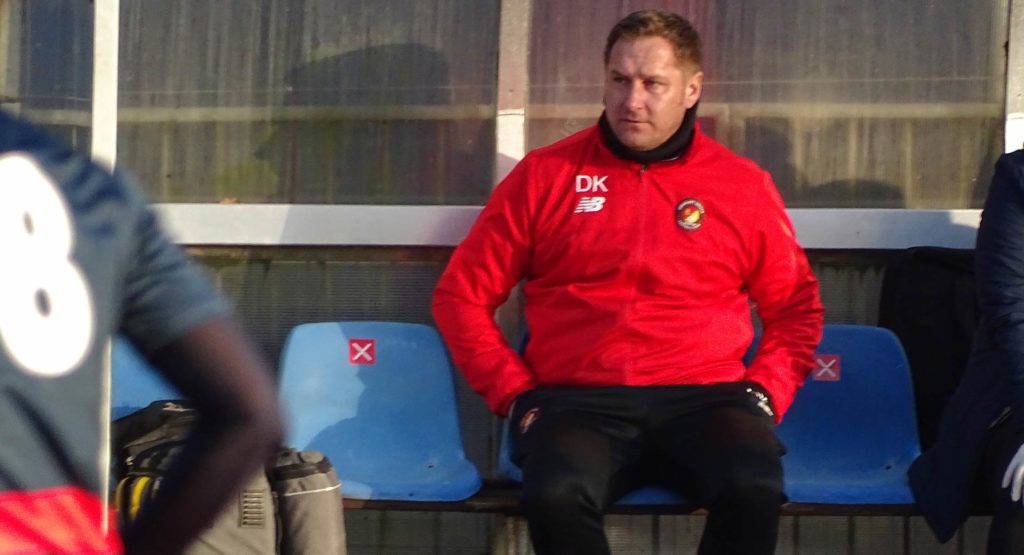 “I wouldn’t have been happy even with a draw”

Dennis Kutrieb was angry at the manner of his side’s late defeat at Hampton having underlined before kick-off the need to eliminate mistakes.

In a tight encounter on a pitch that was cutting up as the game wore on, a mistake was always likely to provide a breakthrough for either side.

“It was terrible and one of these days where you hate football,” said the Fleet boss. “The loss, it’s embarrassing for me, I am so angry, I can’t believe it. You have to be better prepared. You can’t let them cross, that’s the first thing and there’s many other things. I have to watch it back on the video but we have to win this game, it doesn’t matter how or when we score a goal, but I think everyone here in the stadium could see that we were the better side. So even with a draw I would say I’m not happy.

“I felt happy with the boys at half-time but I said we have to score a goal. We played some good stuff and didn’t let any chances go for the opponent. We were really good in the game then one big mistake… that’s what we said [before kick-off], we can’t make mistakes. When you see the pitch here, it’s a terrible pitch but that doesn’t matter, you can’t make easy mistakes when you want to win games.”

And Kutrieb was also unhappy with the offside decision that cancelled out Rakish Bingham’s 35th minute ‘goal’ from a corner, with video evidence suggesting there were two culprits in the Hampton defence playing Bingham onside.

“I won’t understand in 100 years why it’s offside,” said the manager. “It was clearly along the line. “But it’s done so [then] we make the mistake, we know it can happen on this pitch, it can always happen. We have to be a little bit better prepared for it and come back quick into the game. We’re happy with the equaliser and then I was sure we will get another big chance to win this game, and kill it off. So as I said, even with the draw, I wouldn’t be happy.”

The pitch made it hard to play much free-flowing football but Kutrieb was satisfied with the way his side adapted to it in the first-half as Fleet looked solid and assured despite the surface.

“I think everyone could see that we were able, that we were prepared for this game today,” he said. “They [handled the pitch] well for the first 45 minutes. It was only one direction, the second half as well. So we won’t use anything as an excuse because we [coped] well for this pitch, perfect, so I said at half-time, for these kind of pitches, playing such football is great. But it’s not about playing football, it’s getting results and that’s what I said to the boys.

“We had the better chances, we had a [legitimate] goal, but then you need to kill the game off by scoring goals and not conceding easy goals. And when you concede two late goals, then it’s frustrating.

“But that doesn’t matter, it’s gone and we have zero points, the opponent has three points. We get some big compliments but that’s not interesting. The interesting [thing] is who has the points when we look at the newspaper tomorrow. We lose the game 2-1 and that’s the most important thing. So if I’m angry or not, it doesn’t matter, we didn’t get a draw, we didn’t get a point or three points, we have zero. And it’s hard to take for me today if I’m honest.”

Fleet have an immediate opportunity to right the wrongs of Saturday with a trip to Slough Town on Tuesday night but Kutrieb said it was too early to make a call on whether he alters the unchanged side he picked for the Hampton game.

“We have to move on, on Tuesday, against Slough, do it better and get the points,” he said. “We’ll see how they recover and then we’re back on Monday. Tuesday is a 3G [pitch] so there you can play football. But you need the right characters to bounce back after such an embarrassing loss and that’s what we need for Tuesday.

“I was not really unhappy with the boys because, yes, they had the right work rate, they threw everything in that they had, there were no clean kits, everything’s dirty so you can see that they fought. So there’s no rush to make big decisions for Tuesday, but we’ll have to see who’s fit and who can go again.

“The most important point is that we know exactly where we are, where our mistakes are and that without our mistakes they wouldn’t get a chance. Everyone could see on the video there were no chances [otherwise] for the opponent but the only thing that matters is tomorrow in the newspaper there’s a 2-1 win for Hampton, so congratulations [to them].”

Ed Miller has been Ebbsfleet United's communications manager and programme editor since 2014 and responsible for the club website since 2007. Contact him on ed.miller@eufc.co.uk
PrevPreviousHampton & Richmond Borough 2-1 Fleet
NextPREVIEW: Fleet focus on the here and now at SloughNext