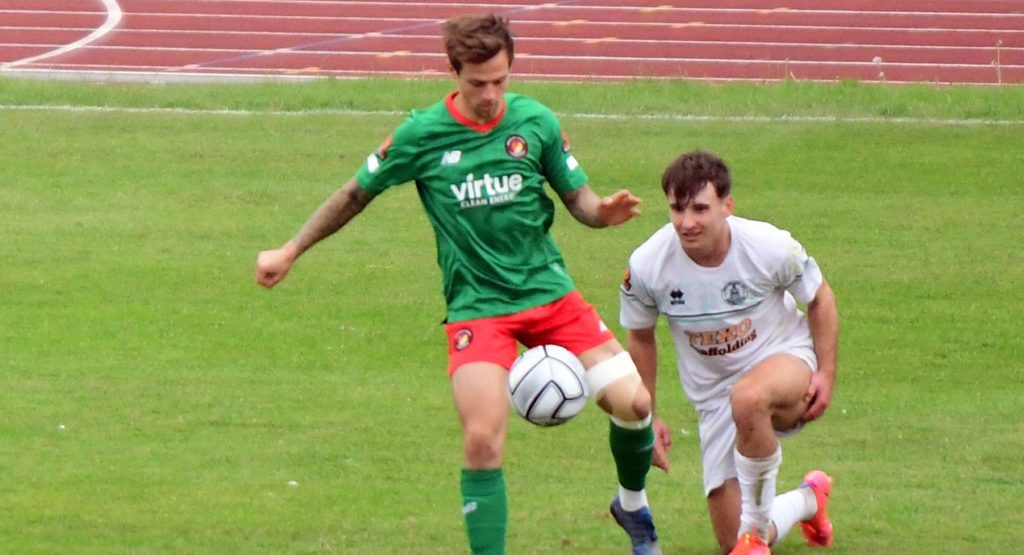 “I thought it was over” says Tanner of goalline clearance

Having been instrumental in Fleet’s two victories at home, Craig Tanner came off the bench at Chelmsford and was just a whisker away from breaking the deadlock with a shot cleared off the line that had Fleet fans prematurely celebrating a goal.

The referee, however, refused to budge on whether the ball crossed the line and play continued – though Tanner felt his effort should have counted.

“I was waiting for the ref to go to VAR to be honest but I don’t think they have it down here!” he told BBC Radio Kent’s Charles Webster. “I thought it was over, a few of the lads thought it was over but it happened so quickly it’s probably quite hard to tell. But my initial feeling was that it was over the line.

“I think [the penalty] was the least of the three penalties he could have given today. He’s given the decision and he said that’s the new handball rule but I was questioning him about the other two fouls before that that probably could have been penalties. We got one in the end and obviously it didn’t go in but a clean sheet, a point and we roll on to Saturday.”

And Tanner revealed that penalty taker Dominic Poleon apologised to his teammates for the miss… not that he had to, said the former Motherwell and Aldershot winger.

“Dom stepped up and he was brave enough to take it,” said Tanner. “It’s one of them that on another day it goes in. He’s apologised but no-one’s ever going to have a go at anyone for stepping up because you’ve got to put yourself out there and be willing to score.

“We caused them a lot of trouble [but] overall a clean sheet, the first of the season, a point away from home with the quick turnaround and four points overall is not too bad.”

Tanner has been at the heart of Fleet’s passing game but he acknowledged it was difficult to get going on a bumpy pitch.

“Where they do shotput and that, there’s a few holes where they’ve thrown them about, so a few divots on it,” he explained. “Obviously our game is passing and we like to get it down and play, so we had to adapt to that. The pitch probably played into their hands a bit more than ours. It’s not an easy place with the ball always going out, it’s hard to get a sort of flow of the game. When you come away and you reflect, you think could we have won? Yeah. Should we have won? Yeah. But we didn’t get beaten and that’s the main thing.”

It’s on to Havant & Waterlooville back on home soil this Saturday and it’s one Tanner hopes the Fleet fans will be able to help influence.

“It’ll be a tasty one. They’re not afraid to put a foot in as well so we’ll have to match them with the physicality side of it. It’s quite hard at the moment to tell who’s got much form, I think everyone’s beating everyone and the table’s a bit all over the place.

“[With the fans], especially the first game, it was a good party atmosphere winning 5-1 against Tonbridge. It helped we got a quick goal. Today, without them, maybe we might have conceded at the end where I think Greg [Cundle] got a great header to clear. It might not always be we rely on them to get the ball in the back of the net, it might be the other way where they help us to keep it out.”

Ed Miller has been Ebbsfleet United's communications manager and programme editor since 2014 and responsible for the club website since 2007. Contact him on ed.miller@eufc.co.uk
PrevPrevious‘We can’t afford to let it under our skins’
NextVaccination bus in attendance for Havant gameNext