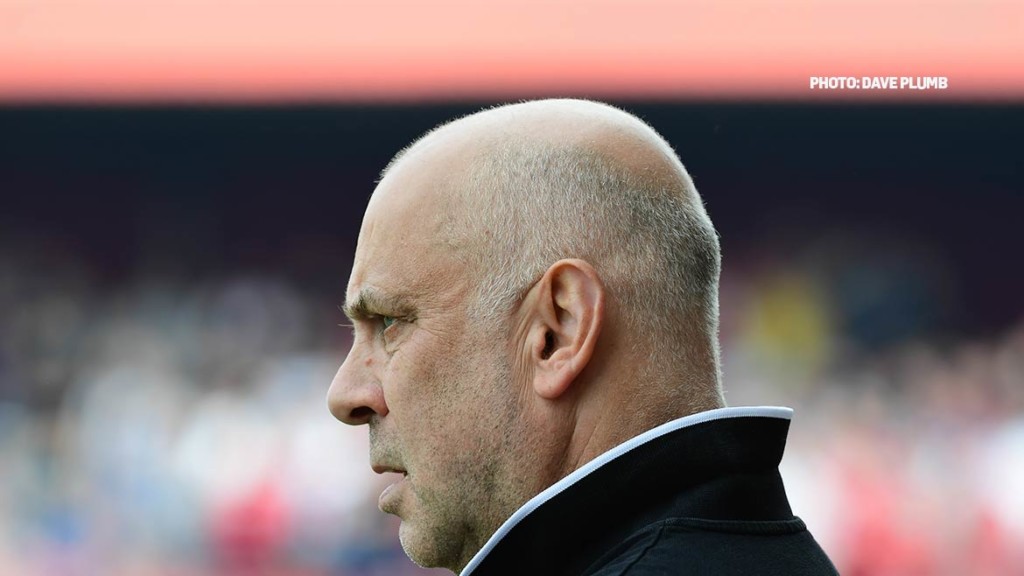 Garry Hill didn’t read too much into his side’s 5-1 humbling at Hayes Lane this afternoon with far more pressing matters to be decided for the club in the summer ahead.

And the manager said he’s more than up for the challenges to be faced as he seeks assurances in advance of a close-season of change at the Kuflink Stadium.

“I’m really hoping that things are positive in view of taking the club forward next season,” he told BBC Radio Kent’s Charles Webster. “It ain’t going to be easy, we all know that, but I certainly want to stay at Ebbsfleet United next season but it’s got to be right all the way around to give myself a chance, the management team and the players who are at the football club and new players coming in, for the best interests for the club and all the supporters. They’ve been different class and the players have been different class all the way through.”

And the Fleet manager will meet with Dave Archer and club owner Dr Abdulla Al-Humaidi to plan a stable platform to take into the 2019/20 season.

“Now it’s a situation where we look forward subject to talking to the boss, me and Dave Archer, hopefully over the next seven days we can see a picture in what direction the football club wants to go. And hopefully that’s agreeable so we’re in a position so everybody can go forward.”

Today’s team lineup had one eye on next season as Hill kept many of his contracted players out of the starting eleven as well as giving game time to players who had patiently awaited their opportunity.

“Put it this way, I’m pleased it’s out of the way and I’m pleased it’s the end of the season,” Hill said. “We made a few changes today for certain reasons. Whatever way people ask about or think of those reasons, it gave us an opportunity to have a look at one or two players. We’ve also got a situation where, no disrespect, but we have to look at the position going forward with certain players financially and there was a fair bit [of that involved today] as well as you can appreciate.

“We had two young boys out there today, players who haven’t played or like Milo in goal  – who I thought did well, I didn’t look at him today and think he was at fault for any goals. Freddy [Moncur] runs and gives his heart and the Academy boy Arif [Omar] playing and we’ve fetched another Academy boy on.

“You look at our bench today and people can ask questions why… well, the way I look at the situation is we’re at a stage now of the season where I didn’t need to risk those players. Those players are on contract for next season at the football club and I’ve got a lot of work to do subject to talking to the boss over the next seven days. Players will have thoughts with agents or representatives on their part and the sooner that can be resolved for everybody to get a clearer picture, I think that’s to the benefit of the club.”

Despite the four-goal defeat on the pitch, losses by Gateshead and Sutton left Fleet in eighth place, the fourth highest in the history of the club and a position Hill believes was ahead of the target when he took over in the late autumn.

“Where we’ve finished in the league over 46 games,” he said, “I’ve felt from the time we came in [over] 20-odd league games in November up to the 42nd game of the season, I’ve been really pleased. It’s just really gone a little bit against us recently and we’ve finished above expectation from where we were when we came into the football club.

“I think they would have taken top 10, top 12, top 14, they were going one way. There’s no secret, it’s not been easy on and off the pitch for everybody at the club whether you’re a supporter, a player, management or looking in from the outside. But you stick together.”

Listen below (apologies for the PA noise)…

Ed Miller has been Ebbsfleet United's communications manager and programme editor since 2014 and responsible for the club website since 2007. Contact him on ed.miller@eufc.co.uk
PrevPreviousBromley 5-1 Fleet
NextFinal chance for earlybird offerNext