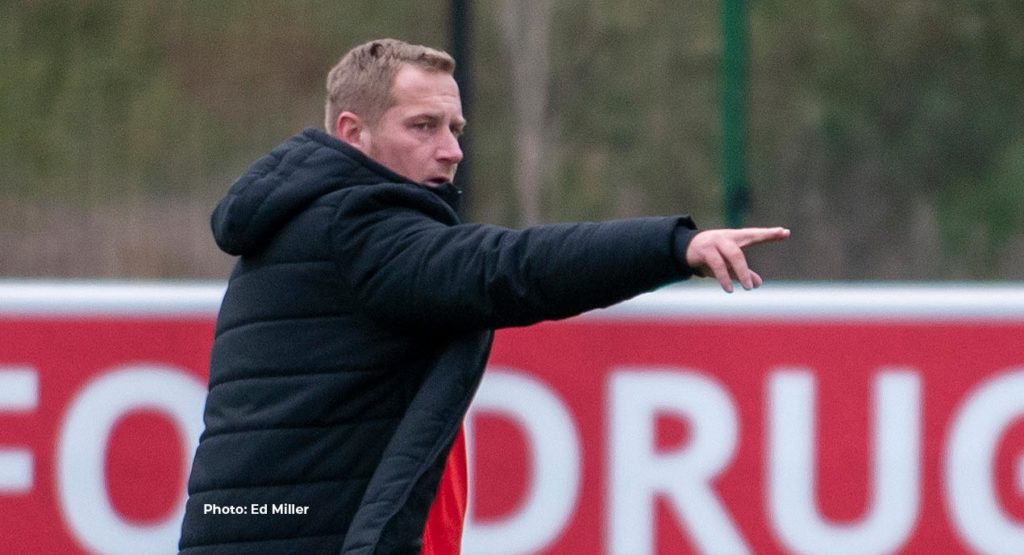 “I can feel the players’ excitement”

Dennis Kutrieb cuts a calm figure on the Fleet training ground. All around him the activities buzz, the drills, the exercises, the mini-games. There is one focus for Saturday and the manager is letting the excitement flow over him and on to his squad.

“So I am not really big-time excited,” Kutrieb told BBC Radio Kent’s Charles Webster. “For me it feels like another qualifier for the big teams – you need to win two more games to get the chance to have a really big, big team. But I can see the boys are very focused, they are excited definitely because they have much more experience than me in the FA Cup. That’s the main point for Saturday – it’s not about me, if i’m excited. It’s the boys who need to be excited and I have a good gut feeling.

“It’s very exciting for every player because they’ve really worked hard during the week. I can see it, I can feel it and everyone is really excited to play on Saturday.”

There is, of course, a two-division gap that the hosts will enjoy but that doesn’t faze the Fleet boss, who has watched the O’s in action in recent weeks.

“I think I would be a bad manager if I say we have no chance,” he said. “Every team, it doesn’t matter in which league, has weaknesses and strengths and we saw them. I know exactly what they are about, I know their players. The boys are prepared. Definitely it’s a big test but that’s the reason why they work so hard because they want to have these tests and they want to know if they are still good enough, if they can compete with a League Two team. And for me it’s going to be a great day because I can see a League Two setup, I can see everything behind the scenes, how we can compete as a team and I’m really looking forward to it.”

He’s not the only one looking forward to it, as Fleet supporters are set to descend on Brisbane Road in similar numbers to the club’s first visit there in the FA Cup way back in 1993. Kutrieb’s been regaled with stories of Steve Portway’s headed goal ever since the draw was made and he wants to write similar history this season, especially with his target of 1,000 supporters within sight.

“[That game] means nothing on Saturday,” he conceded, “but perhaps it can help us after the game when we say the history continued! That would be great for the club, great for the boys and for me as well.

“And [the fans are] very important. They can help us if it’s a tight, close game. I was [at Orient] when Hartlepool were playing [last week], I think they had 650 fans and it was quite noisy. And if it was a tight game on Saturday, the fans can help us definitely, they can be a massive boost for our boys.”

And Kutrieb’s ambitions for Saturday are a million miles from simply turning up and having a nice day out, with the Fleet boss looking beyond the traditional non-league hope of “bringing them back to our place”.

“Would I take a replay now?” he said. “I would say no because I see the chance to win the game. But if there is a replay at ours, I would love to see a packed stadium and get a win there, that’s fine for me as well!”

The Fleet have, of course, enjoyed an extra week’s respite from the fixtures calendar due to the Bath City postponement but it hasn’t affected the manager’s plans or approach to this weekend’s cup tie.

“For the League, it’s always terrible when you see the table and there are teams with 12 games and you have only nine,” he said. “Because you need to play these games, you can’t say we have three games in hand, that could be nine points – you need to play three more games and nothing else, it doesn’t mean you have nine points. When I see that Bath play this weekend again so are back on track and can play and everything else, it’s kind of annoying for me. But it is what it is so we need to deal with it and that’s what we do. But firstly we want to play our FA Cup game and then we can really focus and continue the work in the League.

“If I’m honest I’m already preparing the next league game because we have a tough month, we have a tough November with many league games and we want to continue our run. That’s the reason why we need to be prepared for the League as well. So in my head the cup game has already gone, we only need to get the right result on Saturday and then we can tick that box.”

The Fleet boss has hailed the supporters’ response to selling 850+ tickets already for Saturday’s game and he has urged fans to take that through the four-figure mark. You can still buy and collect tickets right up to 4pm today – any uncollected tickets may be retrieved on the day from Orient’s ticket booth on Oliver Road (beside the Ticket Office in the (main) Justin Edinburgh Stand. The home club will also be selling remaining tickets on the day from their ticket office – it is a cashless stadium so payment is by card only.

Ed Miller has been Ebbsfleet United's communications manager and programme editor since 2014 and responsible for the club website since 2007. Contact him on ed.miller@eufc.co.uk
PrevPreviousBath game gets December date
NextPreview: off to the Os in our 000sNext