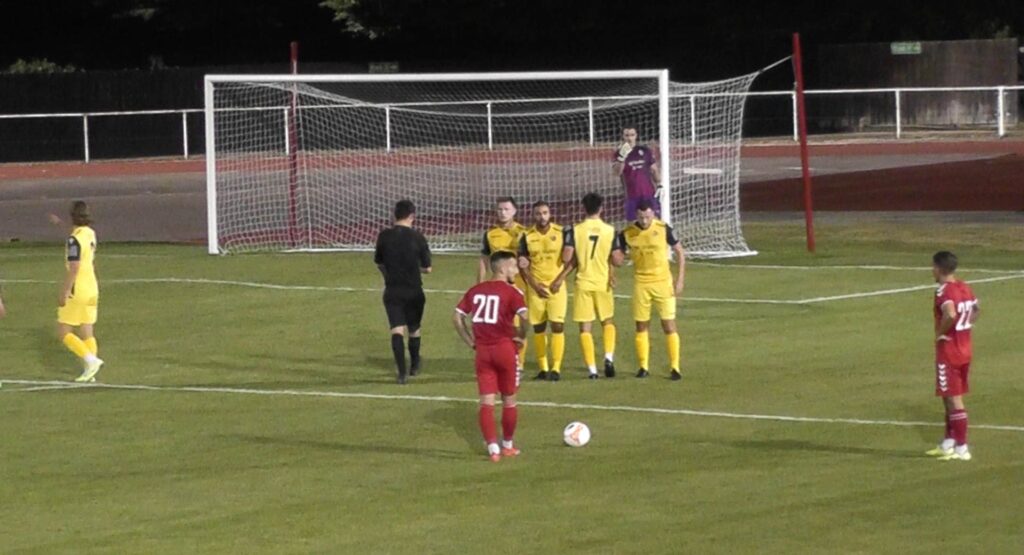 Fleet fans got their first glimpse of their new-look squad in Essex on Tuesday night as Step 3 hosts Hornchurch were able to admit spectators to their stadium for this third pre-season friendly.

And while the match ended goalless, there were plenty of plus points for fans to discuss on the journey back south after a game where Fleet showed skill on the ball, lots of movement off it and a willingness to pass throughout the side.

Dennis Kutrieb handed a start to one of his trialists, keeping the other on the bench for the first 40 minutes, while new signing Reece Grant was eased into proceedings after half-time.

Lee Martin twice went close in the opening 10 minutes, just inches away from James Dobson’s teasing low cross, and the skipper for the night hoisted in a cross from the right on the quarter-hour mark that a defender had to steer away in a rather ungainly manner from under the crossbar.

Hornchurch played some neat stuff as well and made good effect of the overlap down their right-hand side. On 21 minutes a corner from the other side caused Jordan Holmes some mild anguish as he grabbed at the ball in the six-yard box with yellow shirts surrounding him.

From that point the game livened up considerably and Martin played Trialist No.9 through on goal but he was denied by a fine tackle inside the box.

Adam Mekki, playing down the right, teased his way through the Urchins defence and his shot, rather fortunately for the goalkeeper, got caught under his body. Martin then drove through the heart of the Hornchurch rearguard, Dobson skipping his pass across the turf, just eluding Trialist No.9 in the six-yard box.

Holmes suffered a little rough treatment from corners but was on hand to stop Lewwis Spence’s useful delivery from the right where Hornchurch were getting most joy.

Mekki limped off on 40 minutes and his replacement, Trialist No.15, set Martin free on the break on another refreshing run through the middle, his cross again inviting but just too much for Trialist No.9 to get the crucial touch.

Reece Grant made an appearance for the second half, alongside Tom Hadler and Ben Frempah. Hadler was straight into the action, having to throw himself full-stretch at a shot from the left of the box on 48 minutes and he had to be out smartly a minute later to thwart former Charlton and Chelmsford striker Chris Dickson.

The home side began the second-half well and a lovely piece of skill saw a back-heel release Charlie Stimson into the box but Goodman did just enough to put him off.

Hadler saved again from Dickson on 52 minutes before Fleet seemed to have a clear case for a penalty. Adebayo-Rowling, let off the leash to roam forwards thanks to the three central defenders deployed inside him, found the space and as Martin ran into the box he was clearly pushed over but nothing was given.

Fleet’s next opening came on the hour mark, Martin letting fly with a low drive from the edge of the box that the goalkeeper got behind well. There was another penalty shout two minutes later when Grant brought a high ball down for Martin who went over under the attentions of a defender as he crossed into the box but again the referee was not impressed.

The visitors shuffled their formation once more on 64 minutes when Iffy Allen and Will Wood saw their first action of pre-season. Hadler was once again called on to get low to Dickson’s snapshot from distance before his opposite number was again down well to Grant’s shot after a good run by Trialist No.15.

For a pre-season friendly there were nevertheless a rash of energetic and competitive challenges going in and those became more plentiful in the final 15 minutes of the game, which coincided with fewer opportunities for both sides.

Hornchurch saw a late shot aimed just wide before Grant’s quick feet presented Fleet with a chance in the box in the 88th minute but he was almost too quick as his pass ran free.

That was the final goalmouth action of the evening – with plenty of good football on show and suggestions that both sides will be confident of competing in their respective divisions this coming season.

Ed Miller has been Ebbsfleet United's communications manager and programme editor since 2014 and responsible for the club website since 2007. Contact him on ed.miller@eufc.co.uk
PrevPreviousReece is a red!
NextClassic Fleet: the all-new home and away kits for 2020/21Next