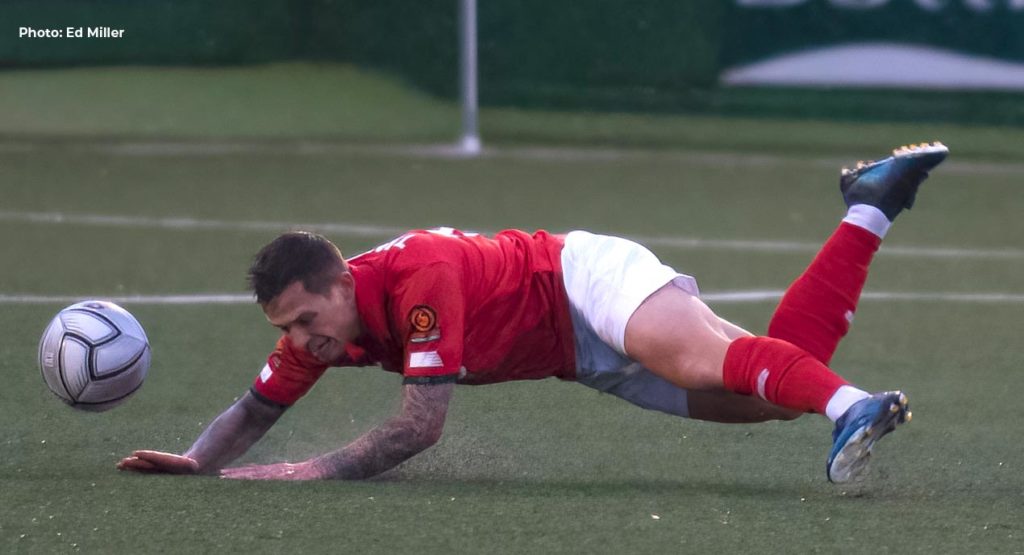 He might joke that he’s the most laid-back player in the squad but with the most assists and a goals tally fast catching up, Craig Tanner’s contribution to the Fleet since his summer arrival is obvious for all to see.

“I’m quite relaxed,” said Tanner after his two goals set Fleet on the way to a 3-1 win at Hemel this weekend. “They always take the mick out of me for being horizontal so I just come out, play football and hopefully do well for the lads, for the club and the fans.”

Having scored his first two goals for the Fleet against Welling earlier in the season, having never managed a brace before in his career, Tanner matched that once again on Saturday but like his manager, he’s not getting carried away with his side’s elevation to top spot.

“I’ve never actually scored a brace [until] I’ve come here. I wouldn’t mind scoring a bit more regularly but, you know, I’m playing a bit here, there and everywhere and as long as I’m playing, I’m happy. I don’t really think anyone’s even looking at the table. Where we’ve had quite a start-stop season, it’s hard to sometimes get into the flow – [for example] we haven’t got a game next weekend. So it’s hard to feel we’re putting a run together at times, but we’ve got some big games coming up and it’s important we just keep chalking points up on the board and we go from there. We’ve not even played half our games yet so there’s many points up for grabs. The table coming up to May, that’s really when it matters”

Wins over Dartford and Hemel have helped propel Fleet to first place and Tanner, who himself had to sit out a game or two recently, believes the return to fitness of several players will be key in a challenging month ahead.

“I think we’ve got pretty much a full squad back,” he said. “We had some Covid cases and injuries like every other team. So when you come in, you’ve got to perform and train. We push each other hard every day and with the quality here you need to keep pushing each other, you can’t get comfortable.

“I had to isolate but luckily I didn’t get it too bad. I was locked in my bedroom for seven days but to be honest I didn’t mind that. [I could feel the effects] when I came on at half-time against Billericay; I don’t know if that’s Covid or the fact I hadn’t really done a lot for 10 or so days but I didn’t get it too bad and there’s a lot of worse people out there so I’m very thankful.”

Of Fleet’s win over Hemel, man of the match Tanner was quick to also praise the contribution of Chris Solly… as well as the travelling fans!

“We knew Hemel were a good team. They’ve picked up a lot of form and they’re definitely a totally different team to what we played in the second game of the season. It was a different surface and we came out brightly, we started well and we implemented what we worked on in training. We controlled large parts but they definitely had a threat. I thought Chris Solly was superb at the back, a bit like a Rolls Royce dictating everything and when you’ve got someone like that there, it makes everything a lot easier.

“And we’re really thankful for [the fans]. The more we perform, the more are going to turn out and it’s always easier cheering a winning team, isn’t it? So as long as we keep doing our best and working our socks off, the more numbers hopefully keep turning up.

Ed Miller has been Ebbsfleet United's communications manager and programme editor since 2014 and responsible for the club website since 2007. Contact him on ed.miller@eufc.co.uk
PrevPreviousBromley draw in Kent Senior Cup
NextFriendly: Woking 3-3 FleetNext