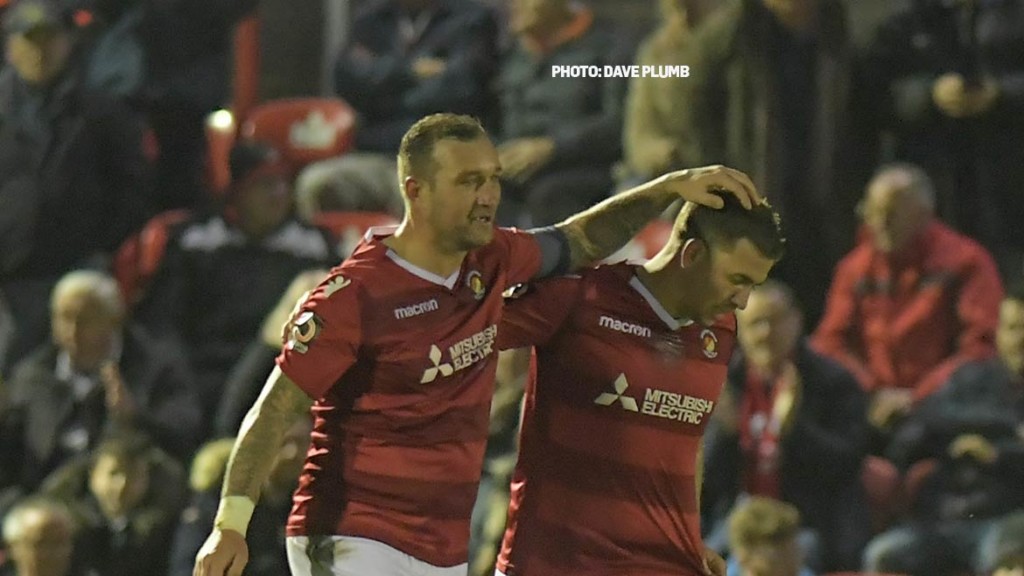 Hill excited by his forward combo

Garry Hill was delighted that Cody McDonald registered on the scoresheet after several near misses in recent games and admitted he was relishing the opportunity to start the former Gillingham striker alongside his former Priestfield partner Danny Kedwell.

“I’ve probably been as excited as everyone else,” Hill told BBC Radio Kent’s Charles Webster. “When you fetch a player with the experience and proven quality of Cody McDonald… he was part of the forward line at Gillingham, when they were together, him and Danny Kedwell. I’ve been waiting for that opportunity. Michael Cheek’s done well but Cody’s been getting fitter and fitter. We’ve only got the three forwards, I just felt it was the right time to get Cody involved today. Keds got two goals and done well again. The front two worked very, very hard. They’re two experienced players up there.

“Cody’s been building up his level of fitness and waiting for the opportunity so I thought the time was right. We got the ideal start. [Cody’s] done very well on the first goal, squared it to Danny Kedwell who’s put us one-up. You never say it’s too early to go in front but we were very disappointed the way we defended on their goal, it’s a cheap goal. It’s invited them back into the game.”

The manager wasn’t pleased about either of the goals Fleet conceded and insisted teams must work harder to breach his defence.

“I’m a little bit frustrated with the goals we conceded,” he admitted, “but to take the three points going into the game against Eastleigh where we will have to be a lot better, it sets up a good game. I’m hard to please, I like a clean sheet and if a team scores against us, you hope they earn that right to score them. The two goals they got today, we ain’t happy with. We haven’t played as well today as we did at Fylde and all of a sudden we scored four goals. That’s football, it goes that way and it is that sort of league. We have to keep going and working.”

Bagasan Graham’s third goal was the clincher in Hill’s opinion, giving Fleet that little bit of daylight going into half-time.

“The game was very open, we found ourselves 2-1 up, but the big goal without doubt was from the corner, Bagasan Graham, a great strike in the bottom corner,” he said. “We needed that cushion at half-time. We were very sloppy start of the second half, invited them back in, lack of concentration, discipline, whatever way you look at it. At 3-2 it becomes very dangerous again and at that time, everyone was saying whoever gets the next goal, it could either way… it was like that. Then out of nothing, Cody McDonald’s worked very hard there so we’ve won the game, we deservedly won, but made hard work of it. Before the game I’d have been pleased to take the three points.

“And we needed the three points. I always said it was going to be a very dangerous game even though they’re sitting at the bottom of the league. Their performances recently have been very encouraging and then they’re fighting to stay in the division. They always become tough games and always at Christmas-time, I’ve experienced it so many times, you should never take anything for granted on league positions.”

Hill now faces an anxious wait to learn of the extent of Dave Winfield’s injury, with the skipper carried off having only returned to action last weekend.

“We have one or two injury concerns at the moment,” Hill explained. “To what scale we don’t know. Dave Winfield’s stretchered off, it doesn’t look good – the report is he’ll have to have a scan. We don’t know where we are on that. It’s disappointing – he’s the skipper of your team, he’s a big player on and off the pitch at the football club, so we have to see what the results are. I couldn’t say anything more on that at the present time. We’ve had to change things around in the second half to shore the game up and make sure we win the game. Corey Whitely was in the squad today but not selected. He had a tooth problem and didn’t train Christmas Eve so wasn’t involved.”

Ebou Adams also left the field early after he was pole-axed by Braintree’s Ricky Gabriel and the young midfielder sustained a fair amount of punishment in his time on the field today, a tactic not lost on his manager.

“He was here, there and everywhere,” said Hill, “and covering a lot of ground. They were fouling him continuously and he was unlucky himself to get booked but that’s what clubs are trying to do a little bit. They’ve been advised to upset him so he loses his discipline. Ebou’s a very good young player and with the likes of Andy Drury and Jack Payne in there, if he’s prepared to listen to them, he could become a very good player. He’s got great mobility and he was a marked man.”

Ed Miller has been Ebbsfleet United's communications manager and programme editor since 2014 and responsible for the club website since 2007. Contact him on ed.miller@eufc.co.uk
PrevPreviousFleet 4-2 Braintree Town
NextCody’s rolling back the yearsNext