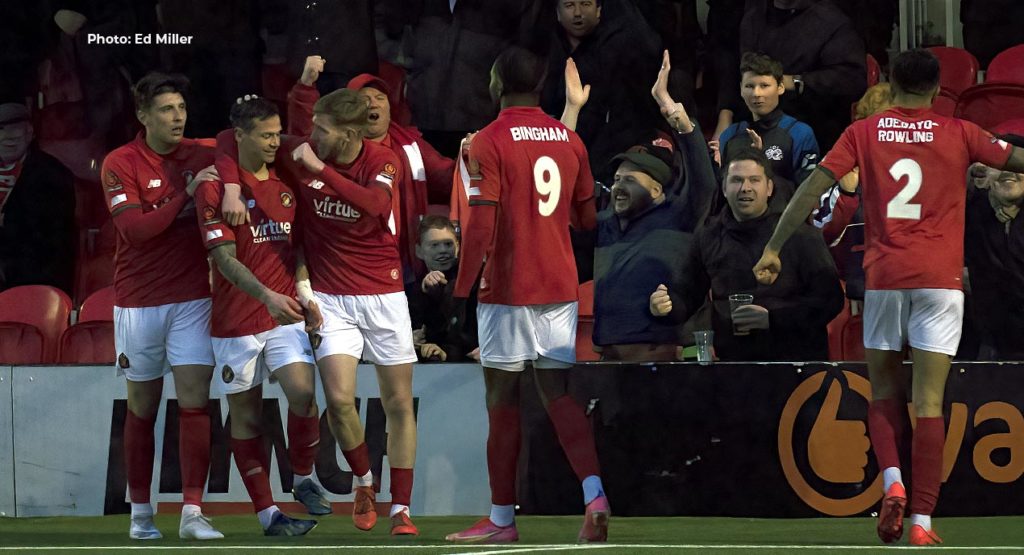 It was doubles all round as far as the Fleet were concerned at Vauxhall Road this afternoon, writes Katie Humphris. Not only did the visitors complete their first league double of the campaign, they did it by the same scoreline as at the Kuflink Stadium and Craig Tanner fired a brace for the second time this season – and for only the second time in his career.

The win took Fleet back to the top of the table on goal difference but the talking point was the professional performance that saw Dennis Kutrieb’s side move into a commanding 3-0 lead at a venue that has been a notoriously difficult nut to crack in the past.

There were two changes from the side that beat Dartford last Sunday, Alfie Egan coming in for Jack Paxman in midfield, while Sefa Kahraman was ill and that meant a return for derby matchwinner Ben Chapman.

On the first of three consecutive away games on 3G, Fleet settled quickly but the first chance fell to Hemel on five minutes and it was youngster Alfie Williams who fired a low shot on goal which whipped just off target.

Moments later the Fleet took the lead courtesy of Craig Tanner. Tobi Adebayo-Rowling had already had a couple of promising incursions down the right and for the second game running, he provided the assist after a neat series of quick passes down the right, sending in a tempting cross. That was initially cleared by the Hemel defence but the ball fell at the feet of Tanner, who took two attempts to get a clean shot away but when he did, it flew past former Dartford goalkeeper Craig King into the top corner.

Sido Jombati’s energetic run from his own half, out wide and the resulting cross into Egan followed hot on the heels of the goal but this time King managed to stop the shot from the midfielder.

The Fleet did have the ball in the back of the net again six minutes later when Rakish Bingham slotted home after Greg Cundle’s patient work down the left looked to have paid off, but the flag went up to the consternation of Kutrieb and the visiting dugout who were convinced both players were onside.

Past the quarter-hour mark and Fleet had clearly established dominance in the game, with Hemel struggling to really make any mark past the halfway line. Adebayo-Rowling continued to tease and outpace his man down the right and he had a chance of his own, beating Aaron Simpson and striking low to force King into a firm save on his line. Dominic Poleon saw another one blocked after good work by Jombati once more as Fleet continued to harry from wide positions.

The efforts of home striker Alfie Cerulli did try to drag his side back into the reckoning and Hemel managed a few sniffs in and around the Fleet box, but it was nothing too taxing for the visitors’ defence. Their best effort fell for Charlee Hughes when he found a route through on goal and a double-bounce almost caught out Haigh, but the ball travelled on through and rolled behind.

Fleet lost Cundle to injury but with a like-for-like replacement in Adam Mekki continued to carve out chances and Bingham came incredibly close to making it 2-0 when another right-wing raid unwound the Hemel defence. Bingham gathered it centrally and with a quick half-turn whipped an effort goalwards but he pulled it just a little wide of the near post. Hemel might have punished that when Chapman conceded a free-kick after a series of meaty challenges on the edge of the Fleet box but Alfie Williams disappointed from an excellent position, with the Fleet wall doing its job.

Adebayo-Rowling continued to torment and just before half-time he smacked a firm cross into the box which required a hastily scrambled intervention from the Hemel defence.

Poleon had looked like he might succumb to a first-half knock but resumed play just fine after the restart, helping the visitors to another lively opening to the half. More quick and pacy direct play from Adebayo-Rowling down the right opened up the home side again and he outran former Maidstone full-back Dan Wishart to deliver another beauty, which Poleon eventually connected with and he shot just wide.

Poleon was on hand to double the Fleet’s lead on 53 minutes, however. After Chapman’s delicate lob forward, Poleon – with typical strong and direct running – turned and outmuscled his marker and his low shot from 20 yards looked like it was turned round the post by King but instead it seemed to spin back inside the goalkeeper and more importantly the right side of the post for 2-0.

Three minutes later the Fleet fans behind the goal were in raptures as number three arrived. Craig Tanner picked an Alfie Egan ball up near the halfway line and charged through the Hemel defence to the edge of the box before firing off a convincing shot that looked like it was heading in the moment it left his boot – and it did just that!

It might have been 4-0 moments later when Adebayo-Rowling’s effort was palmed away by King. Chapman then found Bingham on the edge of the area and his shot was comfortably gathered by King. Another chance then came the visitors way when a Mekki ball out wide appeared to be heading for a goal kick but Adebayo-Rowling did ever so well to reach it and whip it back inside, where Egan lifted it over the bar from close range.

Instead of adding to the away tally, however, attention shifted to the other end as the game entered its final 10 minutes as Fleet allowed Hemel a brief route back into the game. An error at the back as Haigh attempted to clear his lines under pressure from Josh Castiglione gifted Hughes the ball and he just had to keep his head to avoid Solly on the line and guide the ball into the open net.

Marshalled well by substitute Samir Carruthers who sprayed a number of well-directed passes forward, Hemel enjoyed a little spell with their tails up but the Fleet clamped down on any thoughts of a revival and might have completely killed the game when a Tanner run down the right opened up a path for substitute Paxman to drive one just off target..

Ed Miller has been Ebbsfleet United's communications manager and programme editor since 2014 and responsible for the club website since 2007. Contact him on ed.miller@eufc.co.uk
PrevPreviousNew scoreboard – and new partnership opportunities
NextFleet boss hails great performanceNext