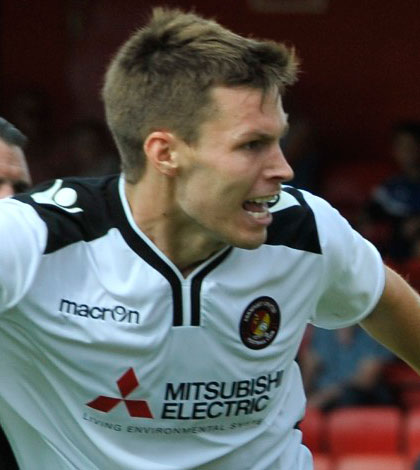 Fleet’s first-ever visit to Hemel Hempstead produced mixed emotions as a late goal pegged back Charlie Sheringham’s first-half header as the visitors failed to build on a decent start, allowing their opponents to scrape a draw in a fairly uneventful match.

There was just the one change in the Fleet line-up, with the expected return of Kenny Clark to defence ahead of Shane Huke. The home side, without a league win at Vauxhall Road all season, were without ex-Fleet player Dennis Oli but did start with former loanee Wes Daly in the middle of the park and new signing Jamal Lowe up front.

As at Farnborough, Fleet stamped their ascendancy on the game early on but it was a familiar story within two minutes when the crossbar denied them the opening goal. A neat build-up saw a cross delivered onto the head of Charlie Sheringham who did well to flick the ball away from the keeper but it bounced off the bar and away to safety.

Three minutes later and the Fleet again unlocked the Tudors defence, Billy Bricknell supplying Sheringham this time but the club’s leading scorer fired it straight at goalkeeper Laurie Walker who got down smartly to thwart him. It wasn’t quite the succession of chances that Fleet managed against Basingstoke, but they had another effort on 12 minutes when Anthony Acheampong dived at Daryl McMahon’s free kick only to see the ball fly across the penalty area and just out of reach.

Fleet continued to feel the frustration and on 20 minutes Bricknell was blatantly pulled back inside the box as he cut inside. The referee waved play on and Bricknell was booked for his pointing out the quite obvious tear in his shirt as a result of the challenge. Matt Johnson then fired in a shot that looked like it was heading goalwards until deflected behind for a corner.

Fleet weren’t held at bay for long and on 27 minutes they finally opened their account. Bricknell crossed from the right and Sheringham was waiting to nod it past Walker to give his side a deserved lead.

But the goal seemed only to signal a slackening off in Fleet’s play and Hemel started to express themselves. A decent build-up on 34 minutes saw them unlock the Fleet defence and Lowe crossed for Lewis Toomey who fired past Brandon Hall only to see his effort denied by an offside flag. Ten minutes after that and Joe Howe had to clear off the line as a cross from the impressive Lowe made it to the far post and too close to the goal for comfort.

The home side came out in the second half determined to claw their way back into the game and though Fleet looked largely untroubled for much of that time, they were forced further back as the clock ticked down. Bricknell saw a good effort fly low past the post after Johnson and Dean Rance had opened up the home defence before Hemel made a flurry of substitutions that ultimately proved their worth, not least the 6ft 5in Oliver Hawkins for Daly.

On 64 minutes Toomey beat the advancing Hall with a deft lob, but Clark had kept running and cleared the danger. And six minutes later Fleet were relieved to see the referee wave away a penalty appeal after James Potton’s legs were clipped but his rather theatrical dive earned him a booking.

Fleet brought Shane Huke on for Aiden Palmer and then Matt Godden for Bricknell and almost extended their lead in between on 73 minutes, Sheringham striking the underside of the bar and then Rance firing against the woodwork from the rebound, though by then the flag had been raised.

Still it wasn’t comfortable for the Fleet, however, and the lanky Hawkins sent a looping header over Hall and just past the upright as the home side pressed forwards. And the visitors should have paid heed as the goal came from a similar move eight minutes from the end. Fleet lost possession in midfield and a pass found ex-Dover man James Simmonds free down the left side. He caught the ball well and sent a lob over Hall and into the far top corner for the equaliser.

Hemel skipper Jordan Parkes shot low but Hall gathered and then in the dying moments the home side could have won it when Potton wriggled free and beat Hall with a shot that cannoned off the post to the relief of the healthy number of travelling fans.

Ed Miller has been Ebbsfleet United's communications manager and programme editor since 2014 and responsible for the club website since 2007. Contact him on ed.miller@eufc.co.uk
PrevPreviousMatch preview: destination Hemel
NextFollow Fleet Youth to DartfordNext