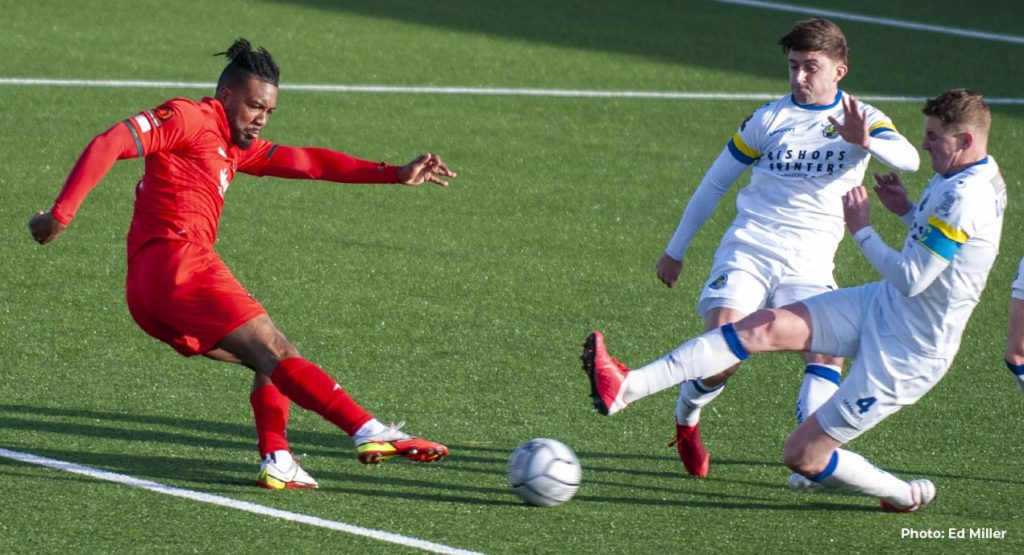 A clinical second-half performance from Havant & Waterlooville handed them the points as Fleet recovered from an early penalty concession only to lose ground as the hosts scored three in quick succession past the hour mark.

Craig Tanner’s equalising screamer midway through the first-half had been a platform for Fleet to build on and for spells in that opening 45 minutes, the visitors looked like they might breach the home goal again but it wasn’t to be.

Havant made just the one change, ex-Sutton skipper Jamie Collins in for Jake Andrews, while Stefan Payne – a brief loanee at Stonebridge Road in 2012/13 – started up front for the hosts.

The Hawks named new signing Mo Diaby on the bench but it was another new man, Sam Smart, who helped them get forward two minutes in to supply Ben Read a decent strike on target that Louie Moulden was well behind. Smart was involved again on five minutes when Chapman felled him on the edge of the box – the referee initially awarded a free kick but typical of Fleet’s luck this season, the assistant referee became involved and changed the mind of the man in the middle and he gave a penalty which Payne fired home with power past Moulden.

Fleet’s first real show of purpose came 10 minutes in when some quick football saw Paxman release Dominic Poleon whose strong battering ram of a run brought him through four Havant players but Billy Clifford did just enough to put off the Fleet front man.

But there was better luck with the next chance two minutes later. Christian N’Guessan’s quick thinking from his own half allowed Fleet some space to advance with Alfie Egan and Craig Tanner then unloaded a superb shot from 25 yards to equalise.

Tanner was the architect of the next chance on 15 minutes, intercepting a ball in midfield to supply Tobi Adebayo-Rowling whose swift low delivery was just turned behind the foot of his own post by Collins. Tanner was at the heart of Fleet’s improved performance, next sending Poleon through on goal. He did enough to evade his Hawks pursuers but Ross Worner did excellently to get a block in and Poleon wasn’t quite in the right position to bring down the rebound for a strike on goal.

After a slow start, Fleet were the more adventurous following their goal as the pace of the game didn’t let up in the opening 20 minutes. Havant picked up again to force a couple of corners and Payne then struck a shot off the foot of the post with all of the goal to aim at when he got behind the red shirts – but the flag had gone up anyway.

The offside flag stayed down at the other end on the half-hour when Egan caught the Havant defence flat-footed, advancing one-on-one to Worner but, coming in at an angle, he attempted to square it and the Hawks cleared. Chapman arrived in on another Egan venture forward moments later but caught it off the side of his foot and it diverted wide.

Tanner turned saviour on 38 minutes when a searching Havant corner was met by Jake McCarthy who got a firm header on target with Moulden stranded but the Fleet goalscorer was there to nod it off the line. It was end to end stuff and Jombati found himself in unfamiliar territory inside the box, slinging a delivery to the far post where Poleon was lurking but frustrated by the white shirts in front of him.

A wicked deflection could have sent Fleet in behind at the break but for a superb reaction save from Moulden. Payne slipped a pass to Manny Duku and his shot cannoned off a foot with Moulden having to reposition himself while back-pedalling and he tipped the ball over.

The second half witnessed a more sedate opening with Chapman and Poleon striking powerful but wayward shots in the first five minutes. It exploded into action on 59 minutes, however, when Fleet should have gone ahead but instead found themselves behind. Poleon worked hard to get on the end of an Adebayo-Rowling pass and he found Paxman in the box.

Paxman got his shot on target but McCarthy somehow got a block in. That allowed Duku to rampage forward and gather the ball on the break and he just had the edge on Jombati and Solly in his wake before letting fly with an excellent strike that gave Moulden little chance.

Havant kept men behind the ball as Fleet tried to respond and Tanner slid a pass into Egan’s path in the box but he was crowded out as he hit it over the bar. But the game got away from the Fleet on 68 minutes when a free-kick to the back post was initially headed down by Collins and held up for Joe Oastler to fire home from close range.

Everything was going Havant’s way then and in the 73rd minute they made it 4-1. A ball forward down the left to Alfy Whittingham seemed to be going nowhere but he managed to reach it and found Clifford inside. A quick pass and with the Fleet defence trying to recover ground, the Havant man hit another clinical long-range effort that soared over Moulden into the top corner.

Substitute Coulthirst gave Fleet a sliver of hope on 80 minutes when he converted from 10 yards after fellow sub Mekki produced a Cruyff turn to supply him from the left. Coulthirst might have set up a grandstand finish with another effort over the bar moments later and he was blocked with a third chance from a corner as Havant began to live a little dangerously.

But when Adebayo-Rowling fired the Fleet’s final effort over the bar in the dying minutes, that was the last hope of a turnaround gone and it was the home side who celebrated the points.

Ed Miller has been Ebbsfleet United's communications manager and programme editor since 2014 and responsible for the club website since 2007. Contact him on ed.miller@eufc.co.uk
PrevPreviousPreview: Fleet set sail for Havant’s stormy seas
NextFleet at Havant – post-match reactionNext