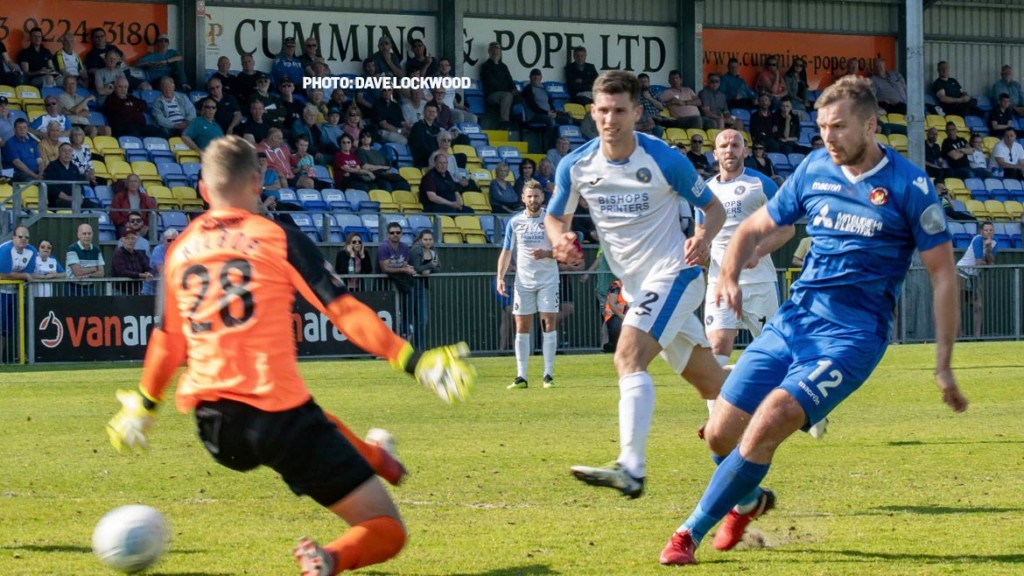 From Black Friday to Good Friday, Fleet’s season has been a rollercoaster and they kept it rolling on with an astonishing 10-minute fightback in the second-half to grab a draw from a three-goal deficit.

Indeed having given up the ghost at half-time, many travelling fans will have been disappointed not to take all three points after both Eastleigh and Harrogate Town fell to defeat.

Four changes were made, two of them enforced with Jack King and Gozie Ugwu suffering from knocks and Corey Whitely and Jack Payne also made way. That meant starts for Dave Winfield and Danny Kedwell while Ebou Adams and Andy Drury were also back in.

Havant started with some decent possession football and Fleet had to be mindful of attacking wide man Dan McNamara and top scorer Alfie Rutherford.

But Fleet forced their way into the game and Myles Weston and Dean Rance both had shots blocked or fly just wide. On 16 minutes Kedwell’s header on to Weston’s feet was cleared out of the six-yard box and the visitors suggested they had more to offer than against Dagenham.

But they went off the boil for a crucial few minutes after that, Havant forcing a number of corners. They scored via one on 21 minutes when the set piece was met by a shot that Nathan Ashmore could do little more than watch bounce off the woodwork and Rutherford pounced to fire home the rebound.

Theo Lewis beat Chris Bush to a ball from 20 yards and slung a dipping effort just over the bar as Fleet looked off the pace.

The visitors should have been right back in it on 27 minutes when Lawrie Wilson did well to carve the ball away from Mike Carter from Drury’s pass and through on goal, he allowed it to bounce for Michael Cheek who somehow steered the shot onto the bar from inside the six-yard box.

Fleet toiled in the warm sunshine after that but Havant were equal to it, Carter sweeping everything before him, and they stepped up their advantage as the break loomed. They went 2-0 up two minutes before the whistle after a good move down the left and the Fleet defence failed to close down the space, Wes Fogden supplying Rutherford to run in and guide a shot away from Ashmore and into the corner.

Disaster turned to calamity in time added on when Fleet should have cleared their lines and Bush was beaten to a ball on the right by McNamara who kept his head to find a yard of space and sweep a well-aimed effort between Ashmore and the near post.

Fleet retreated to boos but re-emerged to launch an onslaught on the Hawks goal. Payne replaced Adams, who had picked up a booking, and the early goal that was the minimum requirement came almost immediately.

A ball into the box was held up by Cheek and played back to Kedwell on the edge of the box whose touch gave him sight on goal and he buried it past Lawrence Bilboe.

That lifeline energised the visitors and they pummelled the Havant box. A second goal arrived on 51 minutes, Cheek making up for his earlier miss with a fine turn on the edge of the box getting him past a defender and he drove a shot home to the jubilation of the 296 travelling fans.

Havant were reeling and moments later, from a central position, Drury accepted a ball that was sitting up nicely and crashed a shot off the underside of the bar. Wilson, following up, headed on target and Bilboe grabbed it out of the air which carried him – but alas not the ball – over the line.

The disappointment of that didn’t last long as Havant buckled on Fleet’s next attack. A corner from the right was attacked by Drury and fell for Sam Magri inside the crowded box and the defender got the important touch to send it over the line for 3-3.

Fleet couldn’t quite maintain such a ferocious tempo and credit to Havant, they rallied again and just about kept the blue shirts at bay. Whitely replaced Wilson as Garry Hill went for the jugular but Havant remained dangerous on the counterattack, Wes Fogden out wide and Rutherford up front keeping the pressure on.

A couple of yellow cards followed as play became scrappy, Rutherford and Winfield receiving a caution each as the former fell to the ground clutching his face after being brushed by the Fleet skipper’s arm.

Winfield had to keep Rutherford at bay on a couple of occasions and twice near the end Fleet had only Payne and Bagasan Graham back to thwart the home side on the break. Kedwell saw a header creep past the foot of the post and Graham got the best of two players before letting off a decent effort that clipped the side netting.

Five minutes of time added on produced nothing more from tired legs on both sides and a most entertaining game ended all square.

Ed Miller has been Ebbsfleet United's communications manager and programme editor since 2014 and responsible for the club website since 2007. Contact him on ed.miller@eufc.co.uk
PrevPreviousPREVIEW: Havant & Waterlooville
NextFleet boss asked his players to “win the second-half”Next